Report of vigil for London bomb victims in Edinburgh

This is a 650 word piece on the vigil for the victims of the London bombing which was held in Edinburgh on Sunday 17th July. 7 photos are attached 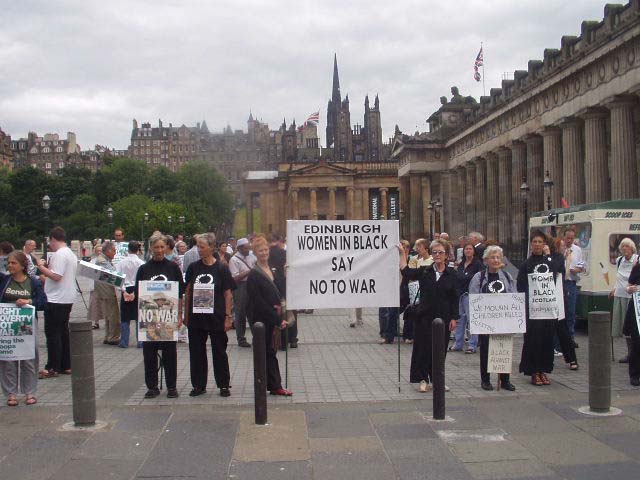 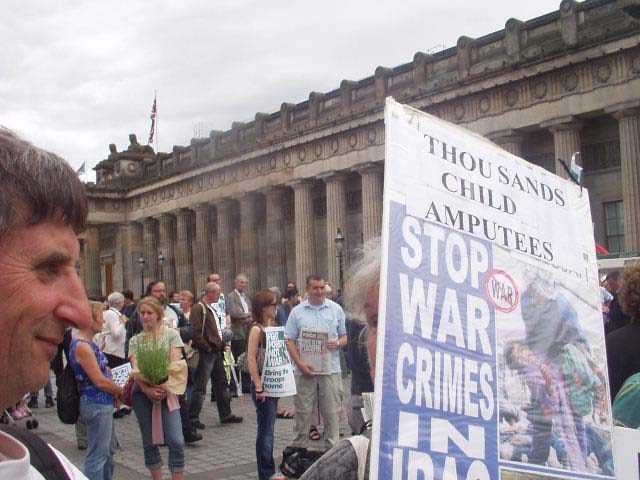 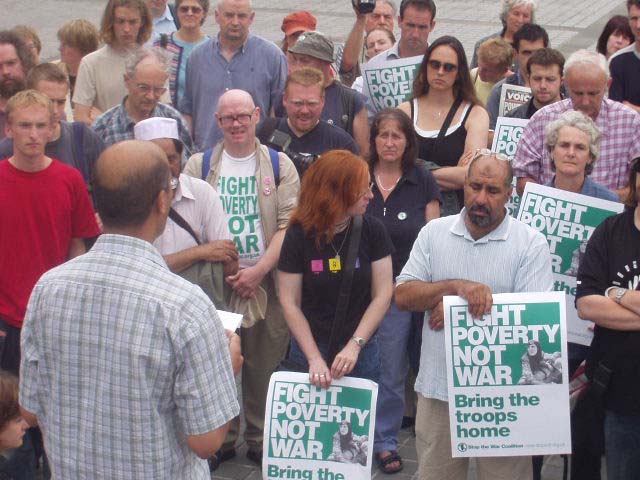 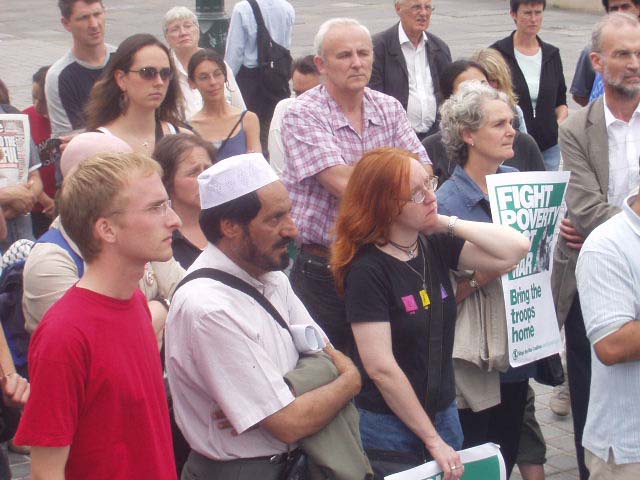 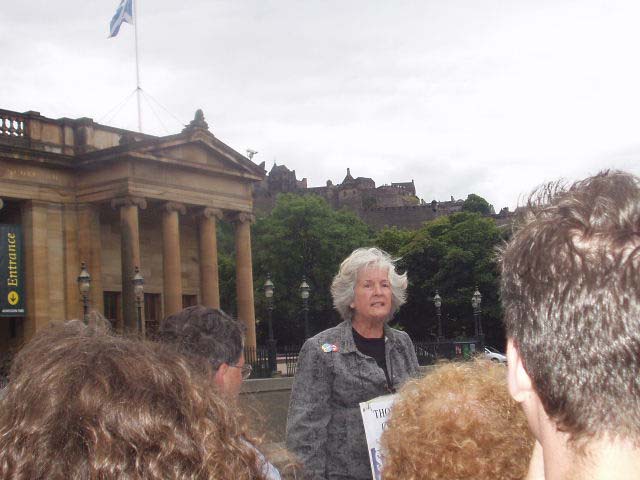 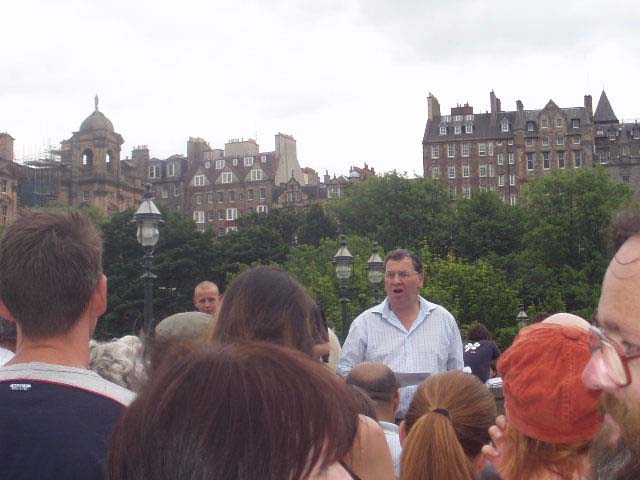 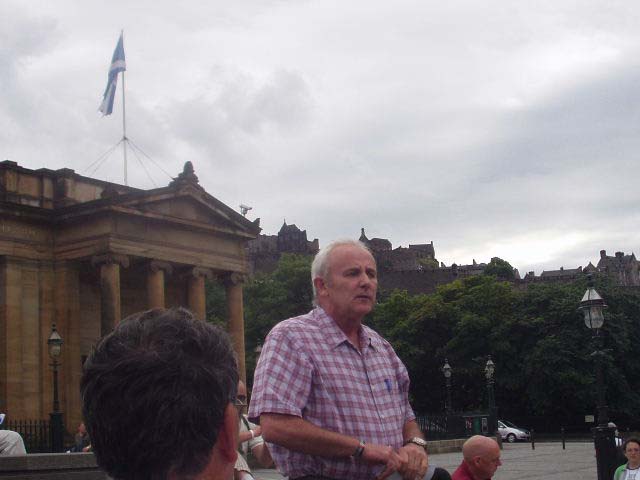 There was a vigil in Edinburgh on Sunday 17th July for the 50 plus victims of the terrorist attack on London earlier this month. The turnout was around one hundred and speakers included the Rev Donald Reid of St John’s church in Edinburgh, Carole Abudaib who lived in Iraq for many years and Mick Napier of Scottish Palestine solidarity.

Carole said that the slaughter in London was horrific and must be condemned unequivocally. There was hypocrisy in asking Muslims to condemn the attack when Christian leaders like Bush and Blair had dropped vast quantities of bombs on Iraq and Afghanistan. She recalled the words of former US Secretary of State Madeleine Albright who said in 1996 that the slaughter of half a million children was a `price worth paying`. She spoke of the atrocity of Fallujah when the inhabitants of a city nearly the size of Edinburgh were given just one week to leave homes that they had lived in all their lives and go out in to the desert. She spoke of the terrible problems caused by the depleted uranium (DU) which was dropped in large quantities in both gulf wars and which has led to a huge increase in cancers and birth defects. Every hospital in Iraq has little or no medicine; there is little or no electricity or drinking water. She even recounted a case of someone breaking in to a house just to steal water because they were so thirsty.

Muslim lawyer Rabia Choudri spoke next to say that the word Islam means peace and that terrorism is contrary to the spirit of Islam. She said that the term `jihad` is a much-misused concept as it can mean a variety of things and not just war.

Eileen Cook of CND spoke to condemn the bombings and was followed by Terry of Stop the War who asked `What is terrorism? ` - The dictionary definition is that `terrorism is the use of violence to obtain political ends` - by that definition is the attack on Iraq not `terrorism`? He said that Stop the War condemns ALL terrorism including the attack on London as well as the attacks on Afghanistan and Iraq. We must mourn the 55 who died in London and the 100,000 who have died in Iraq. He spoke of the election, which were held in January, which were very limited as the ballot boxes were not properly watched and the voters did not know the names of the candidates until the day of voting. The fact that any kind of elections took place was due to the demonstrations of tens of thousand of ordinary Iraqis. He also mentioned the $8.8 billion, which had gone missing from Iraqi oil revenues under the Bremer administration. (Note: this represents about $350 for every man, woman and child in Iraq).

Mick Napier of Scottish Palestine Solidarity was the last speaker and he condemned the shocking attack in London. He said that `we stand for human rights, we condemn all forms of terrorism`. He spoke of the last 24 hours in Palestine when there had been 7 air raids and 8 attacks with tanks and how a 16-year-old boy had been dragged from an Ambulance and left to die. He said that we were told that there was a problem with Islam; well maybe there was a problem with Christianity or at any rate George Bush and Tony Blair’s interpretation of it. They are killing large numbers of people, in contradiction of Christian values. He appealed for everyone in the peace movement to unite and finished by saying, “Friends let’s move forward.”

The vigil finished a little after five O’clock with a reminder that there will be a meeting of Edinburgh Stop the War (www.edinburghstw.org.uk) at 7.30pm on Wednesday 20th July in the Friends Meeting House near the Central Library in Edinburgh.