according to Littlejohn: “The Palestinians are the pikeys of the Middle East. If they must have a homeland, give them part of Saudi Arabia, because the Egyptians, the Syrians, the Jordanians and the Lebanese don’t want them either”. Immediately after the above paragraph, he writes: “No more hand-wringing. It’s time for neck-wringing”. 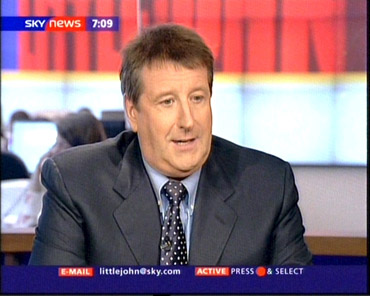 On July 22 the Sun's regular columnist Richard Littlejohn came perilously close to inciting hatred against Muslims and Arabs. He justified ethnic cleansing against the Palestinians and made fun of the suffering of millions of Iraqis.

On Israel and Palestine, Littlejohn’s comments are so extreme one would not expect to hear them from Israel’s far-right. Even Ariel Sharon, Israel’s Prime Minister and war criminal, recognises that the Palestinians have a right to some form of statehood (he certainly does not advocate transferring Palestinians to Saudi Arabia), but according to Littlejohn:

“The Palestinians are the pikeys of the Middle East. If they must have a homeland, give them part of Saudi Arabia, because the Egyptians, the Syrians, the Jordanians and the Lebanese don’t want them either”.

Immediately after the above paragraph, he writes:

Littlejohn’s comments are totally insensitive to the hopes and aspirations of millions of Palestinians in the Middle East who, according to the International Court of Justice, have a right to self-determination (in Palestine and not in Saudi Arabia). Most of these people are refugees who have no civil and political rights, and whose human rights are frequently denied them. And yet here we have Littlejohn abusing those freedoms to peddle falsehoods about the Palestinians.

Arabs don’t need any “neck-wringing” from people like Littlejohn, whose views go against British policy for peace in the Middle East based on the “two-state-solution” and UN Security Council resolutions 242, 338, 1397 and 1515.

Littlejohn’s comments on Iraq are also totally insensitive. Here is a little taster:

“If Iraq has anything to do with the bombs in London, it is at best peripheral – just another codicil (addition) to a catalogue of imagined grievances used to justify serial murder [emphasis added]”.

“If these maniacs really cared about Muslims in Iraq they’d have been blowing themselves up in Baghdad when Saddam was still feeding thousands of his co-religionists into the tree shredder and dropping mustard gas on Iran and Kurdistan”.

On Islam and the London terrorist atrocity:

“The other good news is that yesterday’s terrorists didn’t have 72 virgins on their dance card. They chucked their backpacks and legged it. So maybe there aren’t as many recruits willing to End It for Allah as we have been led to believe [emphasis added]”.

On the Arab world and torture:

“We are currently being treated to the thoroughly demeaning spectacle of a British minister swanning around the Middle East trying to elicit assurances from sovereign governments that in the unlikely event of our actually agreeing to their requests for the extradition of wanted terrorists, currently living in London council accommodation, they won’t be subject to the death penalty or electrodes on their goolies.”

“Frankly, who gives a damn?”

“Put these lunatics on the night boat to Cairo and let the Egyptians, Syrians or whoever do what the hell they like with them”.

Arab Media Watch totally condemns the 7/7 atrocities and the attempted attacks on July 21, and all forms of violence against civilians, anywhere, irrespective of race, culture or creed. We also condemn all those who incite violence against their fellow British citizens.

But it is simply unacceptable for the Sun to give someone like Littlejohn a national platform. Palestinians are not the “pikeys” of the Middle East, and Littlejohn is factually incorrect when he writes that the Egyptians, the Syrians, the Jordanians and the Lebanese don’t want the Palestinians. In fact, most Jordanians are of Palestinian origin. In Syria, Palestinians are treated in almost all respects like Syrian nationals, and in Lebanon the new government is talking about integrating Palestinians into Lebanese society. The reality is that in an ideal world, most Palestinian refugees would like to return to their homes from where they were expelled in 1948 and 1967, a right that is enshrined in international law and embodied in UN resolution 194 (III).

When Littlejohn’s politics are to the right of Sharon, something is amiss. For those who need reminding, Sharon was implicated in the mass-murder of 3,500 Palestinians in Beirut in September 1982.

We urge you all to complain to the Press Complaints Commission, to the Sun and to Littlejohn. Write to

richard.littlejohn@the-sun.co.uk. If you want your letters to be considered for publication, say so and provide your full name, address and contact details (the latter 2 will not be published).

Please remain polite and concise, and refrain from copying this Action Alert word-for-word as long, offensive, identical or very similar letters will be disregarded by media outlets and journalists. Bcc letters (which will remain confidential) to

info@arabmediawatch.com. Letter-writing tips are at:

To complain to the Press Complaints Commission, go to: