Photos of Vigil and Demonstration Against "Shoot to Kill", Monday 25 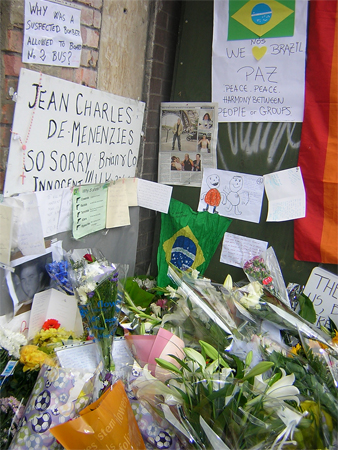 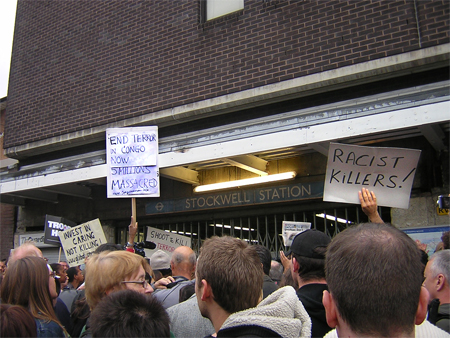 Part of the crowd in the vigil 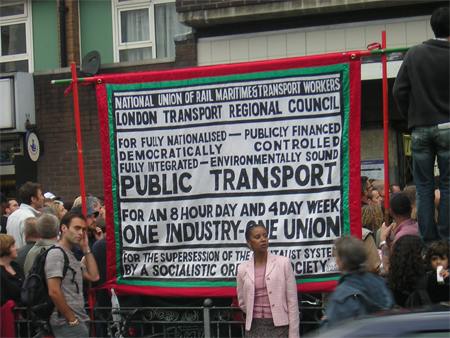 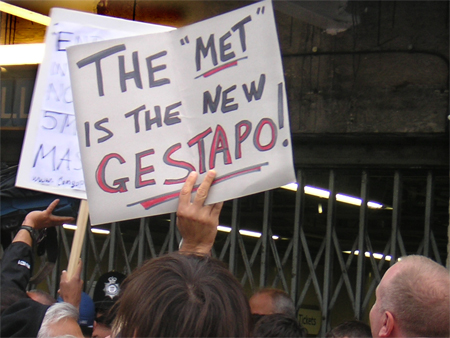 The placard says it all ... 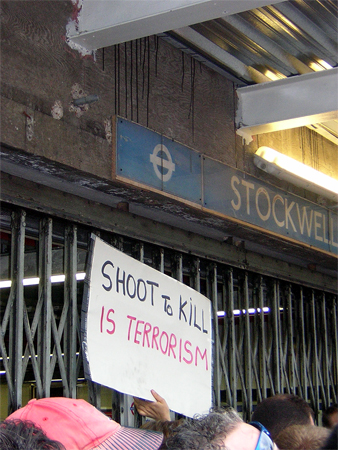 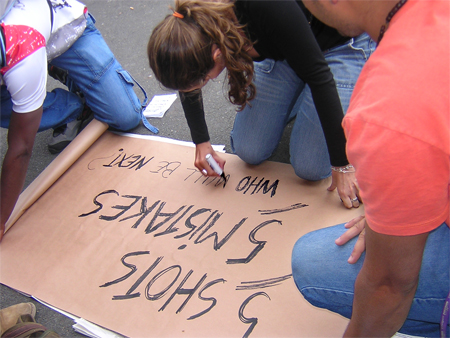 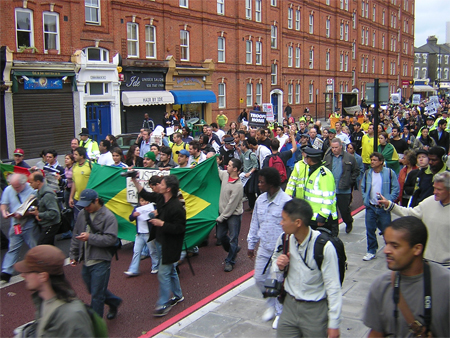 View of the demo in South Lambeth Road 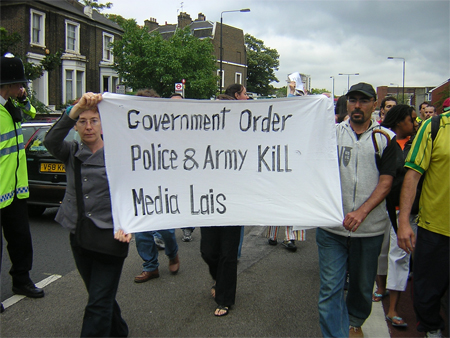 A banner in the demonstration 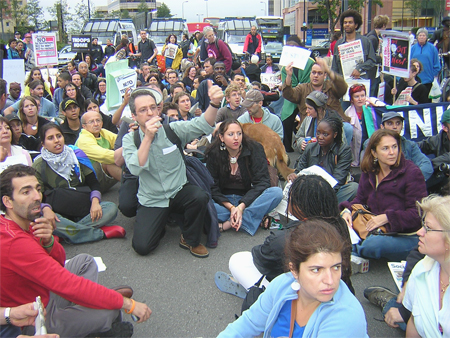 Sit down protest in Vauxhall 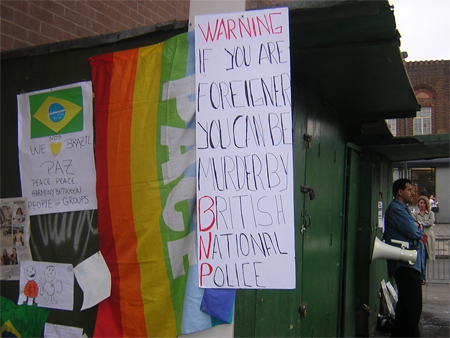 The vigil was initially called by South London Stop the War Coalition, but soon it become a non partisan expression of solidarity with the family and friends of Jean Charles, as well a show of outrage against the state sanctioned current policy of "shoot to kill", as members of the local Brazilian and Latin American communities took the initiative and started an impromptu demonstration towards the headquarters of MI5 and MI6 in Vauxhall.

Police seemed to be taken by surprise when around 300 people made a quick move to the middle of the road, and so the crowd started to walk down South Lambeth Road towards the river.

With a mixture of crowd determination, as well as police soft tactics (possibly under orders to be "nice' and "respectful" given the circumstances) the demonstration made it all the way to Vauxahall. At some point three police vans arrived to the scene, but were kept behind the demonstration as police moved in lines at both sides of the demo.

Once in Vauxhal cross, and just in front of MI5 building, police finally made a cordon and prevented the crowd from moving forwards. At this point people sat down in the middle of the road for a few minutes whilst doing minutes of silence in remembrance of Jean Charles de Menezes. By this time a massive deadlock of cars had been mounting around Vauxhall, so police started to be more eager about moving the crowd out of the middle of the road.

Eventually people was pushed back into the pavement where minor scuffles broke out when some protesters tried to cross the police line and push forwards towards Vauxhall bridge.

At the end, police encircled the remaining group of people but let out anyone that wanted to leave. Eventually the crowd dispersed without any arrests.

Here there are some photos ...

The Sun newspaper has been the biggest supportter of the war on terror, the war on Afghanistan and the war on Iraq, while at the same time slandering the anti-war movement and prominent anti-war activists like George Galloway as traitors. It is about time a mass picket of the Sun newpaper was called!

I think we should have an occupation of The Sun's offices. Who is up for that.

The Sun would absolutely love you to _try_ to occupy their offices in Fortress Wapping. They would dine out on it, quite literally, for months. Have you ever seen the place?

When you've finished there, how about going after the racist scumbag Gestapo _B_ritish _N_ational _P_olice in New Scotland Yard? Surely justice demands that Ian Blair hangs from his own entrails from the flagpole?

...why don't you get on an aircraft, fly to Rio, and occupy the offices of a state newspaper instead. You can then protest at the murder of street kids by the Brazilian police. (The kids aren't suspected suicide bombers, they are just hungry and steal to live).

I should point out though that the police there are NOT accountable (whereas ours are).

Are you up for that?

No? why not? Is it because physical risk is involved and the police there might make you disappear.

Okay then, you go play Revolutionary Street Warrior with your friends and occupy the Sun offices in a country where the most you'll get is community service (not a bullet)
You can use the time to grow a spine whilst you are at it.

Okay then. Is there a much more eco-friendly way to get to Brazil though? Mind you, I can't think why there is hostility to wanting to occupy the offices of The Sun, as though by not being responsible for murdering innocent Brazillian children doesn't exonerate them from being scare-mongering rascists! This is the newspaper that hates foriegners but is owned by an Australian born US citizen? I am not even going to go on about its sexist drivel and anti-gay propaganda.

why do you feel the ened to attack Louise for making a (good) suggestion.? you sound scared.!

sure those awful things go on in Brazil and they're horrific... so tell me what you're doing about it, or anything else for that matter... strikes me that you're all mouth and no trousers... there are people in all countries who are concerned, worried, saddened etc. wondering what to do about their situations and those of others.. to call a concerned person spineless is less than pathetic.

So yes - let's move to get the Sun shut down for inciting racial hatred. and then let's move on to other areas.. they're all connected..

Brazil is a corrupt country of course, full of wonderful people and some who aren't... hmmm .. sounds like all countries... it's only the levels of brutality which varies, but the concentration of power structures remain the same throughout.

so we're fortunate enough by fate not to be born into some of those systems.. as Aung San Suu Kyi of Burma says "Please use your freedom to promote ours".

so, not sure where your anger comes from.. but how about moulding it into a positive force and join with others and do something, instead of boring us all with your spittle.