One man confirmed dead as riot police hurl tear gas into tents and vehicles on Friday night (29th July) in their 2200 hrs raid of the legal CzechTek site. 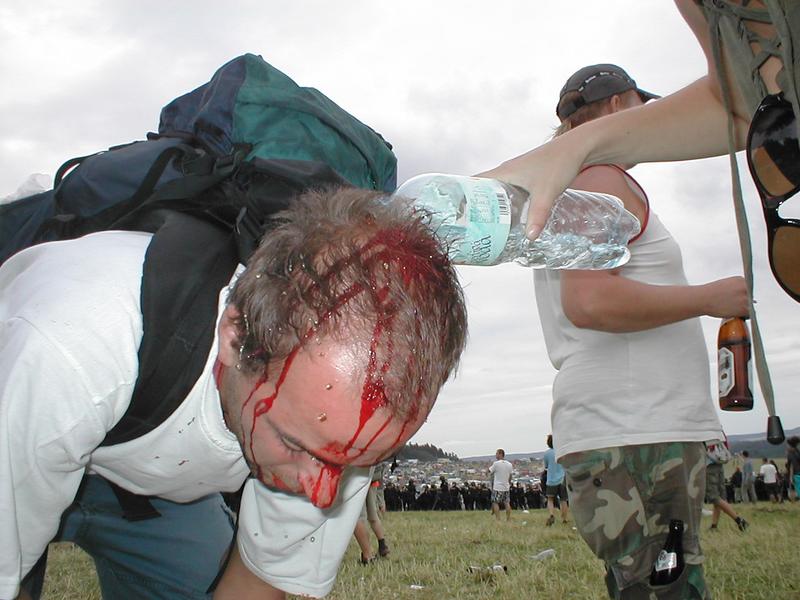 "Czechtek is open-air international and multicultural music festival with 12 year tradition. Not only different genres of music, but also videoart and other art performances take place on this unique event of free culture.

In all history of festival there were no significant damages or problems, participants while leaving clean the land and take responsibility for
their action.
The contract with the owner of grass plain was clearly shown to police. There is no indicaion that festival was in any way illegal, every aspect was according to law of Czech Republic.

Although police stated throughout friday 29th several different reasons for blockage of access to the place of festival, all were later shown as lies or desinformation. The final reason for brute attack was "threat of damaging the surrounding private pieces of land".

The presence of attending young people on surrounding land was caused by police blockage of all roads and the police action was not taken against this people, but against the people on legally borrowed property.

A woman from near willage, owner of adjoining land, said she had been woken up by police friday morning, long before people began to arrive, taken to police station and by false arguments encouraged to sign complaint.

Most of the people did not hear any appeal to leave the place, many of them had drunk alcohol-containing beverages and could not go away with cars, many of them believed that by taking part on legally organized festival they cannot be targeted by police.


The first police action on saturday 30, 16:30PM took several hours and was badly coordinated. On the place was 1000 policemen, water cannon, armoured tank and low-flying helicopter.


The second night attack at 22PM was led with extreme brutality.


Police used massive amounts of tear gas and desorientation grenades, in many cases they threw tear gas granade into a car and did not let people inside for long time get out, in other cases they broke car windows by iron bars, threw grenade in and forced people to get out. All people were beaten up, including teenage girls, which cried in pain. Witnesses described attack on lone staing girl, who was pulled down by her hair and kicked on the ground by four policemen.
There were hundreds of injuries, including cuts, bruises, burnings, broken arms, shock. Many people were in shock still the next day afternoon with
red faces from tear gas.

Police intentionally damaged cars, electronic equipment and other
property. Attack was led with clear intention to cause injuries.

People were forced to go to near highway, which was closed several hours and then the waiting trucks were allowed to go dangerously among the desoriented people.

Police confirmed death of young man attending the festival. Reportedly he was killed by a truck which left. The reason of this death can be manipulated by police, no witnesses were found to [verify] the police statement.

Police brutality continued on scattered people till the sunday morning.

Czech state television Czech TV did not inform about the night attack, it's news were not balanced, mainly repeating police statements. Czech TV in its news also under estimated political value of call of freedom and resignation of minister of interior on sunday's demonstration in Prague, reporting briefly about techno-goers.


This is a call to foreing media to publish information about unlawful
police brutality and state of democracy and human rights in Czech
Republic."
THE ABOVE REPORT WAS TAKEN FROM THIS LINK:

Below are links to websites with endless photos clearly showing the extreme police brutality.

Below is a film taken at one of the road blocks where police beat a traveller to the ground for no apparent reason and then threaten the rest of the crew with guns:

31.07.2005 | and calls for the immediate resignation of Interior Minister Bublan

On the basis of information from news reports and participants in the event at Mlýnec pod Přimdou in Western Bohemia, the League of Human Rights must express its condemnation of the brutal police intervention there.

The police have encroached upon rights guaranteed to all by the Charter of Fundamental Rights and Basic Freedoms (1) in a manner which is completely unacceptable for a democratic state:

1. Without any legal justification, the police restricted the freedom of movement of persons who were peacefully in transit on the public roads.

2. The police as an agent of public authority illegally and brutally infringed upon the private contract between the lessor of the property and the organizers of the dance party. By so doing, the police made it impossible for the purpose of the lease to be achieved and thereby caused damages to both contractual parties.

3. By erecting an illegal barrier to the lawfully leased property, the police artificially escalated the situation. This resulted in conflict which could otherwise have been avoided.

4. The police used completely inappropriate methods, given the situation, and during the intervention injured several dozen people.

In contrast to the organizers of the event, who leased the property in good faith as a result of last year’s problems, thereby demonstrating their desire to meet the legal requirements, the police decided to place themselves above the law for reasons which are neither understandable nor acceptable. Under the rule of law the police may not presume that participants of a private event are going to behave illegally.

The League of Human Rights calls upon Interior Minister František Bublan to recognize his responsibility for the completely inappropriate and illegal intervention committed by the police and to immediately resign.

The League further demands that all police officers responsible for this illegal intervention be held accountable and their victims compensated. The League recommends all victims of police brutality to contact other witnesses as soon as possible, to have any injuries examined by a doctor and a medical report issued. Victims of this illegal police intervention who want to file criminal charges against the police may contact the League lawyers on +420 608 719 535 or by e-mail at