This is an 800 word report from Jan Benvie who is currently in Baghdad with Christian Peacemakers. One photo which features Jan is attached. 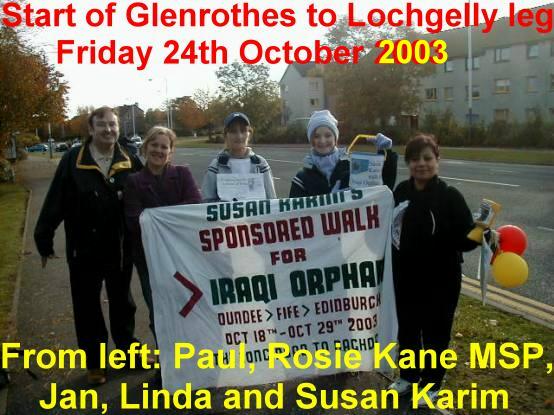 Jan Benvie is in the middle of the group of 5.

I spoke to the CPT (Christian Peacemakers) team in Baghdad today (Thursday 4th August) and they told me of the awful, trying heat and how they only had 5 hours of electricity a day and had to drink bottled water. Remember they are luckier than most Iraqis as they have a generator; most Iraqis don’t even get 5 hours electricity a day. The streets of Sadr City (formerly Saddam city) has pools of sewage in the streets. Jan Benvie, from Kirkcaldy in Fife, is there for 6 weeks and here is one of her reports. I don’t have any of her photos from Iraqi but I am attaching one from the Susan Karim walk for Iraqi orphans in October 2003 which features Jan (in the middle of the group of 5).

Well, it's Friday 29th; so I thought I would use some of my free time to tell
you what I, and the rest of the team, have been doing the past week.

It's been a week of going to Ministries or government offices, and not always
getting anything done. Things take a long time to happen here, something Iraqis
agree with. They, like me, are frustrated by the pace of change. Unlike me, this
is their whole life.

On Sunday Greg and I went to Sadr City to meet with community leaders and go to
the local hospital to get information about the health problems caused by dirty
water and sewage in the streets. We were told the leaders had gone to a funeral,
but we were able to visit some people in Sadr City and take some photographs.
The response in the streets was amazing. The conditions were horrific (I am
writing a separate reflection on it which will be sent out soon) and people were
eager for us to publicise their living conditions. Although Sadr City has a
reputation for being a dangerous place, we felt very safe. You see very few
people with guns. The Sadr Movement seems to have a strong community base, and
therefore community support, not the violent rebels our press seem to depict
them as. I went back again on Tuesday with Peggy. This time we got as far as
the hospital, but the Director could not speak to us without a letter of
permission from the Ministry of Health!!! It was too late to go to the Ministry
by the time we got back to central Baghdad (travelling around Baghdad is a long,
hot and tiring experience), so that was the job for Wednesday. Not that we got
the letter, but the promise of a letter!! However, we met a Dr at the Ministry
who invited us to a meeting on Sunday looking at the problems in the health
service in Iraq (which are many). I know they are looking for help with drugs,
equipment and training, so if you know of anyone who would be interested and
able to help I would happily pass on information to them.

I have also had several visits to the Residency Office this week to get my visa
extended. I could not tell you how many hours in total that has taken!!

There have been quite a few sobering moments this week. I have already mentioned
Sadr City. On Monday we were wakened just after 6am by a large explosion that
shook our building. It was a car bomb a few streets away, targeting a hotel
frequented by western journalists. We had received a telephone call the night
before from a friend to say she had heard that NGOs were going to be targeted
again, so between that and the bombing, things felt tense.

It's no bad thing to be reminded of the dangers, as being vigilant and cautious
is very important.

When we were at the Ministry of Health on Wednesday we passed the morgue. There
was crowd outside, people waiting with coffins on roof racks, or in the back of
vans and trucks. Some were angry, some weeping. One van had a picture of Iman
Ali, so the family were obviously Shia Muslims, one coffin had a Christian cross
on it, no doubt there were also Sunni Muslims there - death does not
discriminate.

Good news, perhaps On Thursday afternoon we heard that the Palestinian men had
been traced to a prison, and went to talk with the family.

When we visit the Ministry of Human Rights and when we talk with detainees we
hear stories about torture and beatings of prisoners. Sometimes people are
arrested and weeks or months later they are discovered in the morgue. We do not
know yet what will happen to the Palestinians, but their family are relieved
that at least they are alive.