Food Not Bombs will be serving free vegan food at the Hiroshima - Never Again Free Festival at Millennium Point in Birmingham this Saturday 6th August. The festival is from 2pm until -7pm and free tasty vegan food will be served from 3pm onwards! 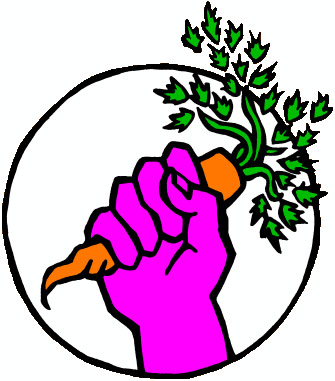 Food Not Bombs began as an effort to feed anyone who was hungry. Today, there are close to 200 chapters of Food Not Bombs all over the world. Each chapter collects surplus food that would otherwise go to waste from grocery stores, bakeries and markets, then prepares it into community meals which are then served for free to anyone who is hungry.
Birmingham Food Not Bombs is a recently formed collective and has served free vegan food at several events in the city centre, at the recent sleep-out event in support of homeless refugees, and at a civil liberties and human rights conference.

The central belief behind the group is that a) if governments and corporations around the world spent as much time and energy on feeding people as they do on war, no one would go hungry, and b) that there is enough food in the world to feed everyone, but so much of it goes to waste needlessly, as a direct result of capitalism and militarism. Food Not Bombs also tries to call attention to poverty and homelessness in society by sharing food in public places and facilitating gatherings of poor, homeless and other disenfranchised people. There are three tenets to the Food Not Bombs philosophy: food recycling, consensus decision making, and nonviolence. Anyone who wants to cook may cook, and anyone who wants to eat may eat. Food Not Bombs strives not to be exclusionary. We welcome new members to the Food Not Bombs collective, to get involved use the email address below.