HICKS: Not a Happy Birthday! 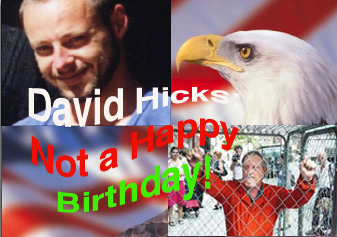 Imprisoned and tortured for 3 years and 9 months!

AUSTRALIA/CUBA/US :David Hicks, the Australian imprisoned at the US Base of Guantanamo Bay, will be 30 years old this coming Monday August 7, 2005.

Justice for Hicks and Habib campaigner, Marlene Obeid, said: 'David has been imprisoned and tortured for 3 years and 9 months now. Another birthday in the hellhole of Guantanamo -- nothing to be happy about.'

Mr Hicks' Australian solicitor, David McLeod, found in a recent visit to the US Base that his client is losing his eyesight, has severe back problems, and his mental condition is rapidly deteriorating.

The British Government successfully negotiated the release of nine Britons held imprisoned at Guantanamo. Five were released in March 2004, while the last four were released in January 2005. None of these were charged in spite of US Military officials alleging that four of them were trained and involved in military activities in Afghanistan.

A US citizen, Yaser Esam Hamdi, who was captured in similar circumstances to David Hicks was freed in September 2004 after two and a half years imprisoned, and agreeing to renounce to his US citizenship and renouncing to terrorism.

The Australian Government in February said the US military said it was preparing to release Mr Rafiq because it no longer considered him a security risk.

As the Australian media focuses on Douglas Wood, the Australian currently held hostage in Iraq, concerned about unfair deprivation of liberty, the plight of three other Australians, David Hicks, Ahmed Aziz Rafiq and Mamdouh Habib, has been largely forgotten.

September 11, 2001, caused many to reflect upon the fundamental values on which this country was founded: freedom of speech, respect for human dignity, freedom of religion, justice for all, tolerance. It is imperative that the United States stand for the principles of unalienable, universal rights. Otherwise, those who wage war on human rights will have won the battle against freedom. Amnesty International is concerned the "war on terror" not become an excuse to deny human rights.

The agenda and the form of the conference is now open. Papers can be submitted by emailing:

The following are themes to be explored and expanded at the conference:

* The Politics of Imprisonment

* Post Carceral Resettlement
Organising Inside: Prisoners' resistance and the Outside Community, Writing and Art as Resistance, Barriers to Reintegration, Surveillance, Organising in the Community - Exprisoners' Organisations, Convict Criminology.

* Action Now
Proposals for the future.

* Registration and Workshop participation
To register for the conference or express interest in participation, please use the following - email form.

Tasmania is an ideal place to discuss punishment. It used to be called Van Dieman's Land, and was the place where most of the original convicts were sent from England from 1788 until the 1850's. It was the ultimate as a penal colony, was almost entirely a prison, and changed its name to avoid the historic shame. It had penal settlements where convicts were tortured - all well documented. And the convict responses are very special learning experiences, still valid today.

The agenda and the form of the conference is now open. Papers can be submitted by emailing:

icopa@justiceaction.org.au. The following are themes to be explored and expanded upon at the conference: The Politics of Imprisonment, Contemporary Forms of Penal Custom, Post Carceral Resettlement and others.