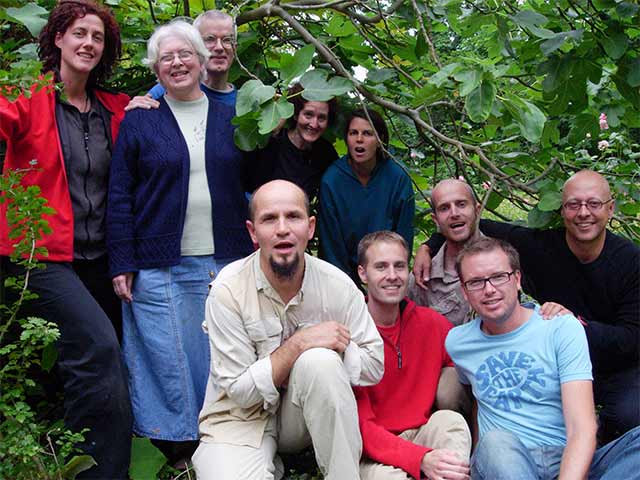 In the early hours of Friday 5th August, nine peace gardeners from Europe
and Australia planted vines and fig trees inside and outside the Atomic
Weapons Establishment at Aldermaston, UK, transforming it into a garden of
peace and justice.

Calling themselves the Aldermaston Vine & Fig Tree Planters, the group
arrived at dawn, cut a garden gate in the perimeter fence and entered
carrying spades, trowels, watering cans, five vines and five fig trees,
which they proceeded to plant. Arriving police were offered a choice of
grapes, fig rolls, grape juice or wine. Some of the police chose the grapes
and then arrested all nine on suspicion of criminal damage to the perimeter
fence.

After a day’s questioning in nearby police cells, all nine were charged that
“without lawful excuse, [they] damaged a section of the outer perimeter
fence… to the value of £500 belonging to The Ministry of Defence”. One
gardener was released, whilst the other eight, who all gave their address as
“Aldermaston,” were remanded in custody overnight. The eight will appear at
Reading Magistrates Court at 9.30am on Saturday 6th August – Hiroshima Day –
for a bail hearing.

The previous day, Thursday 4th August, ten gardeners had planted a vine and
a fig tree outside the main gate of AWE Aldermaston and informed the
authorities of their intention to return and continue the peaceful
conversion of the base.

In a joint statement given to police on both the 4th and 5th of August, the
eleven say:
“On the eve of the 60th anniversary of the bombings of the people of
Hiroshima and Nagasaki, we come to the Atomic Weapons Establishment at
Aldermaston, UK, to plant vines and fig trees.

‘They shall beat their swords into ploughshares and their spears into
pruning hooks. Nation shall not lift up sword against nation, neither shall
they learn war anymore. Instead, everyone shall sit underneath their vine
and fig tree and none shall make them afraid.’ (Micah 4:3)

Disarmament, economic conversion and nonviolence are vital ingredients for
creating a just world in which everyone enjoys the earth's abundance.

In these fearful, suspicious times, we invite people all around the world to
transform military bases into gardens of peace in which beauty and life
shall flourish.”

Supporters will gather outside Reading Magistrates Court at 9.30am, Saturday
6th August.

Messages of support are welcome, and the eleven extend their love, support
and action to all those remembering the bombings of Hiroshima and Nagasaki.