Well, there I was at 3.30pm this afternoon, travelling down the Nottingham Road, passing the junction of Gregory Boulevard, when four police cars including the heavy mob, and some Armed Responce Units, pulled over a bus. I didn't know what was going on to start with, but like most citizens, am quite concerned to be confronted by guns on the streets. 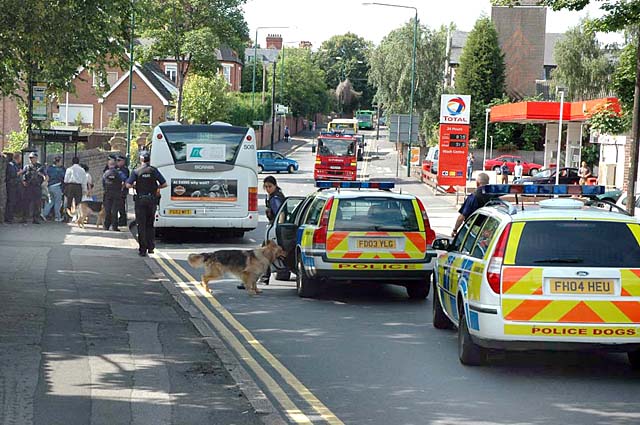 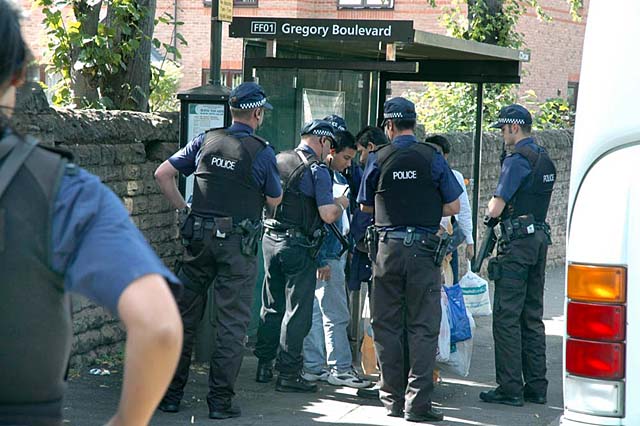 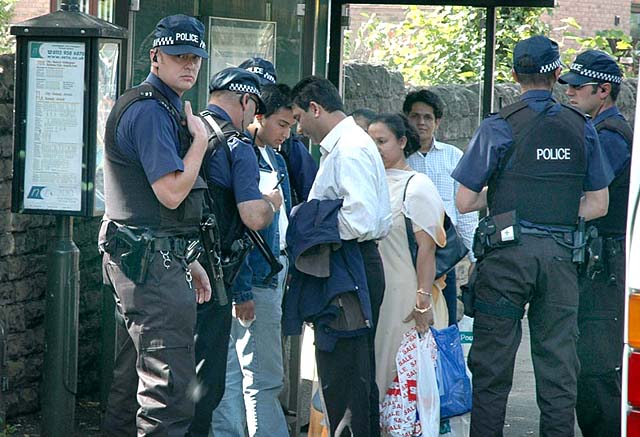 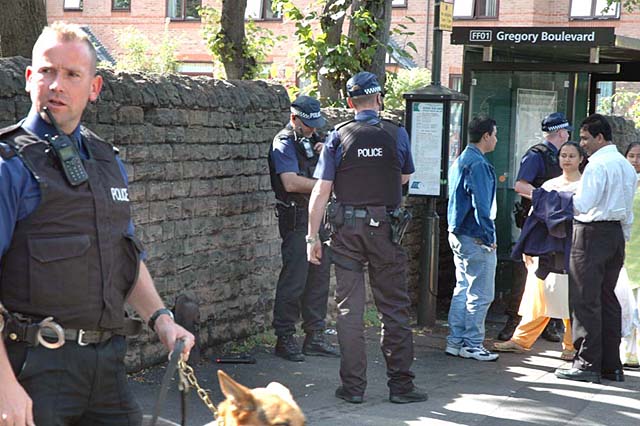 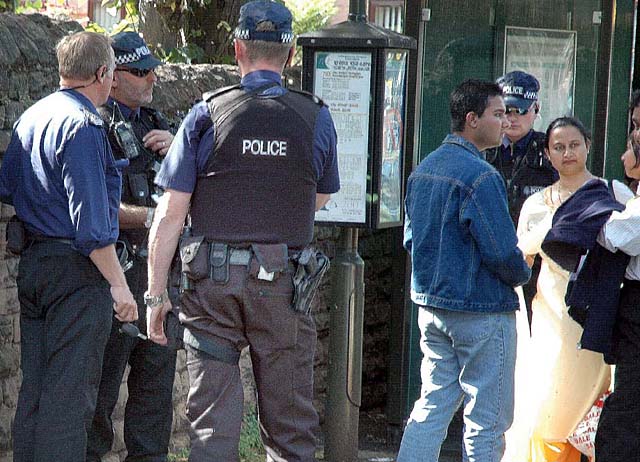 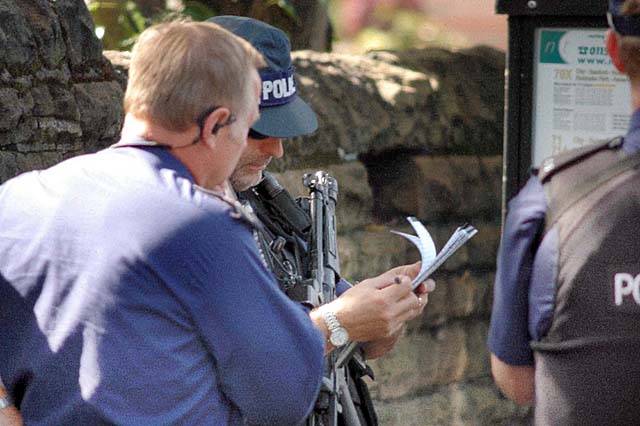 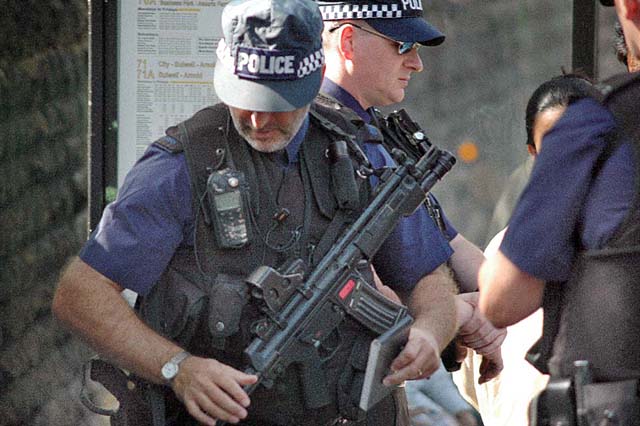 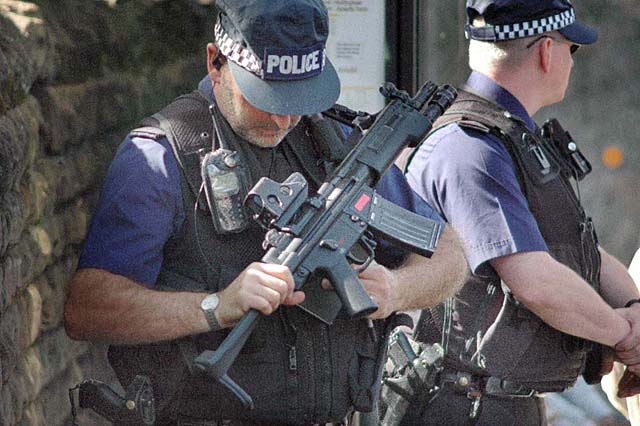 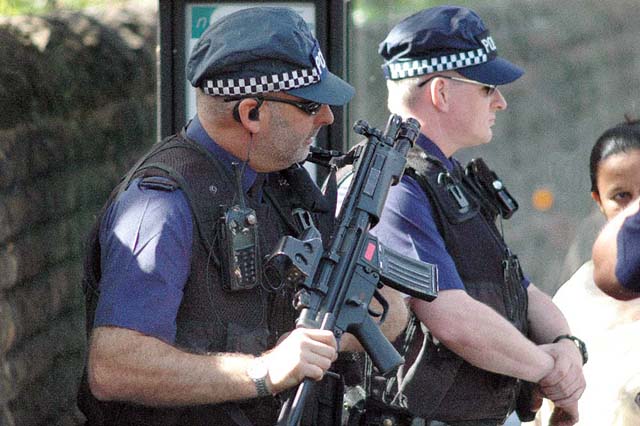 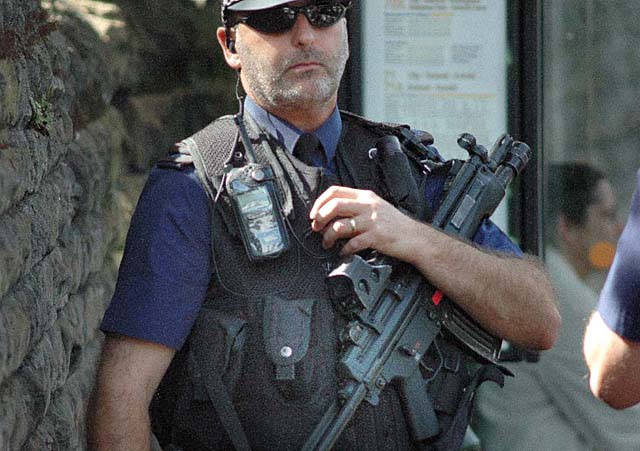 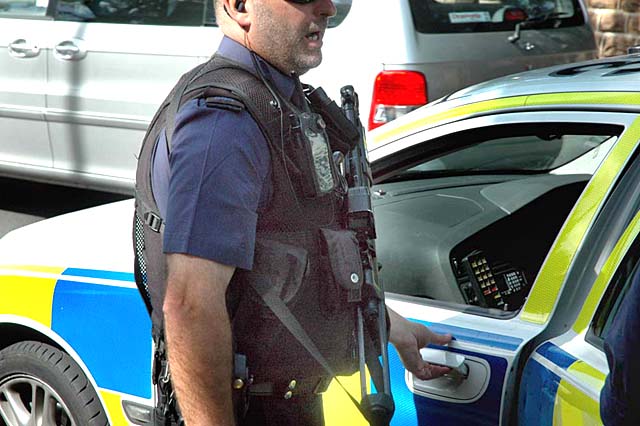 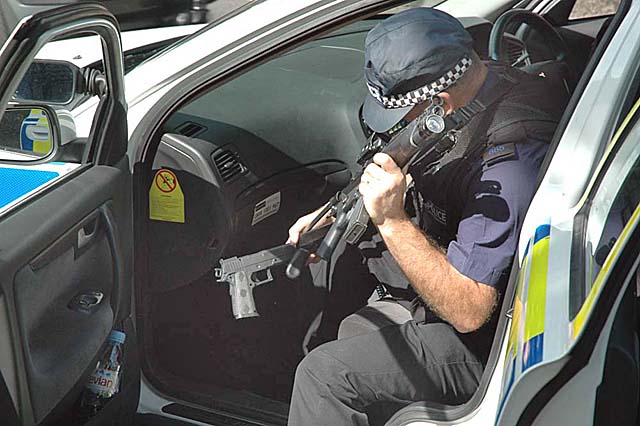 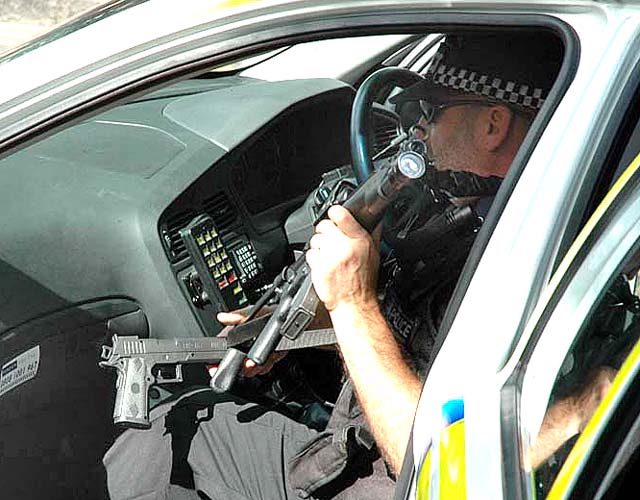 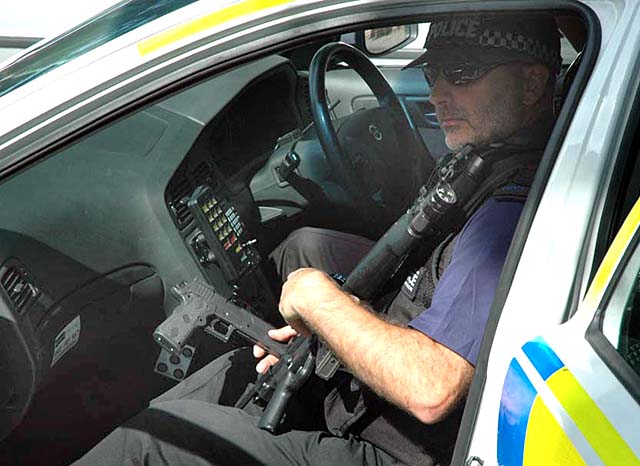 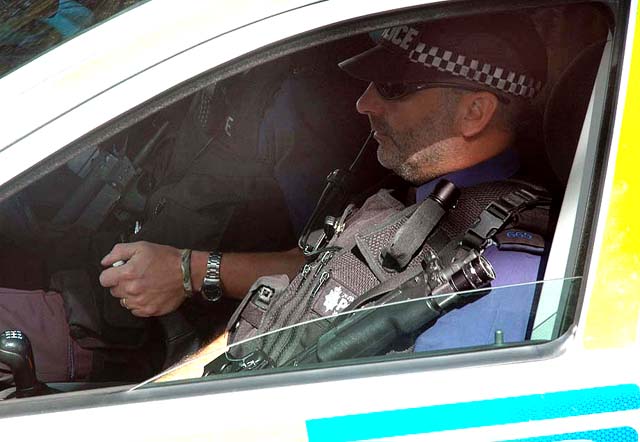 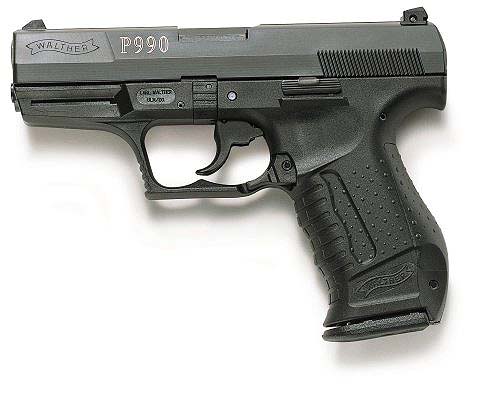 Another 'armed' turnout' of Nottinghamshire Police. [another false alarm]

We really are on a 'short fuse' after the terrorist attacks in London and ensuing panics.

Last month, I described, dear readers, that people were reporting suspicious packages all over the place. There were many scares all over the country. Here was one I happend apon:

Well, there I was at 3.30pm this afternoon, travelling down the Nottingham Road, passing the junction of Gregory Boulevard, when four police cars including the heavy mob, and some Armed Responce Units, pulled over a bus.

I didn't know what was going on to start with, but like most citizens, am quite concerned to be confronted by guns on the streets.

I photographed what I could. The incident only lasting a few minutes. When the guns had gone, I asked a seargent what was at issue. Apparently someone had reported seeing a man with a gun on the bus. Turns out to having been a toy gun. This is of course, a frequent reason for armed responce turnouts.

Now, in these times after recent events, some sections of the population are getting more police attentions than others and some folks are looking at people of a wide variety of ethnic origins with suspicions.

I asked the officer, since he mentioned 'these times' what was the ethnic origins of the people concerned here, but he declined to answer, saying that it wasn't relevent.

I quite agree with him, it shouln't be should it? But it is relevent now. The Chief Constable of the British Transport Police has said that he's not going to waste resouces in stopping and searching white old ladies.

Anyway, if you look past the police 'scrum' in the bus stop, you can see who the subject is. Low and behold, it's an south asian family.


Nottingham Peace rally in response to the London bombings

There have been a number of protest marches and meeting in Nottingham. In common with many other cites, there has been a surge increase shootings and gun crime in general. This last week, I've been looking further into the situation. Both the reports of the shootings, mostly 'Black Youth' and the police response to it.

So much has been written, and I'll add my 'nine-pence worth' in due course. But I have collected these links together as a set, to give an idea of the scale of the developing situation. Read, and be depressed!

American readers, might of course, wonder what all the fuss is about. Shooting folks is normal, ain't it?


Gun law : Britain's police are famed for walking the streets armed with nothing more lethal than a truncheon.
But now, for the first time, bobbies on the beat in two violent districts of Nottingham are carrying guns. John Kampfner asks, is this the shape of things to come?

They have produced guidelines and have released the first six chapters of the Manual of Guidance on Police Use of Firearms. available here as PDF

Chapter 2 Use of Force

Chapter 3 Issue and Carriage of Firearms

Chapter 5 Use of Firearms

Facing Violence: The Response of Provincial Police Forces
A Report of Her Majesty's Inspectorate of Constabulary Inspection 1995

INQUEST's statistics on fatal shootings can be found at:

Mothers Against Guns on my blog at:


There are two previous enties on my blog about all this.

There has been a rise in the number of shootings lately, both in Nottingham, and British cities at large. It is terrible, and, something must be done! This was the objective of the march and the public meeting.

However, from some of these notes; you might see that the police themselves are more than fallible, in their dealing with the situation. Further, the amount of firepower currently deployed is scaring the blue-blazes out of many of us. Hence I offer you these links, to give you an idea of the scale of difficulties that they, and we are under.

All this is not at all, perculiar to Nottingham. Just as a sample, here are a couple of links to some similar stories on Bristol Indymedia UK


I'm not so sure, that the police can be trusted to do guns. Check these out:


Research in Nottingham Libary Regarding the police use of weapons

I went to Nottingham City Library, to look up previous instance of the previous loss of ammo and weapons by police in the county. I know of instances in 2001 with the loss of another magazine and 1995 when they lost five hand guns out the back of a van. The doors were open, while they drove along, 'cos it was hot, apparently!!

Checked back though their cuttings archives and nothing was there. I asked an assistant about it, and , apparently they only keep 'important cuttings.'

I composed myself, and asked to speak to a senior archivist. She said; we mainly keep cutting of 'policy changes' rather than 'incidents'. And "Yep, I agree, it does seem we've been 'kind' to the police!". She also remembered the story from the time, [thus if she remembered 8 years later, chances are it might have been important!]

As a senior troublemaker, I told her there and then, that I would be grateful if that policy could be changed immediately, to take into account, what are self-evidently serious matters, that should result in 'important cuttings' and would be taking it up with the Nottinghamshire Senior Librarian next week. [watch this space].

Oh god!! I mean, bloody heck, my whole life is like this. So there's another couple of hours next week, to account for all this .. .. ..

This is all a bit outside my usual subjects.
But hey, It needed doing.


Hope you all find it useful. No doubt the police will find my interest in all this, 'interesting!'