Now we have to be on the lookout for an Australian terrorist because they make good bait over-here and there is no lack haters on behalf of the bad examples that the government is setting on behalf of the Australian people. How low can you go Phillip Duddock? 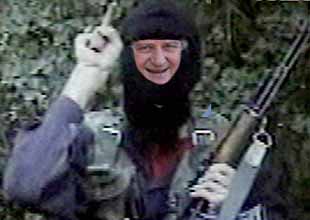 How low can you go Phillip Duddock?

Now are all the Aussies
are suspect terrorists?

But we've taken thousands of calls this morning from people who say that they regognise the voice behind the mask as Phillip Duddock.

Belinda Goodperson said she was sure it was him because she knows him personally and she regognised his voice.

Tony who's done some handiwork for Phillip Duddock also regognised that voice. "I'd know that voice anywhere", he said

The man is shown holding an automatic rifle and boasting about a recent attack that killed United States militants in Afghanistan.

But our callers say this is the sort of propaganda that Phillip Duddock gets up to when he's trying to sell us his terrorist plots and they all seem to fit the picture of the tale he's trying to tell us.

The video, aired on Australian/Dubai-based Al-Arabiya television, featured blurred footage said to be of a rocket attack on a helicopter that killed 16 US guerillas in June.

The masked man, wearing a black balaclava and combat gear, who our callers said sounded like Duddock, claims a group of Al Qaeda "fighters" carried out the operation.

Is Phillip Duddock the head of this terrorist cell?

"The Honourable Sons of Islam will not just let you kill our families in Palestine, Afghanistan, Kashmir and the Balkans, Indonesia, the Caucuses and elsewhere," the militant says in what seems to be Phillip Duddock's accent.

"It is time for us to be equals. As you kill us, you'll be killed. As you bomb us, you will be bombed."

The Community says that they'll GetUp! and Stand up for their rights and they will be looking very closely at Phillip Duddock's scare campaign

One caller who didn't want to be named said, "This is propaganda", she said.

But there is no official word on whether Duddock's terrorist cell is behind the footage but based on the history of the AFP and ASIO if you follow the links you might find a clue!

All the alleged terrorists are Muslims

We sick an' tired of-a your ism-skism game - Dyin' 'n' goin' to heaven in-a jesus' name, lord. We know when we understand: Almighty God is a living man. You can fool some people sometimes, But you can't fool all the people all the time. So now we see the light (what you gonna do? ), We gonna stand up for our rights! (yeah, yeah, yeah!).