My Granddad, Alfred Edkins from Kingstanding Birmingham, was a Prisoner Of War in Italy, during WWII. When Italy capitulated, he fled, hiding in all sorts of places. One day a farmer’s girl saw him in a field and ran away screaming. Her family later took him in, treating him like family.

This is a short film with animation following some of these amazing stories. 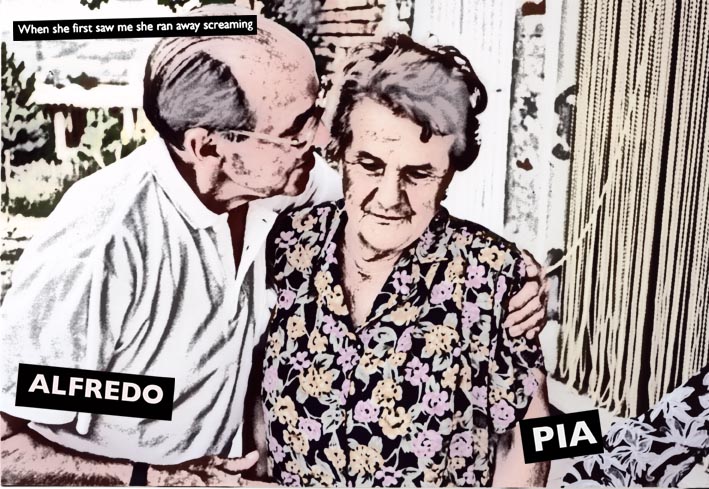 My Granddad, Alfred Edkins from Kingstanding Birmingham, was a Prisoner Of War in Italy, during WWII. When Italy capitulated, he fled, hiding in all sorts of places. One day a farmer’s girl saw him in a field and ran away screaming.

Her family later took him in, treating him like family, he worked with them on their farm, ate ‘polenta’, learnt the language, and even went to Church with them.

This was obviously very dangerous for the family as the Nazi’s were executing those supporting the allies. The Nazi’s were actively searching the village’s, including their farm/ house. My Granddad hid in the chimney of their oven one day, after it had been used earlier for baking bread etc.

One day he asked the mother of the young girl (Pia) , why she had run away, screaming, from him, & then be responsible for looking after him.

The mother took him up stairs and showed him a picture, that was hanging pride of place. It was of a young soldier who was a double of my Granddad, It was their son who had died fighting in Abysinia in 1933. She thought Granddad was the ghost of her brother!

When Nazi presence in the village/ & searching, got more frequent my Granddad left the farm & home, fearing for their (and his!) safety. He returned to the UK. He had no way of keeping in touch, and never knew how the family were.

Forty years later my granddad, my Granddad gave talks at my cousin’s school in Great Barr, by request of the History teacher, he told stories and answered questions in their History lessons. The teacher upon hearing the stories, went through archives/ records and tracked down Pia & family.

In 1994, my Granddad (along with my Nan, Mum & Dad) went back to visit Pia & the family at their home (Sant Angelo in Pontano). They kept in touch via letter & phone, (my Granddad remembers some of his Italian). She still called him My Love.

In September 2001, Pia suffered a coma, and later passed away.

My Granddad sadly passed away June this year 2005. We miss him deeply.

This film is dedicated to his memory and to Cipriani family who are one of the many unsung heroes of this war.