it has been 6 years since the martyredome of anthony james dawson and the silence remains by all who thought they once meant something to activism as they lay cozy in union jobs. all the deaf, dumb and blind and coopted media run by the sycophants of can west mediocrity, be it the mainstream facist press to the sellout alternia-rags sold out to arrogant bigots with tunnel vision, no imagination and with axes to grind, still hold no sense to know the question – what time is it? 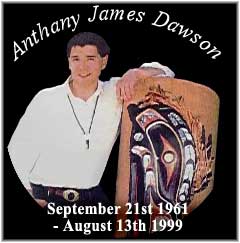 “so how do we save ourselves? we must first admit we are at war, admit
who our enemies are and act accordingly.” --junious ricardo stanton

"resistance is legitimate at all levels be it religious, intellectual
and so on,"—seyyad muqtada as sadr

in these times immersed in the absurdity of systemic acts of cruelty and
double standards in this messy area , some call the west , which is now
embedded in the midst of a treacherous performance piece -- it is only
logical that in an illogical world run by bullys, abusers, simpletons
and usurpers -- that frustrated valid bruthas will invoke acts of will
to power and make you feel the pain they feel.

it has been 6 years since the martyredome of anthony james dawson and
the silence remains by all who thought they once meant something to
activism as they lay cozy in union jobs. all the deaf, dumb and blind
and coopted media run by the sycophants of can west mediocrity, be it
the mainstream facist press to the sellout alternia-rags sold out to
arrogant bigots with tunnel vision, no imagination and with axes to
grind, still hold no sense to know the question – what time is it?

when gil scott heron checked the medium to the message he was saying it
would be of the mind, of the will to power in an movement of peoples
who, having grown into consciousness, hold no respect for the cult
lacking in personality who have usurped positions of privilege on the
left in order to parley them into a money scheme using peoples tragedies
to do so. that, instead, it would be done via the samizdat of urban,
rural and street logic. that the people, who are under represented ,
whose lives are devalued - whose lives are toyed with and told that they
don not mean anything - those flexes and spits and hollas whose
“intention is to disrupt the empire, to incapacitate it, to put pressure
on the cracks, to make it hard to carry out its bloody functioning
against the people” (w.u. prairie fire) will send communiqués out to
each other in an underground 411 –

…and so boom we get surprised at the sudden acts of spontaneous resistance.

random acts of revolution are the key to change be they controlling
your world via controlling resources --your world -- to creating your
own media to beating human breathes into boxes to flexes and sonics --
this is the revolutionary medicine to cure the sickness of eurocentrick
arrogance. this is what will confound the closed sets and minds of the
bakraw under qualified of the mainstream media-hypo - crity.

“if we want to obtain the man who produces knowledge, we must know what
others produce and not on the mere basis of being consumers. if we do
not learn about all that is produced by others, we can never reach our
aim. nonetheless, we should not simply receive others’ thoughts and fill
our minds blindly with it, ...following this logic, i have always
advised our youth not to let their aim be their success in their schools
and colleges, but rather to build the basis that enable them to be
creative.”—ayatollah fadlallah

let those of us who still think of Freedome Justice Equality remember
those hidden away in the ghettoes on faux multiculturalism, all for the
sake of maintaining the orthodoxy of egomaniacal supremacists, who are
the last generation of cavemen (fronting as the civilized) who will run
things on this planet – let us born the clearity in remembrance of
anthony james dawson and all those brushed under the door matt of
kkkanadian inactivity.

…and with that power of clearity -- no bombs are needed to destroy the
power centres stuffed with the dead men/unconscious cave men and women
set on pimping their glossy propaganda as reality.

"hear me: an unconscious people, an indoctrinated people, a people fed
only partisan information and opinion that confirm their own bias, a
people made morbidly obese in mind and spirit by the junk food of
propaganda is less inclined to put up a fight, ask questions and be
skeptical. and just as a democracy can die of too many lies, that kind
of orthodoxy can kill us, too." --bill moyers -- "Media Reform in St. Louis, Missouri, May 15, 2005"

perhaps this has become a war/a battle for our self esteem—a collective
esteem held in our hearts that everyday is a struggle to maintain a
principle in the purity of lost lives in everyland which holds a truth.
The truth is still with those who have experienced the taunting, the
violence, the disrespect, the rapes, the harassment, the murders -- the
lies and manipulations. Those who have fallen and have had
compadres/conferes/comrades/bruhs and homies lost to the callousness of
the system and to the sociopaths what serve it and it’s ministry of
social engineering who will try and beat us all down into an
unconsciousness of passivity, of comformity and mental death.

What of death? is it the blessing? What of it? What of it if comes when
you least expect it and were in a condition of forgetfulness because
breathing clay is very forgetful? What if it becomes a mental state?
This is unforgivable and requires war—mental warfare -- Some griots say
they are ‘ready2die’ b.u.t. death or martyrDOME should be a moment of
clearity

“go and work as hard as you can,” he said to thunderous applause. “wake
up howard university, udc (university of the district of columbia) and
the black students of georgetown (university). go to the hustler,
prostitute and pimp. tell them we’ve come to untie you. the master has
need of a pimp, gangbanger and a young brain warrior. i’m counting on
you....“the umbrella of the nation of islam will always be there for our
brothers and sisters who struggle for the liberation of our people.”--
nisa islam muhammad – on hon mins farrakhan’s youth address “who cares
for the young and the masses?”

this is for the valid bruthas who are martyred for the “cause of justice
and light". we can only hope that their will and resistance will
continue our culture and not only be overstood b.u.t. heard, felt and
transformed to make change to this campaign of oppression and abuse of
power.