ONE YEAR ON - JUSTICE FOR TJ - RE-OPEN THE INQUEST

The Inquest itself was also flawed as legitimate evidence and witnesses were blocked by the legal team purportedly representing the Hickey Family and by the Counsel assisting the Coroner. The Coroner had also set strict parameters for what could be discussed in open Court. 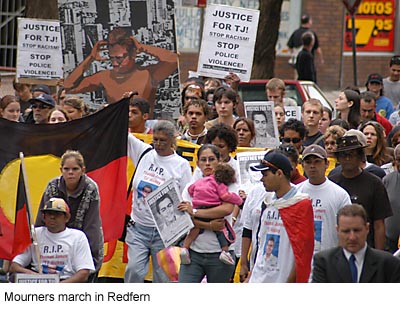 AUSTRALIA: NSW: The Indigenous Social Justice Association Inc has organised a Rally and March on Wednesday 17th August 2005 on behalf of Gail Hickey, her Family and supporters.

We will rally at the Block, Redfern, at 11:30 am and then march to the Glebe State Coroners Court before returning to the Block for a community BBQ.

On the 17th August 2004 the NSW State Coroner, John Abernethy, handed down his Finding arising from the T.J. Hickey's Death in Custody Inquest.

The Finding was fatally flawed as it was based on the acceptance of a corrupt NSW Police Brief of investigation.

The Inquest itself was also flawed as legitimate evidence and witnesses were blocked by the legal team purportedly representing the Hickey Family and by the Counsel assisting the Coroner. The Coroner had also set strict parameters for what could be discussed in open Court.

We have also asked the new NSW Premier Morris Iemma and his new Aboriginal Affairs Minister, Milton Orkopoulos, to meet with ISJA and the Hickey Family to discuss our concerns with the original Inquest. With the moving on of Bob Carr we expect that any intransigence such as that shown by him will no longer be present.

The NSW State Coroner must be advised that the Inquest is to be reopened or a new inquest be held in the interests of justice in order to allow True Justice to finally occur.

We strongly believe that (now Senior) Constable Michael Hollingsworth had far greater involvement in the tragic death of TJ and he must now take the stand and give his evidence despite the comments of the State Coroner that he cannot be trusted to tell the true facts of his part in the tragedy of that day.

Justice for the Hickey Family - Re-open the Inquest.

"We will have no peace until the truth comes out", Thomas "TJ" Hickey's Aunt Gail told a rally in Redfern on February 13. The protest, attended by more than 200 people, marked the first anniversary of TJ's death.

About 350 people carrying banners, placards and flowers marched in the inner Sydney suburb of Redfern yesterday in remembrance of Thomas "TJ" Hickey, the 17-year-old Aboriginal boy who died on February 15 after he came off his bicycle at high speed and was impaled on a metal fence.

The roundup this week - dodgy riot gear, shooting French photographers, senior coppers being 4 times over the legal limit, dodgy promotions in NSW, more terrorism powers in WA and drug-dealing coppers in Melbourne (it is alleged).

The August 7 Sunday Telegraph reports that NSW police is facing an $800,000 fine for not providing proper riot gear for police during the riot last year in Redfern. The riot took place after the death of a local Koori boy, TJ Hickey, while being followed by police.

Assaulted, intimidated or harassed in custody?