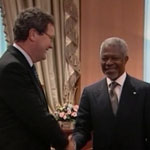 downer should
be serving life
for conspiracy
over the Bali
bombings

AUSTRALIA/INDONESIA: The community will raise concerns with foreign minister alexanda downer about his propaganda claims in relation to Muslim teacher and preacher Abu Bakar Bashir, who was set-up by the Indonesian government on behalf of the US and Australian governments.

downer, a low life propagandist would like to blame anyone he can for the Coalition of the Killing and his governments illegal and degrading war on Iraq and Afghanistan.

The Bali bombings, which ignited overwhelming support for those wars, Iraq in particular. A war that prompted peasants in Indonesia to take up the offer from a government agency unknown to the criminals who were themselves set up to carry it out.

downer should be serving life in prison but failed to be taken to the Hague War Crimes Court to be tried along-side john hoWARd and his war criminal mates.

The Bali bombings, in which 88 Australians were killed was the threat Australia needed in the region to get support for the war and if a foreign government was behind that Australia needs to get to the real truth instead of filibustering around the Coalition of the Killing and downer's propaganda conspiracy theory.

Bashir is now serving a 30-month sentence for allegedly having a connection with the Bali bombings, but as his statement taken by police attested that was simply not the case at all.

Why not celebrate independence with the truth?

Reports today say his jail term could be reduced by five months as part of an amnesty to celebrate Indonesia's independence day on Wednesday.

The community is urging the federal opposition to discuss the illegal and degrading war on Iraq and Afghanistan with the hoWARd government.

The war propaganda also relates to george w bushit and tony the bliar.

The Community says Australia will oppose any move to stop the hoWARd government including downer being tried for their war crimes against humanity.

We wouldn't want to see them walk free without being tried by the International Criminal Court and we will be taking this matter up with UN Secretary-General Mr Kofi Annan.

So we'll get a report back from him in time.

But our opposition should also be talking with the Indonesian Attorney-General and the Justice Minister about this."

The Bali bombings killed 202 people, George Dubya Bushite, Tony Blair and John Howard killed 100,202 people including the Bali bombing and the rest... to nail Saddam Insane and the preacher and teacher Abu Bakar Bashir, believe it or not!