All Australians deserve a fair trial

David Hicks could be facing a U.S military commission in a matter of weeks. We must act now. Sign our letter demanding that Alexander Downer get David Hicks back here to face an Australian court: 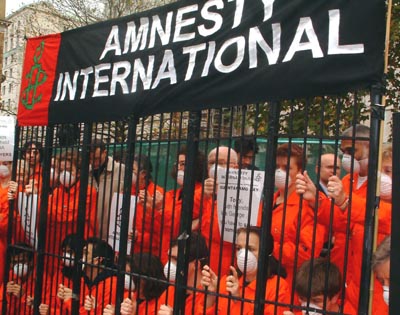 So now you see the light, eh! Stand up for your rights. come on!

AUSTRALIA/CUBA: David Hicks will not receive a fair trial in Guantanamo Bay . We must demand that Foreign Minister Alexander Downer get David Hicks back here to face an Australian court:

The British, Spanish, French and German Governments have all refused to allow their citizens to be tried in Guantanamo Bay. Foreign Minister Alexander Downer should have the guts to stand up to the Bush Administration and do the same.

Even the Americans have removed their citizens from Guantanamo Bay and ensured they get a fair trial at home.

Three senior US military prosecutors have already quit the military commission process in Guantanamo Bay, claiming it is unfair. Anyone who commits a terrorist offence should stand trial. However that trial must not be unfair, because unfair trials weaken our democracy and the rule of law.

David Hicks could be facing a U.S military commission in a matter of weeks. We must act now. Sign our letter demanding that Alexander Downer get David Hicks back here to face an Australian court:

Jeremy, David and the GetUp Team

Hypocrisy, an overarching war mentality and a disregard for basic human rights principles and international legal obligations continue to mark the USA's "war on terror". Serious human rights violations are the inevitable result.

The detention camp at the US Naval Base in Guantánamo Bay in Cuba has become a symbol of the US administration's refusal to put human rights and the rule of law at the heart of its response to the atrocities of 11 September 2001. Hundreds of people of around 35 different nationalities remain held in effect in a legal black hole, many without access to any court, legal counsel or family visits.

HICKS: Not a Happy Birthday!

These deficiencies are peculiar to the US Miliary Commission, as proceedings brought before International Tribunals, US, British & Australian criminal jurisdictions & Military Courts Martials ensure that the rights of a defendant to a fair trial are protected.

Thanks for being there at the beginning of a new movement to build a more progressive Australia!

hoWARd man, don't tell me, Heaven is under the earth. I know you don't know, What life is really worth. It's not all that glitters is gold; 'alf the story has never been told:

So now you see the light, eh! Stand up for your rights. come on!