Is your union funding New Labour?

The war in Iraq, ID cards and the removal of our civil liberties through the 2005 Prevention of Terrorism Act are just a few of the things that this Labour government have forced on us all recently. Now how would you feel if you found out you had been funding Labour during the war and still are now as ever more oppressive legislation is brought in to force? Well if you are a member of one of the big Trade Unions, affiliated to the TUC, then it's likely that's just what you have been doing. Unions have given somthing like 24 million pounds to the party since 2002 . 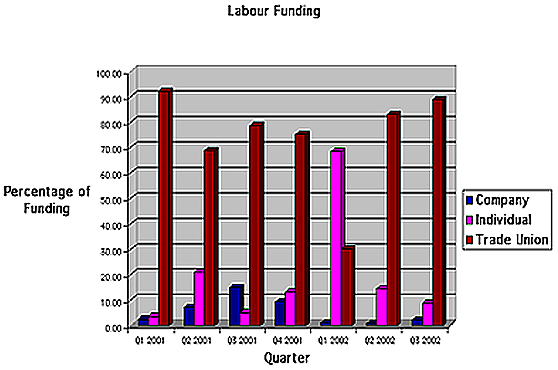 Each of the big Unions has what is called a Political Fund. This is a fund which they use to finance MP's and other political groups to supposedly further the collective interests of the unions membership. Every union member contributes towards the fund by means of a 'political levy' which is often hidden within the normal union subscription each member pays.


A unions political fund is financed in one of two ways. Firstly, and usually the main way, is by including the political levy as a part of the normal union subs, with an option to allow people to 'contract out' of paying it; Secondly by means of a separate political levy from members not already 'contracted out'. Although it's only a small sum for each union member when you add up the millions of Trade Union members paying the levy the full extent of the huge amounts of our money being used by Union bureaucrats to curry favour with the Labour Party becomes clear.

If you want to put an end to your money funding this Labour government there is now a straight forward, easy way to opt out of the political levy. There are simple instructions and a model Exemption Notice which you can use at the bottom of the page. For now though let's take a look at just how much of our money is being used to fund Labour.

The Labour Party is in dire financial straits. In 2002 it was overdrawn by 5 million pounds in addition to a 5.5 million pound mortgage on its new headquarters in Westminster. Party membership has fallen from an all time high of 407,000 at the time of the 1997 General Election to just above 200,000 now, the lowest membership total since the 1930's, with the remaining members looking at a £5.00 hike in membership fees soon. Despite the publicity surrounding the donations by big business and rich individuals, and regardless of the Fire Brigade Union (FBU) disaffiliating from Labour and the Rail, Maritime and Transport union (RMT) removing some funding elsewhere, the Unions are by far still the largest contributor to Labours finances.

So how much are you and other Trade Union members adding to the New Labour coffers via the Political Fund? Take a look for yourself at the top 30 contributors to their funds since 2002:

By all accounts it looks likely that the Labour Party will remain in government until at least 2009, and will continue to ignore the general will of the people, will continue to send young working class people to war, and will carry on attacking our basic civil liberties with increasingly authoritarian laws. While you may not be able to vote Blair and his cronies out you can refuse to fund them any more. So how can you contract out of the political levy and stop funding the Labour Party and this government? The answer is much easier than you might imagine.

Part 1 of the Trade Union and Labour Relations (Consolidation) Act 1992 allows every Trade Union member to opt out of paying the levy towards their union Political Fund. In order to become exempt you need to complete a Political Fund Exemption Notice and post it to your union. If you pay your union subs direct from your wages then you need to send the form to your wages or payroll department along with a copy to your union headquarters. If you pay your union subs direct to the union then just send the completed form to your Trade Union headquarters using the address on your membership card. The important thing is that the union receives your exemption notice in writing and that it contains the following statement:

"I give notice that I object to contributing to the Political Fund of the Union, and am in consequence exempt, in the manner provided for by Chapter VI of Part 1 of the Trade Union and Labour Relations (Consolidation) Act 1992, from contributing to that fund."

You also need to name your Union, give your name and address, your union membership number, and date and sign it.

All you then need to do is fill in your personal details and post it off.