Say no to Indonesia as a tourist destination

But perhaps people want to take drugs when they go out and just because it is not a 'legal drug' doesn't mean it's not useful or even more useful. So I guess now the Australian authorities will insist that this is what can happen in Australia somewhere down the track and more likely to be being promoted for that very reason by propagandists here? 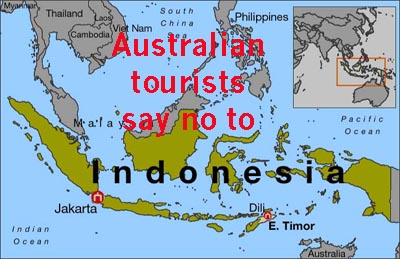 No holiday and not cheap!

Then why would you go?

But this is just nonsense and could only bee seen as propaganda by the Australian and Indonesian Authorities. In short by the powers that be dictating to all Australians!

"We tried to use educative and preventive efforts," he said. "So, after doing that, and the people still use drugs, since we have laws to uphold then we have to take action like launching raids, arrests."

His men would now force clubbers to undergo urine tests, Colonel Sugiarto said. "We cannot go to every party but we go in at random and based on priorities."

But perhaps people want to take drugs when they go out and just because it is not a 'legal drug' doesn't mean it's not useful or even more useful. So I guess now the Australian authorities will insist that this is what can happen in Australia somewhere down the track and more likely to be being promoted for that very reason by propagandists here?

Sydney model Michelle Leslie, 24, faces up to 15 years in jail after being caught with two ecstasy tablets in her bag as she entered a party at Kuta's GWK Park last weekend.

After visiting her in prison yesterday, her new lawyer, Basuki Prawirodipuro, was confident but had not studied the case in detail.

He is one of a team of five Indonesian lawyers who specialise in drug cases. He was hired by Leslie's family following Friday's sacking or resignation of her former lawyer, Muhammad Rifan.

At the Denpasar police cells, where Leslie is still being questioned, a friend yesterday said she was in good spirits.

Leslie would be fully prosecuted, Colonel Sugiarto said. "It is again a lesson for our tourists .... she regrets it, but it is too late, it happened already."

Australia's ambassador to Indonesia, David Ritchie refused to comment on the urine test plans, but emphasised that no Australian should take drugs in Indonesia.

Although Australians were not being specifically targeted, they risked being arrested and could face the death penalty for the possession of small amounts of recreational drugs, he said.

Oh, we certainly know that by now and I doubt whether Australian's will be planing to go partying or for that matter anything else in Indonesia unless they just want the death penalty or to get locked up for 15 years?

Turn your back on Indonesia as a tourist destination that will teach them a lesson! Or else give them a mechanism to criminalise anyone they want and that's certainly no holiday!

For instance, even in Afghanistan, the presence of thousands of American and Nato troops has not halted the growing of the poppy and the subsequent production of heroin. In fact, it appears that the 'war on drugs' is probably even less winnable than the 'war on terror', both of which are being prosecuted in that same country.

An unidentified AFP agent is said to have acted in close liason with the Kopassus Kops who can't wait to hang a few poor white Aussie trash punks with all the full help of John Howards Salvation Army AFP.

The security-camera images are from the check-in hall, where in October, Corby, 28,took the flight to Bali that led to her drug conviction. The article goes on to say that; Qantas said that it offered her legal team a chance to see the images in December but had no reply.

It was me! 'New Corby trial'

Just then a woman jumped up onto the table and said, "It was me, I did it, can you please give me the death penalty, because I hate living," she said.

THE DRUG-RIDDEN STREETS OF BALI:

While Schapelle Corby sweats it out in a Bali jail, other Aussies were left wondering if they could be targeted by Indonesian authorities keen to make an example of foreigners

PLANNING TO TRAVEL OVERSEAS? BEFORE YOU GO, READ THIS!

Be prepared to share your cell with a bucket, at least a dozen cockroaches, some lice and a few rats. You will need to become accustomed to the aroma from the bucket (your toilet). If you conform, prison officials will reward you with a lid for your bucket. If you refuse to conform, you may be legally flogged.

Hello, my name is Martin Garnett. I'm an Australian serving a 26 year and 9 month prison sentence in Thailand for drug trafficking. I'm held under the name of Mitchell Ian Blake and I've been here since 1993.

According to an Australian Medical Association report, 83% of prisoners behind bars are there as a result of drug-related offences. In a NSW study it showed the frequent amount of burglaries depended on the rate of spending money on drugs. Neil Comrie, Victorian Poice estimates 70% of all criminal activity is drug related. Inadequate treatment services as well as treatment of drug addiction as a crime, rather than a health issue has criminalised a huge number of people.