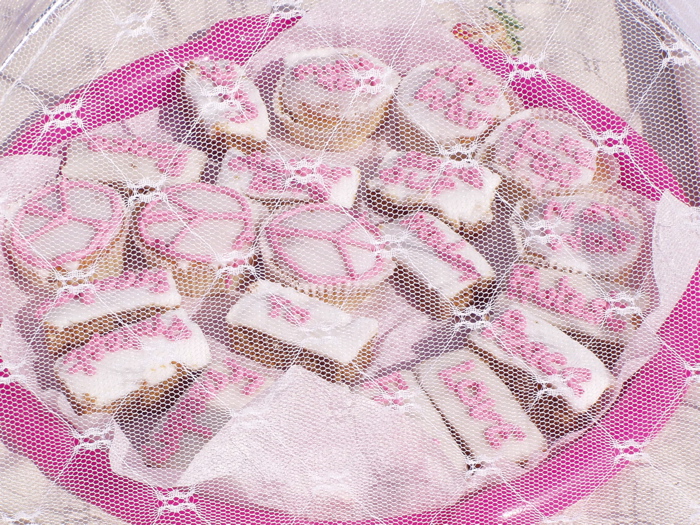 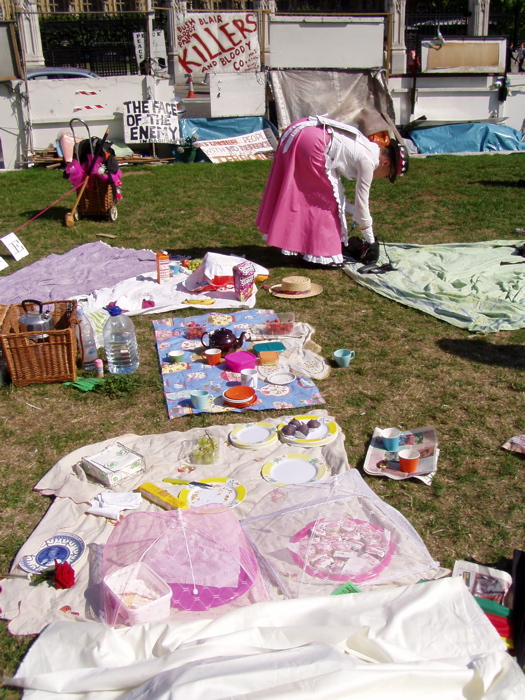 a lovely day for a picnic 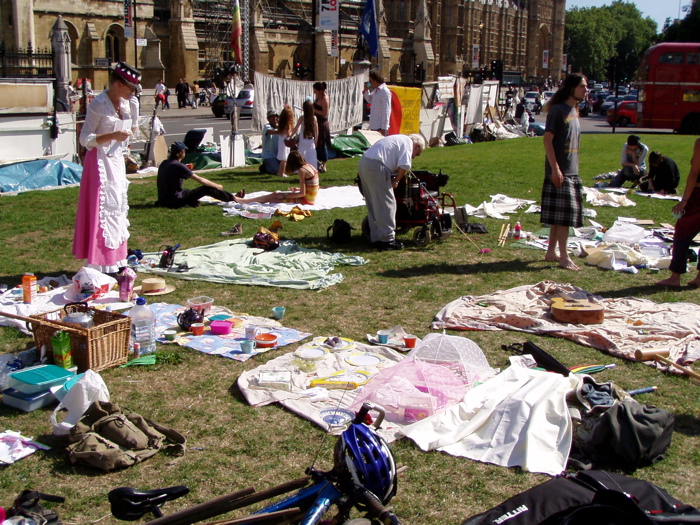 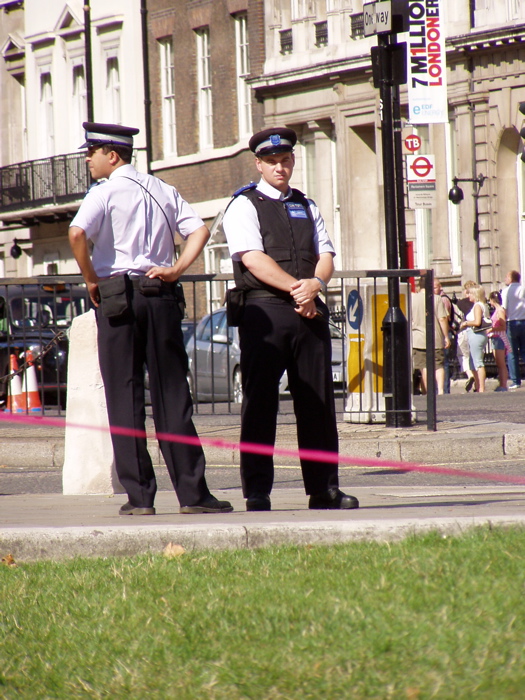 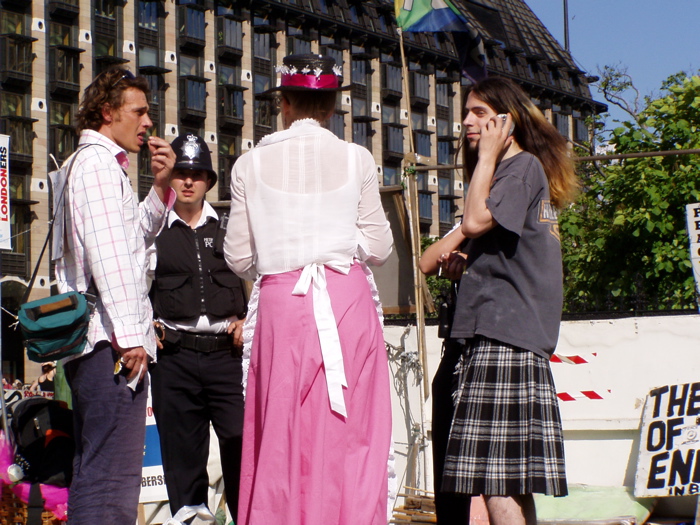 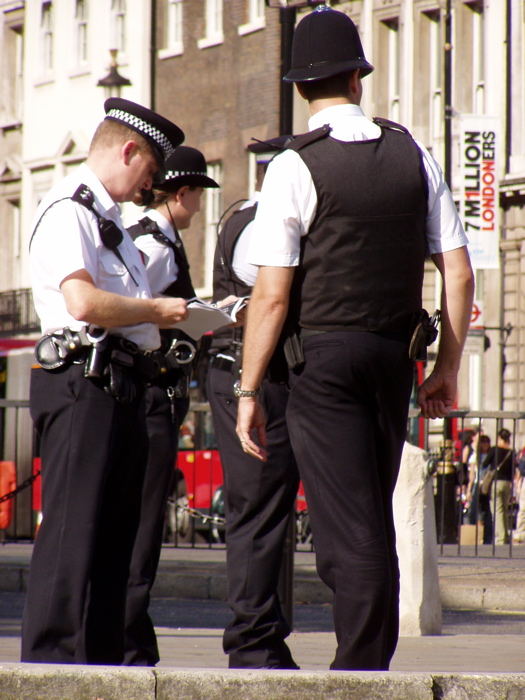 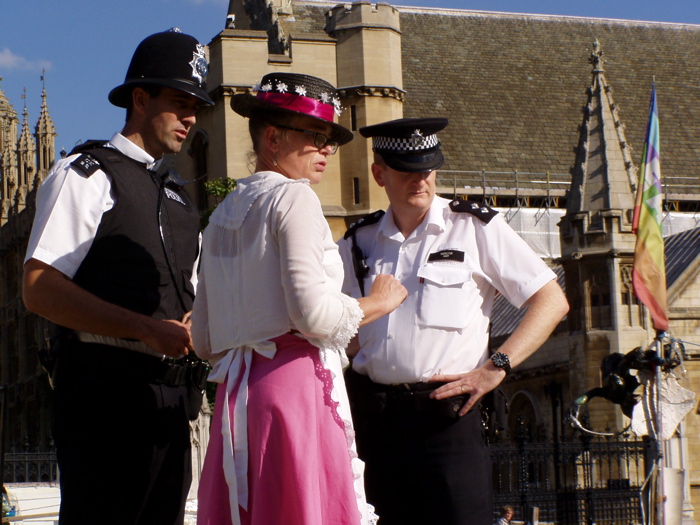 inspector hart and his henchman 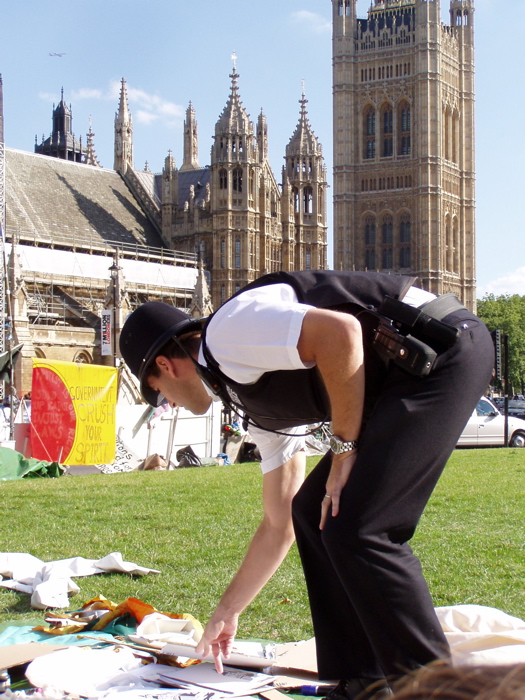 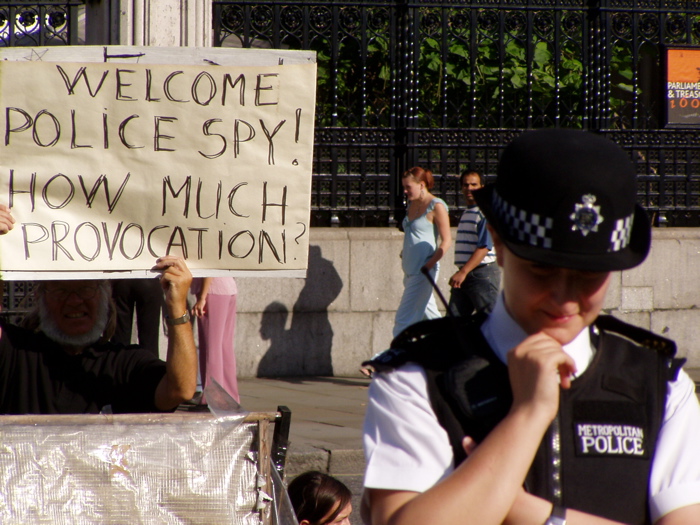 meanwhile the only actual protester gets ignored 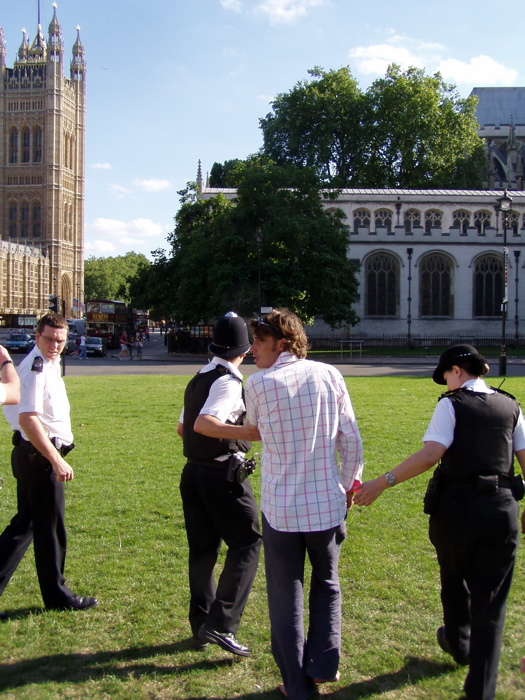 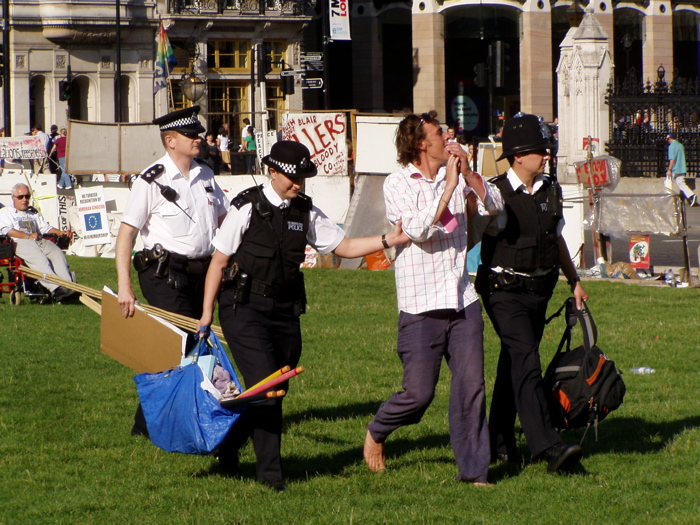 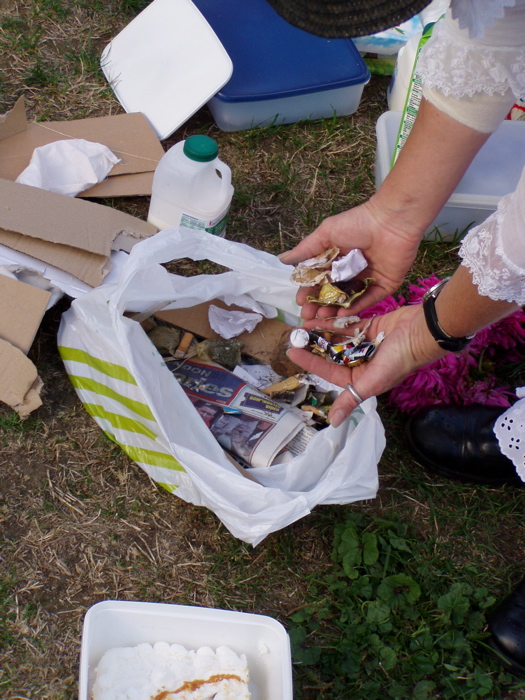 all litter was removed

this afternoon a group of picnickers got together on parliament square behind brian haw's placards to convene a small 'people's parliament, to share lunch, tea, biscuits and cakes, to play croquet, and to hold a banner-making workshop to prepare for future anti-war and other issue demonstrations.

at no point did any of the group demonstrate, and no loud-hailers were used. the banners were being made for future use, and no-one was holding them up or protesting in any visible way.

after a couple of hours of enjoyment in the glorious sunshine a couple of concerned community support officers stopped by to investigate what heinous crimes were being committed. unable to deal with the dangerous situation themselves, they were soon on their radios asking for police back-up. the picnic people offered them tea while they waited, but they declined.

after a while, a male and a female police officer turned up. they were asking whether there was a protest going on, and they were re-assured that there wasn't. however, confused by the situation, they radioed for back-up. they were also offered tea, but declined.

after a further wait, more senior police turned up, and began to try and collect evidence that dangerous crimes were being committed. unable to decide for themselves, they radioed for back-up.

finally police inspector hart himself turned up. he took a good look at the situation with his henchman, and he then reached the conclusion that this was not a picnic, but was a demonstration. the peaceful picnickers were aghast, and tried to explain to him that they were simply making banners for future use, and none had been held up in anger, or in order to persuade the public or parliament to change their views (surely the sign or very point of a protest). however inspector hart was having none of it, and he decided that the person who had been doing most of the talking must be some sort of ringleader and therefore a dangerous protester liable for arrest. meanwhile, some other guy who had been sitting for some of the afternoon on a deck-chair near brian stood up with a strange placard about police spies, and started wandering around shouting slogans. somehow even the eagle-eyed inspector completely missed the man's shouts and banner waving while carting the 'organiser' off to the police van and to west end central station.

having done their dirty deed, the police went away leaving the rest of the picnickers to tidy up (or carry on banner making it seemed!) and leave.

ok, i've been a bit flippant here, but this really is quite serious! think about it - what the hell's going on? in the situation of most crimes, police have the power of discretion as to whether it's worth arresting someone. this is based on the grounds of how serious a crime is being committed, whether there's a public nuisance element, whether the culprit is likely to re-offend, and whether it's worth all the paperwork.

what was interesting and intriguing about this afternoon is that there is clearly an instruction to police to refer protest up the command line, and indeed all the way to inspector. so this inspector had to give up nearly an hour of his time on a sunday afternoon (while the notting hill carnival is going on and while london is apparently under siege from terrorists) in order to decide whether a picnic might be deemed a protest.

the whole operation was on very dubious ground, not least because one officer was seen going through the bags of one of the picnickers and removing protest material in order to use it as evidence against the entirely different person that they arrested. also, at the very moment they were taking the arrestee to the van, the 'police spy' banner man was clearly shouting, holding his banner up and moving around breaking the law, and yet he wasn't arrested. previously, police had been seen looking at a pamphlet of mugshots, and so were clearly targeting people in an evidentially unsound and totally unjust way.

we knew this law was political, but this afternoon showed that in action so clearly.

the 'parliament square eleven' (arrested on two previous protests as opposed to picnics) will appear at bow street court on tuesday morning.

further information is available at www.parliamentprotest.org.uk
and the picnics will continue from twelve noon every sunday with more info and a people's website at www1.atwiki.com/picnic/