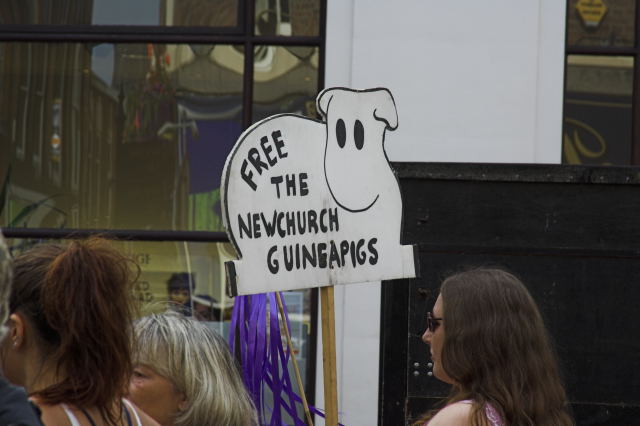 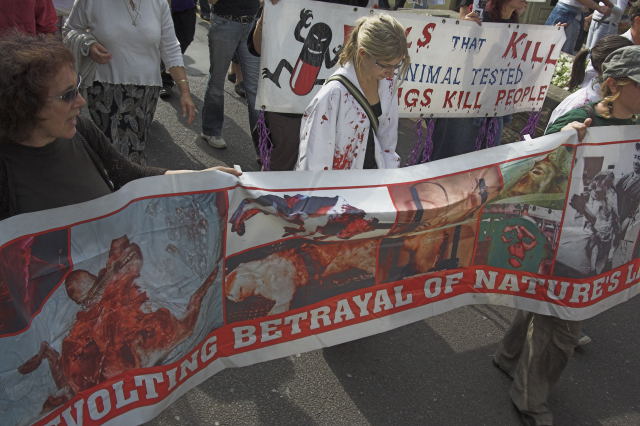 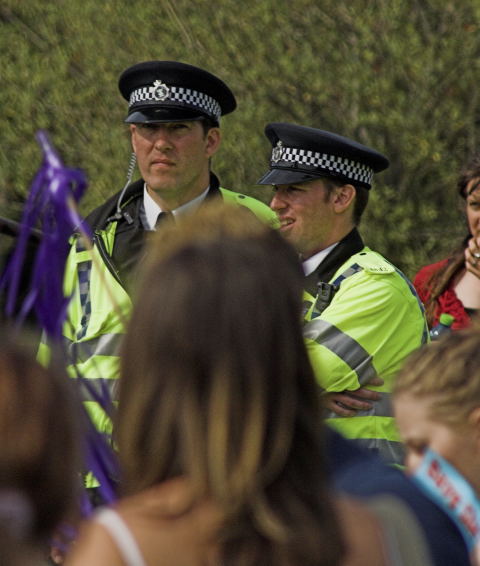 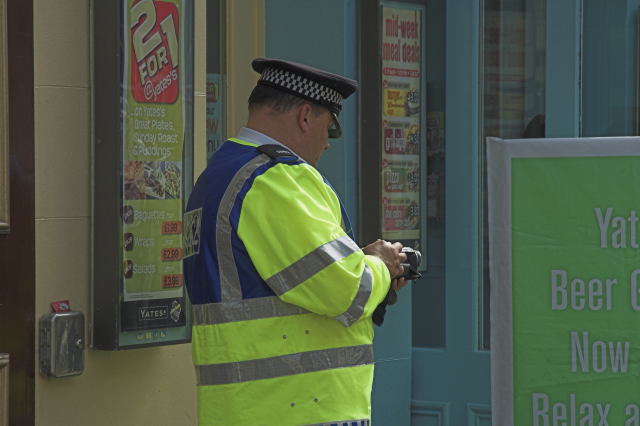 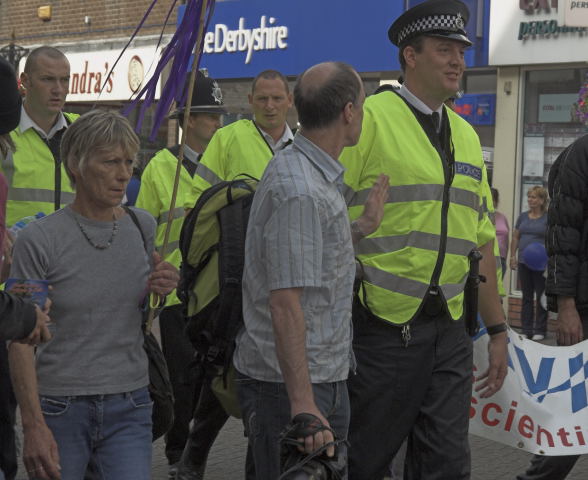 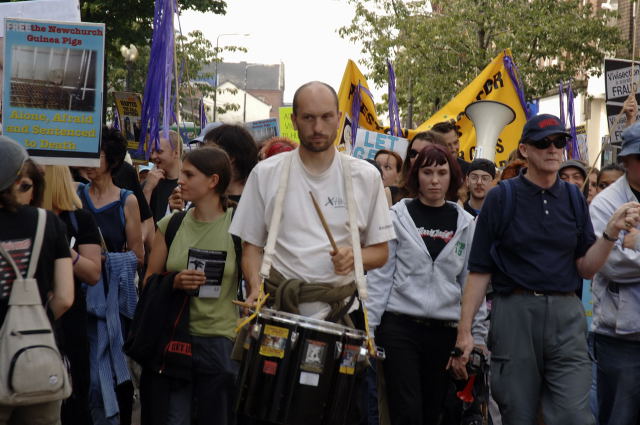 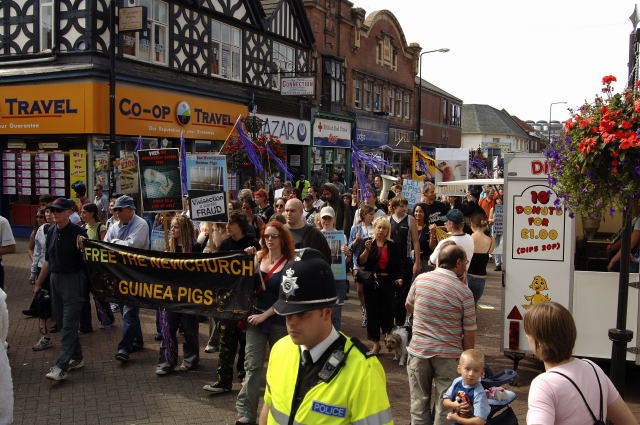 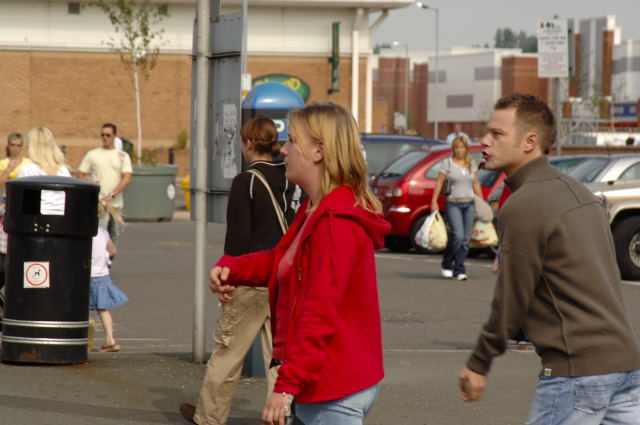 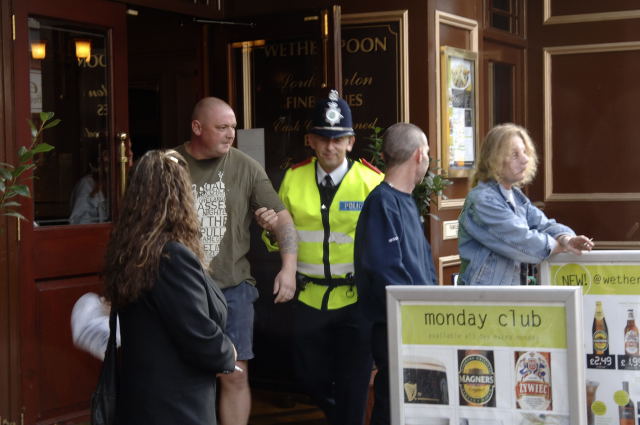 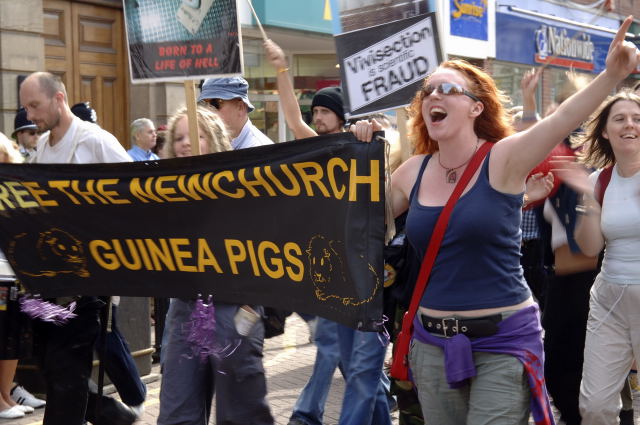 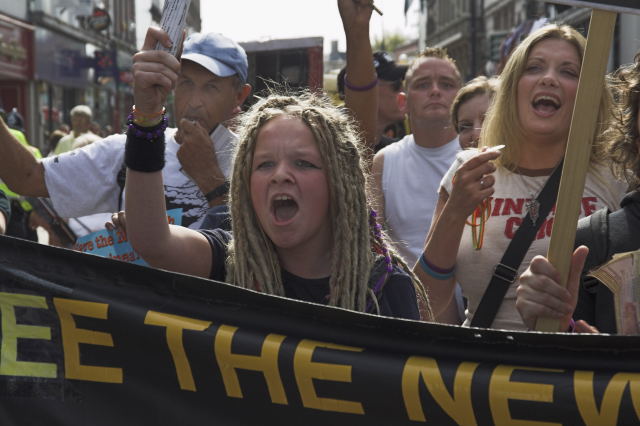 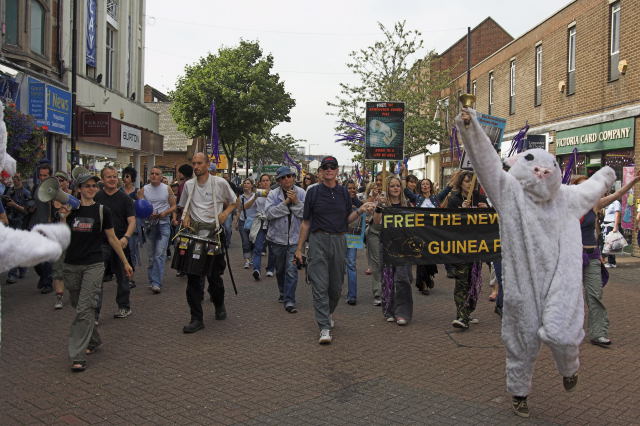 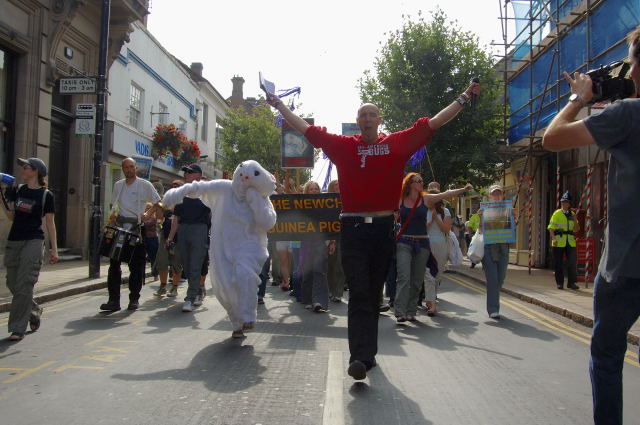 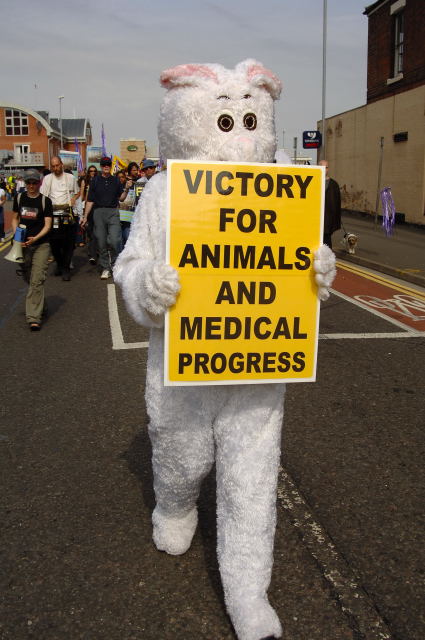 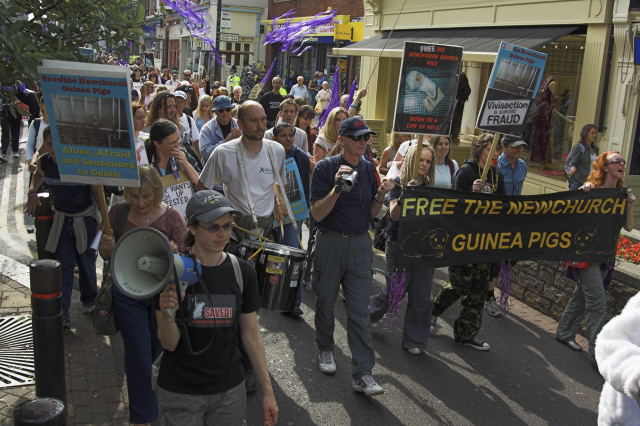 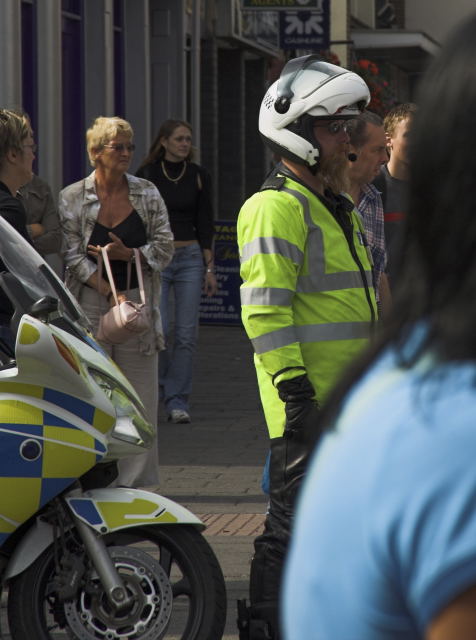 hells angel still on the case 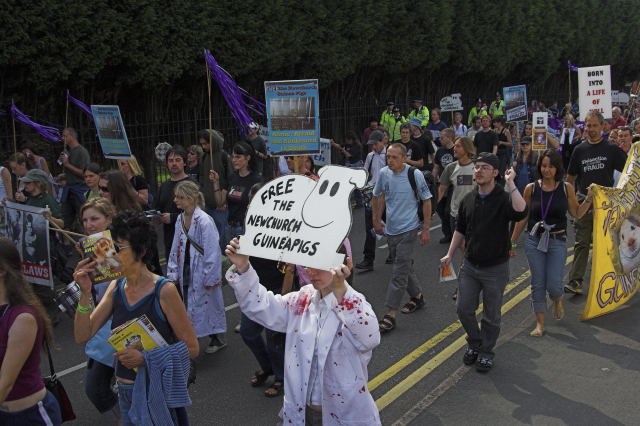 Staffordshire police force had already imposed a section 14, upon the protest rally and was busy handing out copies of these to people turning up for the march. Not that any one was bothered mind; as today was a different kind of march for the animal rights movement, this was a victory march, as the Halls, the owners of the guinea pig breeding farm at Newchurch had announced that they were closing the business down and would no longer be supplying the vivisection industry, as a result of actions from the animal rights movement and a disproving general public.

The first request of the day for many was mingling around the stalls and buying new t-shirts saying SAVED Newchurch Guineepigs and people were updating their wardrobes and getting good food and chilling out. After an hour and a half of chatting and meeting up with old friends an estimated 200 people had arrived to here from a host of speakers in the movement, who sadly, could not speak, as they were banned from entering the UK or otherwise detained! So a speaker from the campaign was forced to read out letters, which resulted in their message “still” getting out to the masses and the crowed that had gathered attentively to hear what had to be said; cheered jubilantly and loudly in a buoyant mood that was to last through out the day, regardless of what the police did or the authorities imposed, showing that the animal rights movement will not just lie down and take it, and that they can dish it out just the same.

The march started of a little after 2 o’clock and was silent in its nature for the first half, out of a mark of respect to all those animals that have died needlessly. This was accompanied by a lone drummer, who marked out the beat of the slow march in a haunting manner. At a designated point the march burst in to a loud screams of triumph, cheer and victory that had no sound of dying or fading for the rest of the march that filled the streets of Burton on Trent in an exhilarating manner. People were dancing down the streets and waving their arms in a salute of victory despite the taunting of a couple of individuals that were not part of the procession and looked like they were trying to cause trouble for the march, but the marchers were having none of it today, as today was their day!

Despite the jubilant mood, the police had to show their prejudices against the animal rights movement by arresting a 13 year old girl for handing out leaflets (yes, handing out leaflets, a highly criminal act these days!). Apparently two or three others were arrested when they tried to plead with the police to show some logic and reason for their actions, while the young girl was being arrested.

Throughout the day I spoke to some individuals from a variety of campaign groups and asked them for their view on the announcement of the Halls closing their doors for the last time at the farm from hell.
Although the Halls are quitting, they still have guinea pigs in the farm and SNGP are still applying pressure to get the guinea pigs to good homes and not to the labs that the halls are hoping for, despite their claims of concern over animal welfare, another from the same campaign said in addition to seeing through the closure of Newchurch we are hopping to give support to other established campaigns like SHAC and stopping any university from experimenting on primates. When I asked if it was worth the struggle they all replied along the same lines of “absolutely, it is well worth the struggle to stop animal torture, but no one here can begin to understand what this (victory day) means here, we are not stupid, we are equal to all those campaigns against slavery, against racism and all the rest, they are all valid, all need fighting for”.

The policing has been awful, the wrongful arrest rate has been through the roof, Police Officer Rushden one day drove down from the house and stopped to wind down his window and said “you will never close us down” how biased is that, he even began to think he was working for the Halls, (some swear he was) and we appreciate how awful they have been and so do the ALF, they haven’t been able to catch anyone.
Despite all the laws they tweaked and have brought in they still can’t stop us and won’t, we get stronger and more powerful when we become vulnerable as our tactics change and we try even harder to close them down because we know we are a threat and are having an impact on the businesses who try to profit from animal torture.
The battle continues though as it was noted that police intelligence gathering officers from Oxford and Cambridge were there armed with video cameras, but hey we won this one so let’s do the rest.