Asbestos cancer: Are children up to 1000 times more at risk with HSE’s "acceptable" exposure levels?

Campaigners say an article just published by a national expert on health and safety has significance for the controversial Spodden Valley planning application. 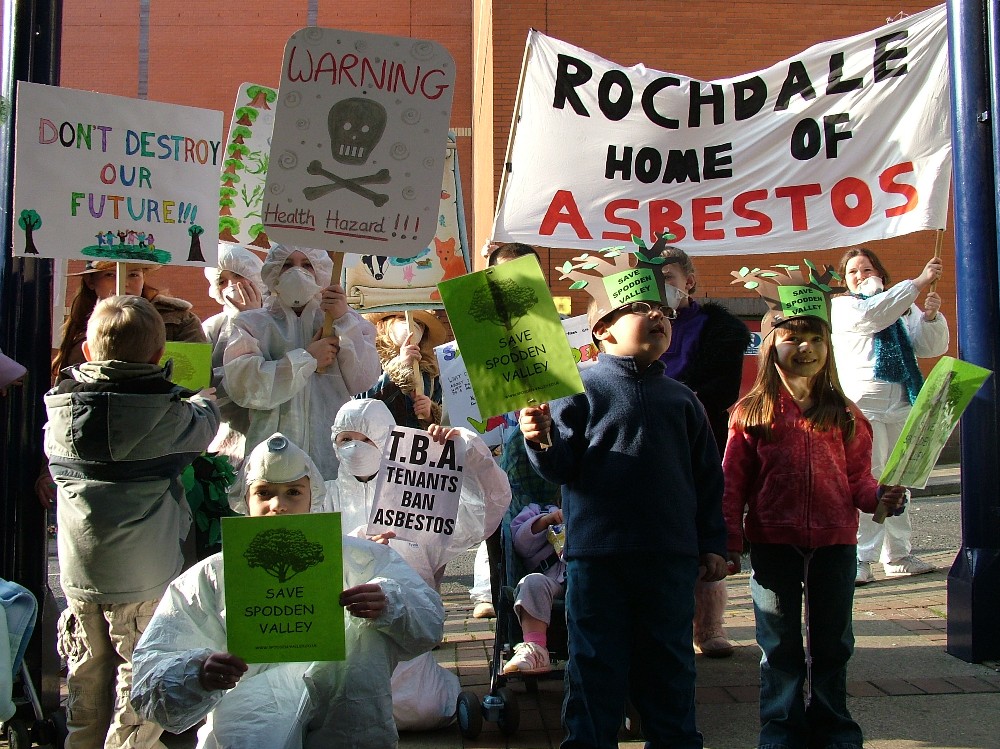 Protesting for a safe future...

In December 2004 a building consortium of Countryside Properties, MMC Developments and Rathbone Jersey submitted plans for over 600 homes and a children’s nursery for the 72 acre site that once housed the world’s largest asbestos textile factory.

Edinburgh-based occupational hygienist Robin Howie, writing in the Environment section of Health and Safety at Work magazine has concluded that very low level exposure to asbestos dust could carry significantly more risks than has been previously calculated.

Mr Howie’s calculations are based on 3 factors already accepted by health and safety experts, these are:- the type of asbestos, the amount of time per day exposed and the age at which asbestos exposure occurs.

A shocking example given in the article suggests that pre-school age children exposed to a ‘legally’ permitted level of blue asbestos (0.01 f/ml.yr) could be 1000 times more at risk of the terminal cancer mesothelioma than is deemed acceptable by the Health and Safety Executive (HSE).

The Greater Manchester Hazards Centre (GMHC) has reviewed the article and believes it has profound implications for the proposed planning application in the Spodden Valley for over 600 homes and children’s nursery.

The Manchester based not-for-profit organisation suggests that current legal thresholds for asbestos contamination in soil and building rubble that could still pose a significant health risk.

“Mr Howie’s article confirms the need to analyse soil for extremely low levels of asbestos and then to ensure that any action does not reach levels that risk contaminating homes and schools”.

“current ‘acceptable’ exposure levels for occupational exposure may not protect children exposed to those same asbestos levels at home, nursery and school. Mr Howie’s paper must be the start of an important debate.

These views are supported by Jason Addy, co-ordinator of the Save Spodden Valley campaign:

“After reading Mr Howie’s article it appears that the currently accepted legal threshold levels may pose a serious health threat to the people of Rochdale for decades to come.”

“It goes against common sense to accept that current asbestos standards may expose the public to risks beyond the Health and Safety Executive’s acceptable level.”

“This town has suffered too much for far too long because of asbestos. Every sane person agrees there must be a permanent solution to the contamination issues of the Spodden Valley site. We welcome the fact that nationally respected experts are investigating methods and scientific calculations that could save lives”.


Mr Howie has met members of the Save Spodden Valley campaign and is producing a draft paper that specifically considers the contamination issues facing the former asbestos factory site and surrounding area. All papers are to be presented to those with interests and responsibilities for the 72 acre site. These include the HSE, Environment Agency, Rochdale Primary Care Trust, Rochdale Council and the office of Deputy Prime Minister.

Rochdale MP Paul Rowen has been keeping a keen eye on recent developments. He is in correspondence with government ministers and the Health and Safety Executive following the adjournment debate he called in Parliament this June. The upcoming Westminster term is expected to be very busy for the Spodden Valley Campaign as the controversial planning application remains high on the Parliamentary Asbestos Subcommittee’s agenda.

The Spodden Valley has also been the focus of attention for UK Construction magazine- a widely read publication for 30,000 subscribers involved in civil engineering, planning and local government.

“As our magazine article says, given the history of the site and its significance as once being the world’s largest asbestos textile factory, this may be one of the most controversial brownfield developments this country has seen. We will certainly be publishing further articles about this in the future”.