"All my towels - they was used up," Mr. Thomas said. "I was hoping to get some towels to get a bath with." Another man acknowledged that he had stolen a car and protested that government officials had encouraged residents to evacuate by any means necessary. 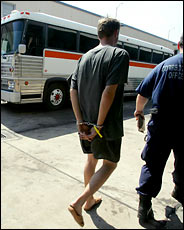 "I was hoping to get some towels to get a bath with."

This city has no gas stations, no grocery stores, no mail delivery, no hospitals and not very many people. But it does have a jail.

With all the major jails in and around New Orleans closed because of flooding, the temporary lockup opened Monday in the Greyhound Bus Station on the edge of downtown.

The jail will house people accused of looting and others arrested in New Orleans and surrounding cities, holding them until they can be sent to a state-run correctional center in St. Gabriel, about 70 miles northwest. There they will be arraigned and have an opportunity to make bail.

"This is a real start to rebuilding this city, this jail," said Burl Cain, the warden of Angola, the giant state prison in eastern Louisiana. State and local authorities worked closely to create the Greyhound jail. The Orleans Parish sheriff, Marlin Gusman, commands the lockup, but the staff is largely made up of state guards on loan from Angola, as well as volunteers from Kentucky.

In addition to armed guards from the Louisiana Department of Public Safety and Corrections and the Orleans Parish sheriff's office, agents from the Federal Bureau of Investigation, the Bureau of Alcohol, Tobacco and Firearms, and the Drug Enforcement Administration were at the jail, as well as two assistant United States attorneys, said Jim Letten, the United States attorney for New Orleans, who has set up an office in Baton Rouge.

The main jail in Orleans Parish, a county-size area that encompasses the city of New Orleans, is still under several feet of water. The 6,000 prisoners who filled various state and local jails in the parish at the time of Hurricane Katrina have all been moved outside the city, Sheriff Gusman said. The temporary jail fills a void by giving the police a place to take the people they arrest, he said.

"We have to make it possible for the police to do their job," Sheriff Gusman said. "You cannot do a thing unless you feel safe."

Inside, the jail looks a little like a jail and a lot like a bus station. Prisoners are photographed and fingerprinted, then transferred to holding pens topped with razor wire in the lot behind the terminal. Behind the ticket counter, medics wait to handle injuries to prisoners or guards. A small handwritten sign proclaims, "Welcome to the New Angola South."

David R. Dugas, the United States attorney for Baton Rouge, said the temporary jail in New Orleans was being powered by "a generator large enough to run Angola prison."

On Monday, the jail was as hot and sticky as the rest of New Orleans, although fans kept up a steady breeze as inmates were processed by employees, including Jonalyn Cain, Mr. Cain's wife. Wearing a bulletproof vest, Ms. Cain said she would have rather been somewhere else but wanted to be near her husband.

The temporary jail has 16 holding pens, each with room for about 40 prisoners and watched by a handful of shotgun-wielding guards. On Monday night, the pens were mostly empty, with fewer than 100 prisoners divided into five pens, three for women and two for men. Local authorities said Tuesday that 150 people had been arrested in recent days. Some could face federal charges.

The New Orleans police are still concentrating on rescue missions and patrolling the streets and are making few arrests, so most of the prisoners came from Jefferson Parish, just west of New Orleans. They had been arrested mainly for various looting-related offenses, Sheriff Gusman said. James Thomas, of Metairie, a city just west of New Orleans, said he had been brought in after taking towels from a store.

"All my towels - they was used up," Mr. Thomas said. "I was hoping to get some towels to get a bath with." Another man acknowledged that he had stolen a car and protested that government officials had encouraged residents to evacuate by any means necessary.

In general, the prisoners said they were satisfied with the conditions, but they said they were upset that they could not make phone calls. Several asked a reporter to notify their parents that they were alive and said they did not know how they would rebuild their lives once released.

"I lost everything," said one prisoner, Alphonse Douglas. "My house, everything."

Sewell Chan contributed reporting from Baton Rouge for this article.

New Orleans is an incredibly important place for Critical Resistance


We are heartbroken by the devastation in a city we love -- and by the media's racist and classist portrayal of our communities, the demonization of our brothers and sisters who have been in dire straits for decades, and the militarized, brutal response towards those left behind.