Photos from rally against racism in Leith Saturday 10th September 2005.

This is a short piece with 12 photos of the rally against racism which took place on Saturday 10th September 2005 in Leith, Edinburgh. 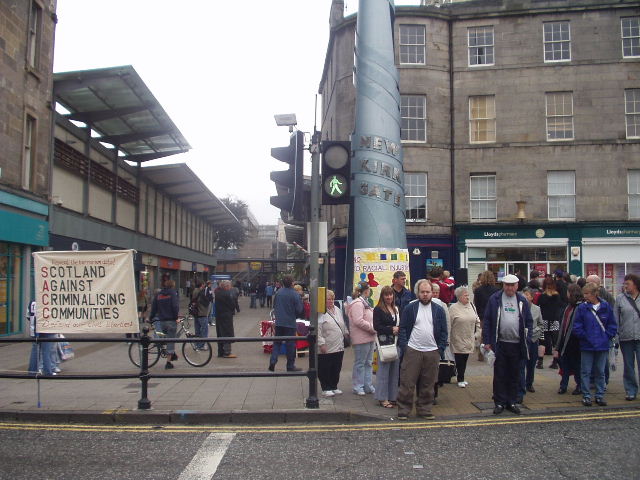 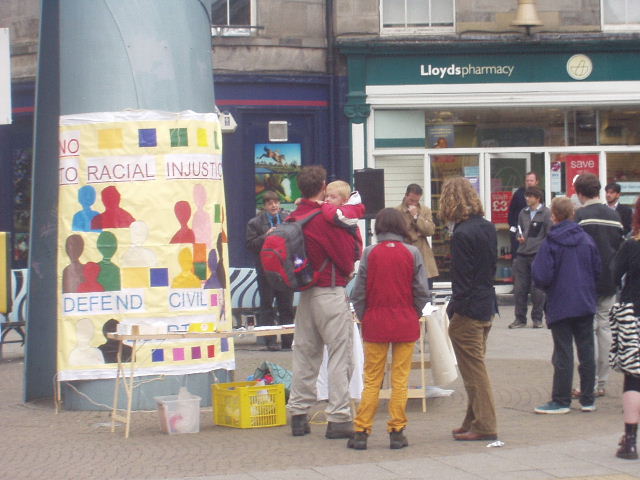 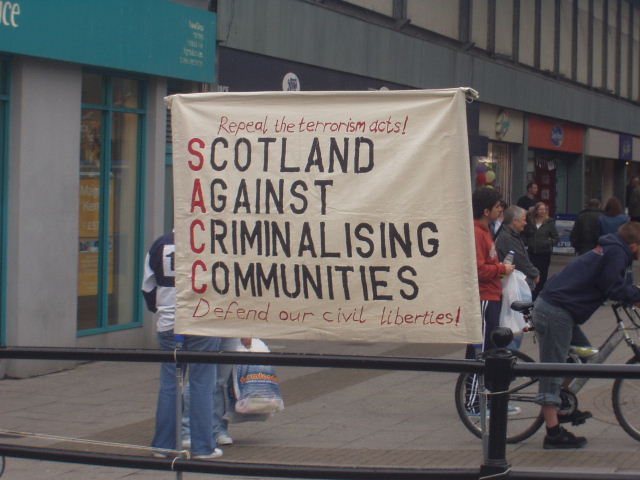 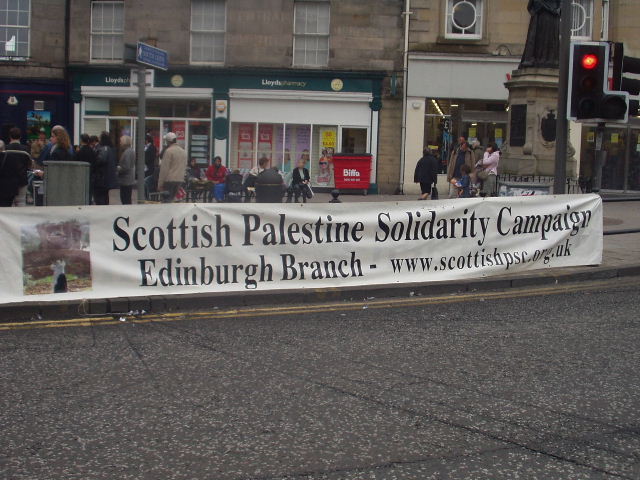 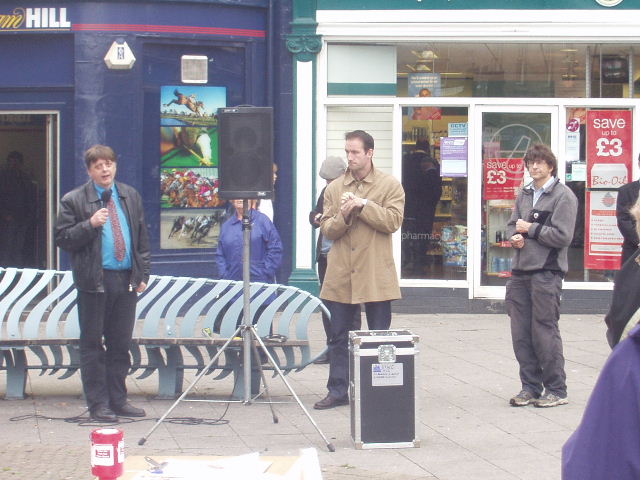 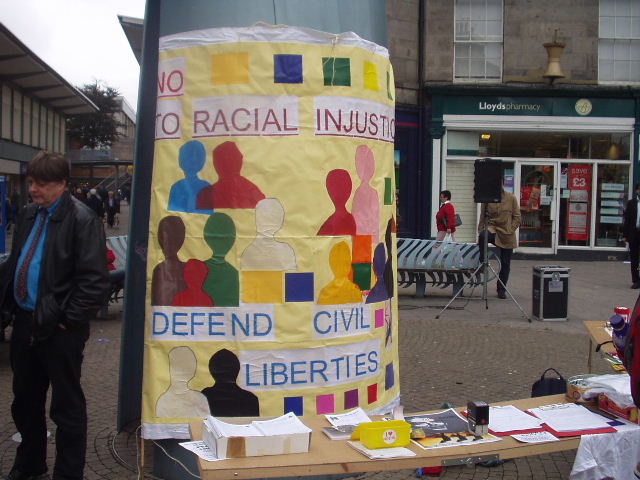 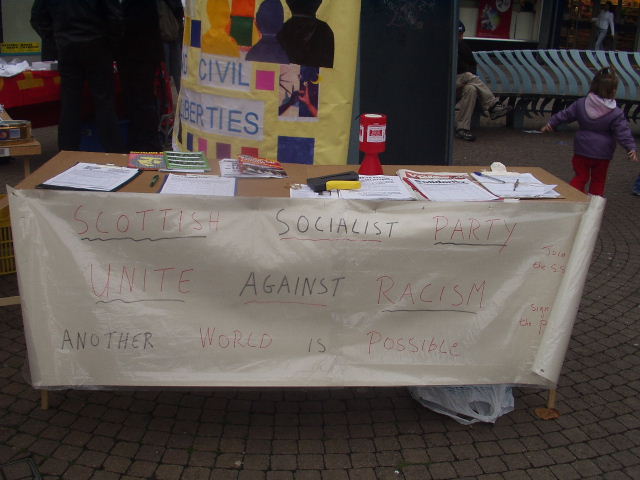 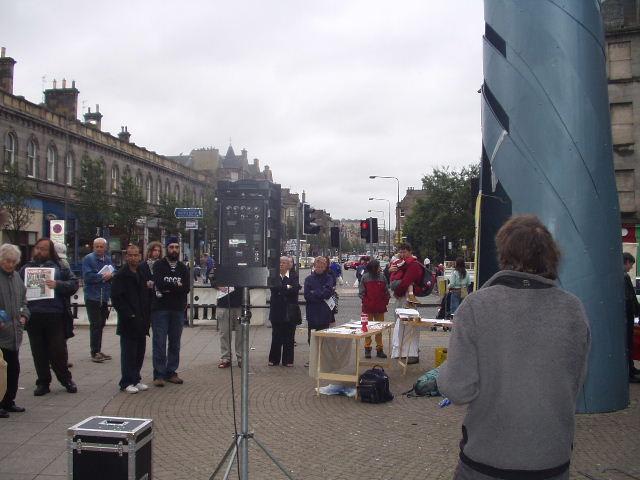 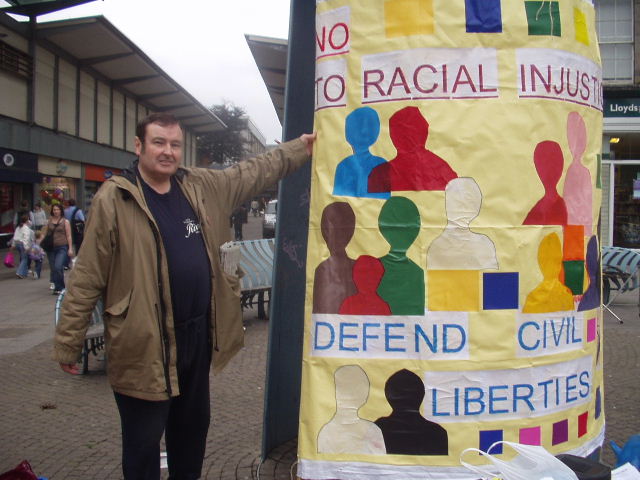 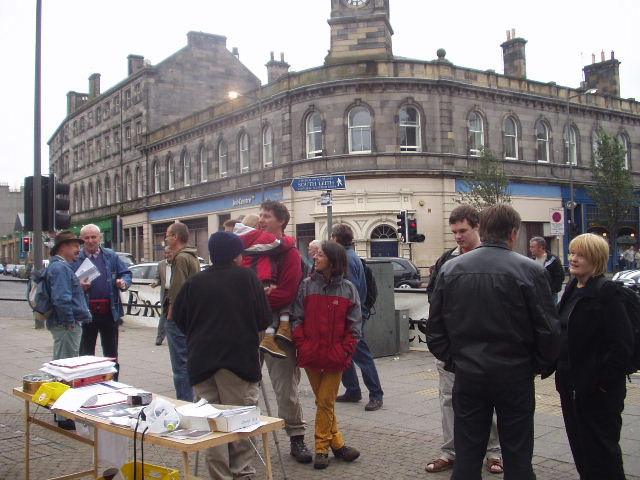 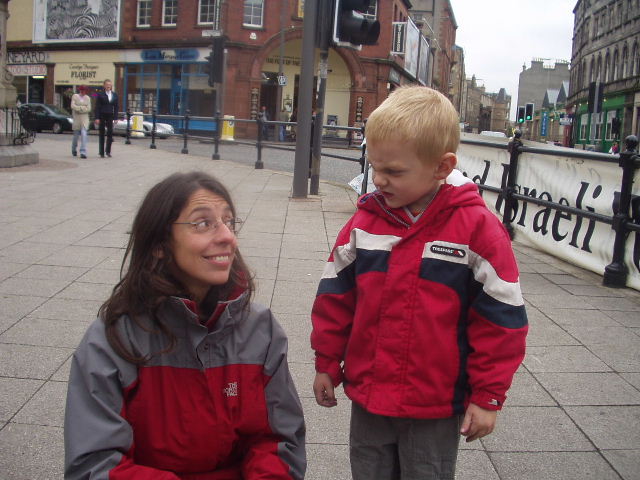 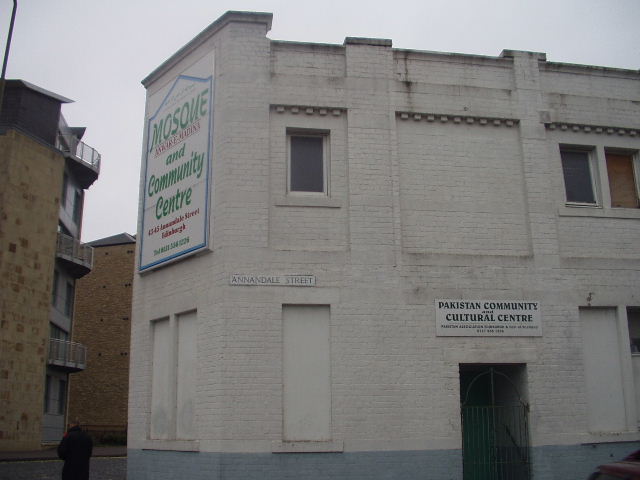 There was a rally at 1.00pm outside the New Kirkgate Shopping Centre at the foot of Leith Walk in Edinburgh on Saturday 10th September. Around 30 people from SACC (Scotland against Criminalizing Communities), the SSP (Scottish Socialist Party), Edinburgh Stop the War and the Scottish Palestine Solidarity Campaign braved the elements on a chilly Saturday afternoon to say no to racism and racist attacks.

There have been a number of racist attacks in Scotland since the terrible events of July 7th in London and two of them are described below. 12 photos of the day are attached.

Police have said that two Asians were racially attacked by a gang who made comments about the London bombings.
The incident came after Lothian and Borders Police called for calm amid fears that racial incidents might increase following events in London.
The gang hurled racist abuse and vandalised the car of the men who had parked near Leith Walk in Edinburgh.
Officers have appealed for witnesses to the attack, which happened at 1700 BST on Friday.
One of the men kicked the car, denting it, while another man threw a hammer through the vehicle's window, smashing the glass and hitting the passenger on the shoulder.
The two victims, who are aged 18 and 20, managed to escape by driving away as the gang of 10 surrounded the vehicle.

A force spokeswoman said: "This incident was racially motivated and the behaviour of the group to two men who were simply parking their car is totally abhorrent.
"Lothian and Borders police will not tolerate racist behaviour. It is a criminal offence and will always be treated very seriously.
"Fortunately the two victims, though badly shaken by the incident, were not seriously injured, although the passenger suffered some bruising to his upper body."
The police force issued descriptions of the two ringleaders of the attack.
The man who kicked the car was 5ft 11in, of medium build, and aged between 23 to 25, with a shaven head and a pale complexion.
The man who threw the hammer was 5ft 11in, of very skinny build, aged 23 to 25 and had black hair and a pale complexion.

Racist attacks in Scotland have risen by almost a quarter since the London bombings, according to police figures.
There were 438 incidents reported from 7 July to the end of the month. That was up by 79 on last year, with 64 of those directly linked to the bombings.
Senior officers said they were glad the increase was "relatively low" and that the figures showed people had adopted a mature attitude to the atrocities.
In London, religious hate crimes have risen six-fold since the bombings.
There were 269 religious hate crimes in the capital in the three weeks after 7 July, compared with 40 in the same period of 2004.
In Scotland, an average of 18 racist incidents were reported to police in July this year, compared to 15 a day last year.
Chief Constable Peter Wilson, the president of the Association of Chief Police Officers in Scotland (ACPOS), said there had been a "calm" response in Scotland.
"Any racist crime is unacceptable but I am glad to see the number being recorded is relatively low and has not risen sharply as a result of the London bombings," he said.
"The last thing we would have needed in Scotland would have been for our visible minority ethnic communities to have suffered as a result of misguided prejudices."
He said some communities, especially Muslim ones, were still feeling vulnerable.

"But it is also clear that there has not been a large upsurge of racist incidents since 7 July," he said.
"My plea to all of our communities is that the level of support and understanding continues.
"Scotland's eight police forces continue to work together to ensure that contingency plans are in place for any eventuality. That includes extra police presence wherever locally appropriate."
Mr Wilson said ethnic minority communities were becoming more confident in reporting crimes, which would previously have gone unrecorded.
"However, there is no doubt that there will have been other low level incidents that have not yet been reported to police," he said.
"We encourage everyone to report this type of illegal and dangerous behaviour, from whatever quarter, for full police investigation as we are determined that there will be a very robust enforcement response to it."
Ali Jarvis, interim director of the Commission for Racial Equality (CRE) in Scotland said: "Let's not turn smoke into fire.
"While there has been some increase in the number of racial and religious incidents in Scotland since the London bombings and we do not seek to minimise the effect that these have had on individuals, in the circumstances the increase has not been as bad as we feared it might."
"The majority of people in Scotland seem to understand that while the perpetrators may have been Muslim they are not representative of the overwhelming majority of Muslims.
"For every example of racial abuse or attack, there is also an example of a non-Muslim reaching out to a Muslim with a message or gesture of friendship and support."
Police are investigating one incident where two Asians were racially attacked in Edinburgh by a gang who made comments about the London bombings.
The men were subjected to racist abuse and their car was vandalised near Leith Walk on Friday afternoon.
Private meeting
Meanwhile, representatives of the Muslim community will meet Communities Minister Malcolm Chisholm on Thursday.
They will talk about their concerns following the London bombings in what is expected to be a mostly private meeting at Glasgow Central Mosque.
The Scottish Executive said the visit was part of continuing liaison between the government and multi faith groups.
Mr Chisholm has stressed the importance of building bridges between communities.