FOOD NOT BOMBS has groups all across the southern United States feeding families displaced by Katrina.

Veggies has sent $100 from it's 'Samosas for Social Change' project - please help us send more. 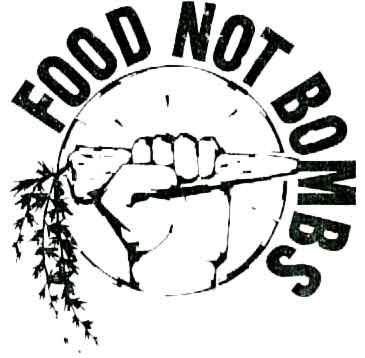 People all over America have been calling Food Not Bombs asking what they can do to help the people made homeless by Hurricane Katrina. Food Not Bombs has started organizing buses, vans and truckloads
of food, kitchen equipment and clothing to the people fleeing the disaster. It’s a real honor that so many people are looking to Food Not Bombs to help. So far we have busloads of material support and volunteers from Los Angeles, Minneapolis, Dayton, Hartford, Tucson, and Saint Petersburg. Volunteers from the west are meeting in Houston and people from the east are meeting in Baton Rouge. The first Food Not Bombs kitchen is outside the Houston Convention Center. The Baton Rouge kitchen will be set up shortly.

Because this disaster may last 6 months to a year or more we intend to set up Food Not Bombs field kitchens throughout the region. Food Not Bombs is encouraging the refugees to participate in cooking, serving and collecting the food. Their participation may be one of the most therapeutic things we can provide. It is possible that as many as a million people will be homeless for the next 6 months as a result of this disaster.

In a few weeks many of these people will be considered regular members of America’s homeless population. In 1989, Food Not Bombs fed the people made homeless by the earthquake and after a few weeks the
working class victims were forgotten and faced the same problems as those who were homeless before the earthquake. Because this could be such a long crisis it may be better for us to teach people how to organize their own local Food Not Bombs group easo they can provide long-term support.

Help feed the victims of Katrina.

Please donate c/o Veggies at the Sumac Centre, or at Veggies Events, or online at