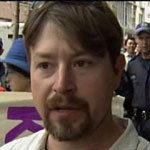 The Australian Government has charged an American peace activist who was removed from Australia yesterday $11,000 for sending him back to the US.

Activist Scott Parkin was arrested in Melbourne on Saturday after intelligence agency ASIO deemed him a risk to national security.

The 36-year-old says he conducted peace workshops and anti-war protests during the three months he spent in Australia.

He has been charged for the cost of his detention, the flight back to the US for himself and two Australian Government escorts and their accommodation in Los Angeles.

But Mr Parkin has told the ABC from Los Angeles that none of his actions posed a security risk.

"I'm just completely baffled by this," he said.

Mr Parkin says his legal team in Australia will seek compensation over his removal.

The rapid and widespread response to the detention of US peace and global justice activist, Scott Parkin, has been heartening and effective on many levels. Actions have taken place in Melbourne, Sydney, Brisbane, Cairns and outside several Australian Consulates in the United States.

a bill for the bullets

One of the most intriguing aspects of life is the existance of 'oracles'. This idea is a little misunderstood, but basically it means that there are ALWAYS predictors of future events, these days found in OUR means of communication, films, books and the like.

When Terry Gilliam wanted to tell the story of '1984' without having the rights to the book, he took an inspired path, and the result was 'Brazil'- one of the most important films ever made. (ASIDE- in the book 1984, Winston is ONLY arrested after he makes a CLEAR statement that he is prepared to commit the most horrific terrorist acts. This is a key event, but is REMOVED from the film version, and other tellings- ask yourself why).

Brazil provides a terrifying vision of a BRITISH FASCIST society, dreamlike and fantastical, but rooted in how we do things, and see ourselves. The script is clever beyond words, although the intellect is appropriately hidden beneath whimsy and slapstick. At the beginning we learn the fate of a poor innocent, a victim of a random mistake that parallels the visible circumstances of Blair's murder of the Brazilian to a T.

Anyway, to the point. After we witness the brutal (by the standards of the year of the film's realease, today the same brutality or greater is commonly used by Blair's police) arrest of the innocent, we watch as bound and hooded (Blair's universal method of arrest in Iraq) he is informed that all state costs, especially for the electricity used to torture him, will be charged to him and his family.

Original idea- well of course not. It was intended to be a reference to ALL the brutal regimes of Earth's history that have pulled such tricks, most recently (back then) the East Germans charging families for the bullets used to shoot down their loved ones.

Australia may puzzle us at the moment, but these colonial countries that NEVER grew up ALWAYS exhibit extreme right wing behaviour that they THINK emulates the values of the homeland. Australia, distant from all the world's problems, acts as if it were right at the centre, and has become a pimple of festering fascism, at a level that probably embarrasses and inconveniences even Blair. For while Blair appreciates any cheerleader, John Howard is such an obvious raving loon that he is becoming counter-productive. Of course Hitler had the same problem with Mussolini, so these things do happen.

The twisting of the law that this represents is becoming commonplace though. The USA protestors that took medicine to Iraq prior the invasion, or tried to protect key civilian infrastructure during the invasion, are being crucified in the US courts as we speak. While the penaly for murdering a wounded Iraqi in a mosque in Fallujah is a hearty slap on the back for the US army butcher, the penalty for a nun walking on the grass in front of the US torture training facility - The School of the Americas - is two years in prison.

Anyone watching any of the US lawyer crime shows for the last 10 years would have seen an emphasis on the CREATIVE use of the law to persecute people in a way that the law was NEVER intended for. Most people fail to realise why this is an horrific abuse of process, and contradicts the whole principle of law, as contained by those statutes created and passed by democratic parliaments. The word of law CANNOT exist if the words can be twisted by those lawyers that work for Blair or Bush or Howard.

Even when abuse of law is struck down by higher courts, future potential victims of such abuse feel warned, and are likely to act in a way that suits the abusers. Worse, as Blair has shown, when abuse is struck down by a re-application of the WORD of law, monsters such as Blair use this as an excuse to convince parliament that the abusive use is desirable, and must be passed as an explicit law, to show that parliament does not bow down to the courts (which was NEVER the case, since the courts were just upholding the law as ORIGINALLY passed by parliament).

So, to summarise- people might as well give up on Australia at the moment, because that country only seeks to be a distorting, and magnifying mirror to the abuses occuring within the UK and USA.
Only when the sickness is cured in the UK/USA (and that IS NOT going to happen) can Australia return to some kind of normality.

...I think we want to think twice before listening to someone who can't tell the difference between make believe and reality

Thanks for mentioning this film twilight. I will Bittorrent it.

Re the 1984 film, the CIA had a hand in it's production didn't they? I must look into that.