The Corporate Academy and the George Fox 6

On Monday 26th September, the trial of the George Fox 6 commences at Lancaster Magistrates Court. Six student activists face charges in a three day arising out of an action that took place at Lancaster University in September 2004 where protestors had gone into the George Fox building at the university to hand out leaflets and talk to people at the "Corporate Venturing" Conference - a networking meeting for multinational corporations. Speakers at the conference were drawn from controversial arms manufacturer BAE Systems, Shell and other companies the six say have 'long histories of human rights abuses and environmental destruction'. Police attended and told the protestors they were doing nothing wrong, but some months later they received summonses through the post. The defendants are seeking support at the trial.

...a trial - a charge against those who share and nurture knowledge that the old men do not like

Lancaster University, founded in 1964 ,and according to it's own website "one of Britain's top universities. The Times Good University Guide 2004 said Lancaster was "among the top dozen universities for research and in the top 20 for teaching".

In 1974, new colleges were opened at the Uni, which operates an Oxford style collegiate system. One of them was Pendle, named after the region associated with the 17th century witch trials of 1612, where 10 accused were sentenced to death after a three day trial in which they refused counsel or the right to call witnesses.

There is some irony in the fact that a University which, in the recent past, chose to identify buildings and colleges with miscarriages of justice, is now actively involved in the suppression of academic freedom and an attempt to criminalise dissent against corporations such as Bae and the nefarious Carlyle Group. Their actions are yet another indication of the growing intolerance of dissent in a society which sees growing corporatisation of all spheres, including the academy.

The students have been charged with the 'offence' of aggravated trespass, a charge which has been used against animal rights activists and anti-corporate protestors on numerous occasions since the Anti-Social Behaviour Bill made the offence, which was first used against squatters on outdoor land, applicable to events which take place inside buildings.

Charges were dropped against activists who entered the Iraq Procurement Conference in April 2004, after they sought to use the trial to highlight the illegality of an occupation force selling off Iraqi assets. When a group occupied the offices of the conference organisers, the CPS substituted a different charge.

Protestors operating under the smashEDO banner in direct actions against Brighton "weapons interface" manufacturers EDO MBM have also been prosecuted for the offence in two separate trials, where despite one group being found not guilty, the defendants were subsequently named in an application for an injunction against harrassment brought be the company which exhibits at DSEi

It is perverse that students risk being criminalized for leafleting conferences where companies that are widely known to be involved in a activities such as corrupt dealings with military dictatorships, climate change and human rights violations and cronyism and nepotism are in attendance, whilst the corporate criminals cry that they are intimidated, and the state pretends that what the companies do is lawful.

That the University pretends that students are tresspassers on their own campus is astounding to many!

The corporatisation of the Academy

To see the academy hurrying to join the state in prosecuting those who take a stand against the very impersonal trans-national corporations that rob, rape and pillage our planet should come as a surprise to no one. Neo-liberal policies have effectively ensured that the impoverished academy is more likely to side with its corporate sponsors, who pump in larger amounts of capital than individual fee paying students, undermining academic freedom in the process.

Individual students, the majority of whom will leave university up the eye-balls in debt, are pressured to pursue the agendas that the corporations dictate, at the expense of student solidarity. Thus there appears to be no mention of the travails of the George Fox 6 on the Universities Student Union site leaving many applicants to the University unaware that they are about to join a University that has little respect for academic freedom or dissent.

Interventions by groups such as Liberty, local counciloors, Lancaster Quakers and the National Students Union have fallen on deaf ears. An online petition has had no effect on the Vice-Chancellor, and a letter writing campaign has elicited standard replies which suggest that the letters are not even being read. NeoLiberal nuLabour minister Ruth Kelly, in her first speech on Higher Education, urged other Vice Chancellors to follow suit.

As a theatre critic at a Lancaster University production of 1984 noted:

" But in this case, I was also painfully aware, on this occasion, that 1984 was being played – by students, at Lancaster University - at just the same time as six of these students’ peers were being hauled through the courts on politically-motivated charges at the behest of the faceless bureaucrats and the global capitalists."

George Fox must be turning in his grave...

Open Letter from the VC: My U-turn 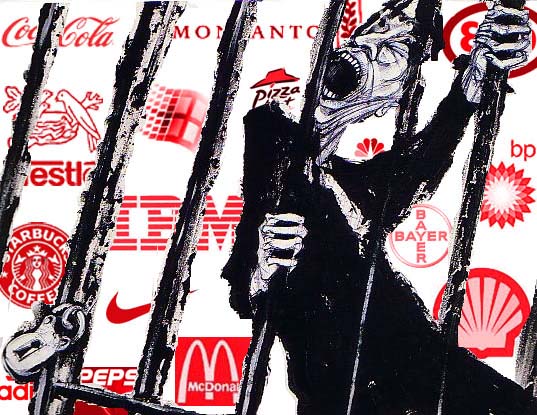 TO WHOM IT MAY CONCERN:

It really concerns me that so many people have been interested in the case about the socalled George Fox Six. I am, to say the least, uncomfortable with the image of Lancaster University that is being circulated in Cyberspace as a consequence of this unfortunate case. It is a not a quick, done deal as the Crown Prosecution Service promised us and the threat of the use of ASBOs - which is a matter dubious per se in legal terms - looks disastrous for this institution's social responsibility project. That is why I have decided to do a U-turn.

I herewith support the GF6 and call for action to be taken against my institution. Democracy relies upon social movements and the work place requires some reasonable demands from the labour force to stay dynamic, so please help us correct our mistake and come and show your support for the GF6:

The trial begins on Monday 26th of spetember, at Lancaster Magistrates court. Lots of people have expressed an interest in turning up on the day to show their support - and we would indeed like as many people as possible to come and display their solidarity, not just with those being prosecuted, but with the belief in the right to protest and freedom of speech, and against the oppressive behaviour of the uni and the police.

Moreover, people interested in collaborative research around and beyond the implications of this sad case are also welcome at the (Counter-) Knowledge Lab, organised at Lancaster University by a coalition of students, academics, and activists. It is with great pride that we manage to incorporate such contradictions at Lancaster. One of the sessions will be focused on the GF6 and also the wider struggle in the work place

Hopefully the sessions will lead to a stronger vision of strategies and tactics for action.

support the six at their trial

The George Fox Six are on trial from the 26th September!

Join them at court on Monday to show solidarity and support Free
Speech and "Education not Exploitation"!