"After people have been in detention for extended periods of time, almost all people that I've come across have harmed themselves in some way." 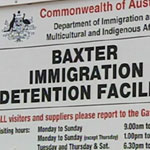 AUSTRALIA: (Lateline): More than half of the 900 self-harm incidents over three years occurred in the Baxter detention centre.

Nearly 900 immigration detainees have tried to harm themselves in the past three years, Immigration Department figures reveal.

The figures show there have been 878 attempts at self-harm and half of those attempts occurred at the Baxter detention centre in South Australia.

The details have been provided in response to a freedom of information request made by Sydney academic and author Denise Leith.

"These are people who have sought from us asylum," she said.

"These are people who probably are in pain or have been traumatized."

The head of Psychological Medicine at Adelaide's Women's and Children's Hospital, Jon Jureidini, has assessed detainees at Baxter.

"After people have been in detention for extended periods of time, almost all people that I've come across have harmed themselves in some way."