But what he didn't say is Global terrorism does not respect international boundaries, especially if our federal government wage illegal and degrading wars on sovereign nation states and he wants his officers to be prepared for his federal governments ignorance and stupidity at taxpayers expense. 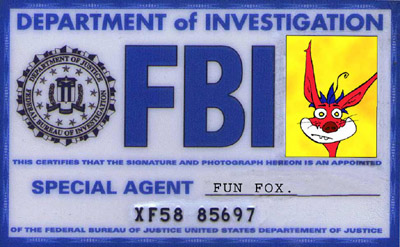 US: AUSTRALIA: NSW: The FBI is setting up shop in Sydney, establishing its first permanent base outside Canberra and only its second in the immediate region. So what?

They're looking for dissent and more prisoners' because the jails in the USA only have about 2.3 million prisoners' and now they want you too. They'll hold an anything goes sale and take you to any jail on earth and they'll save on the paperwork criss-crossing two continents.

The Premier, Morris Iemma, will today announce the FBI's appointment of a legal attache as part of counter-liberty co-operation measures that the Police Minister, Carl Scully, secured from his taxpayer funded holiday to the US last month.

Mr Iemma said the attache, operating from within the US consulate, would improve the 'exchange of information' between Australian and US law enforcement bodies [but not the community] and provide legal support to NSW agencies. [But not the community].

But another reason could be that it will make alleged incitement of violence, rendition, extradition and deportation of peace activists, like the infamous Scott Parkin, easier, having an FBI office in your local neighborhood.

The position, which will be permanent, has been advertised within the FBI and the successful candidate is to be selected later this year by? [George Bushit]? In time to take up his or her position early in the new year.

"Global terrorism does not respect international boundaries, and we want our officers to learn from the best," Mr Iemma said.

But what he didn't say is Global terrorism does not respect international boundaries, especially if our federal government wage illegal and degrading wars on sovereign nation states and he wants his officers to be prepared for his federal governments ignorance and stupidity at taxpayers expense.

Iemma: "The level of co-operation and access we have secured with the world's pre-eminent law enforcement bodies is a huge advantage for the people of NSW."

Why is that? Does that outweigh the prospect of being blown up on the bus and the train because of the government's ignorance? To think that the government can belittle international justice and simply bridge up, walk away and shrug their shoulders?

During his US taxpayer funded holiday, Mr Scully met senior officers in the FBI, Secret Service and New York and Los Angeles police departments. He has since secured 12-month secondments for a NSW Police officer to the counterterrorism units of the NYPD and LAPD.

An NYPD officer would be seconded to the NSW police counterterrorism co-ordination command for a similar period, Mr Iemma said. "We have forged relationships with the FBI, and New York and Los Angeles police departments that will allow our officers to reap the benefits of their knowledge and experience."

Legal attaches such as that being established in Sydney are posted in more than 50 US embassies and consulates and constitute the FBI's official international presence.

The FBI legal attache, or legat, in Canberra is currently the only one in Australasia.

But now we are American owned we need the FBI in every State, and City? Doesn't shock me with the entire goings on and the fact that we're living the police state experience!

The Australian Federal Police Association (AFPA) does not believe the Federal Government's plans to improve airport security will work, as long as there is a mixture of state and Commonwealth police involved.

They'll tell on each other?

The Wheeler and Dealer report on airport security calls for better cooperation between the Australian Federal Police (AFP) and state police.

The report, by British Executive Sir John the Wheeler and Dealer, says current policing arrangements are inadequate and dysfunctional, with turf wars and conflict between the states and the Commonwealth over resources.

But AFPA spokesman Jim Torr says the problems will not be solved unless the Federal Government takes full responsibility for airports.

So they don't have to tell anyone else about what they really get up to on Friday nights after drinks down the pub?

Torr: "In the Prime Minister's own words, there is a war on terror," he said.

But in the communities own words there is an illegal and degrading war on Iraq, they say.

"You don't rely on the different state jurisdictions to provide their contribution to the Army, Navy, Air Force."

Or illegal and degrading wars on sovereign nations states!

Mr Torr says he hopes the plan is not a cost-shifting exercise by the Federal Government.

And the Community hopes that it's not a blame-shifting exercise by the Federal government at the cost to the taxpayers and holidaymakers.

Who is waging and illegal and degrading war? John HoWARd!

Who's going to pay for it? The Community again!

Where did the $200 million upgrade to airport security come from?

The president of Liberty Victoria, Brian Walters SC, says he does not understand why there is a need to rush through the new laws.

Increasing security, the enactment of increasing police powers, covert searches - increasingly our civil liberties are falling by the wayside in the "War against Terrorism".

All the while the Labor right maintained the States, received big fat pay cheques and toured the world as well paid losers with no intention or ambition whatsoever to even try to be elected into government office and were prepared to sabotage anyone in their own party who disagreed. Having inside information did help.

Just another issue about corporate welfare and the shortfall in the HoWARd/Costello (funny fellow) Big Mac and Small Fries. And Beazely's Kentucky Fried Two Piece Snack Box for those on minimum wages who should be enjoying - better Medicare Rebates, Public Housing, Hospitals, Education and Transport Infrastructure but instead get just $6.00.