The myth that buses are the source of Birmingham's traffic congestion problem was dramatically debunked last Saturday (17th Sep) when Birmingham Friends of the Earth staged a 'sit-down demonstration' in the streets of Digbeth. 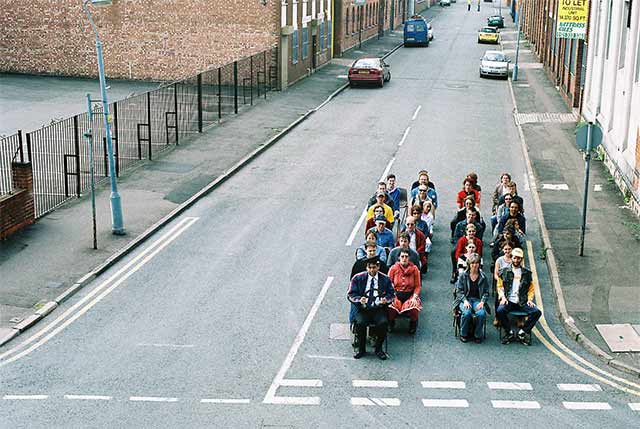 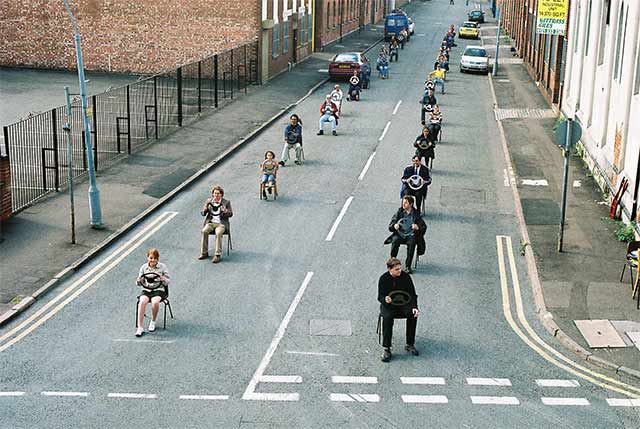 With nothing more elaborate than a few chairs and some cardboard steering wheels, fifty volunteers sat for a striking group photograph conveying a simple home truth about congestion, one that the City Council and business community still don't seem to appreciate but which public transport users have known all along: that cars, not buses, are the reason Birmingham is the congestion capital of the Midlands.

By spacing themselves out in the road to represent, first fifty single-occupancy private cars, then a single-decker bus with fifty passengers, the fifty sitters will graphically illustrate the advantage of public over private transport in an inner-city setting. Birmingham FoE called the photo-shoot to draw attention to the issues surrounding local transport and the environment in the run-up to European Car-Free Day, Thursday 22nd September.

"We need to put our brains in gear if we are to effectively manage the road transport system. There are 27 million cars on the UK's road network compared with fewer than 200,000 buses, most of which are indispensable to the more than one third of households in metropolitan city areas who do not
have access to a car. A double-decker bus takes up one seventh of the road space of the equivalent number of cars, and yet it's buses that get the blame for clogging up our roads."

Commenting on the City Council's decision not to formally participate in Car-Free Day this year, Mr Stride added:

"Car-Free Day raises awareness of the downsides of our culture of car dependency: worsening traffic congestion, air and noise pollution, global warming, and social dislocation. On the positive side, it's a great excuse to try alternative means of getting around. Naturally, we are disappointed
that Birmingham is not officially taking part in Car-Free Day this year, but we are pleased that the City Council is actively promoting Travelwise Week, to highlight the benefits to our health, society and the environment of walking, cycling and public transport. And we are delighted to see that Centro, the public transport authority, will be handing out free bus and train tickets to tempt car drivers out of their vehicles on 22nd September. If this gets hardened car commuters into the habit of using public transport more often, then the City will breathe more easily and we will all benefit."