Photos and audio from the demonstration held in London on Saturday 24th September 2005, called by Stop the War Coalition, CND and MAB. Includes MP3 files of two speeches, the samba band and a jolly tune which was playing on the Rinky Dink. A short report is included. More photos coming soon. 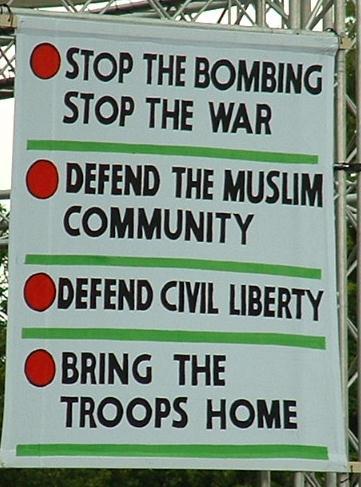 On any other day this would be a Serious Organised Crime 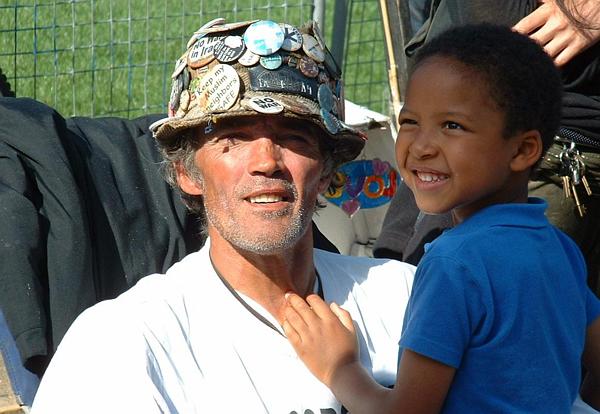 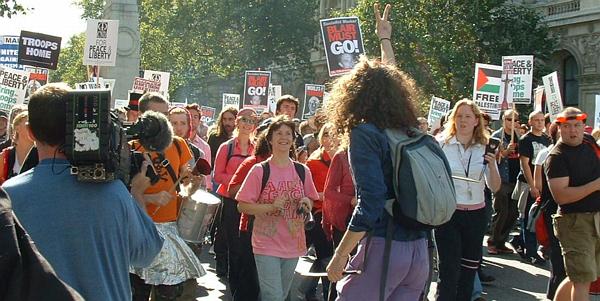 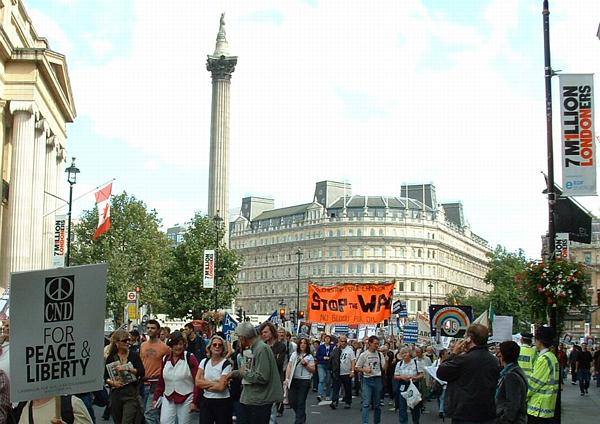 We marched round the corner of Trafalgar Square 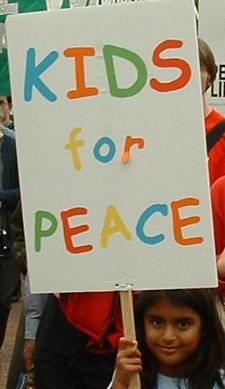 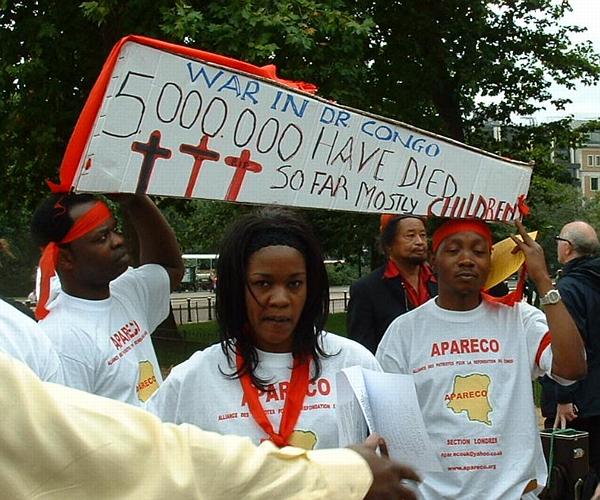 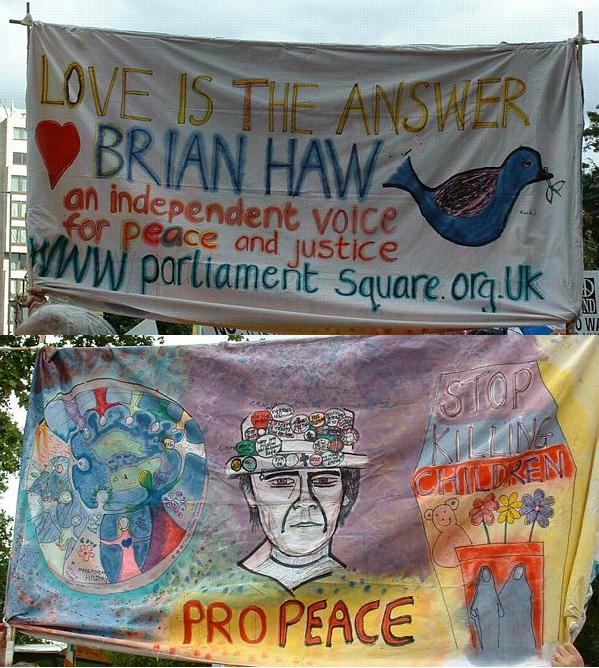 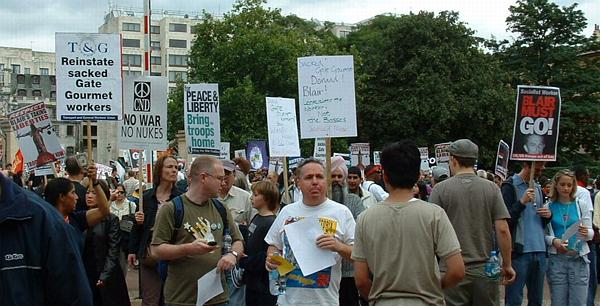 On the way into Hyde Park 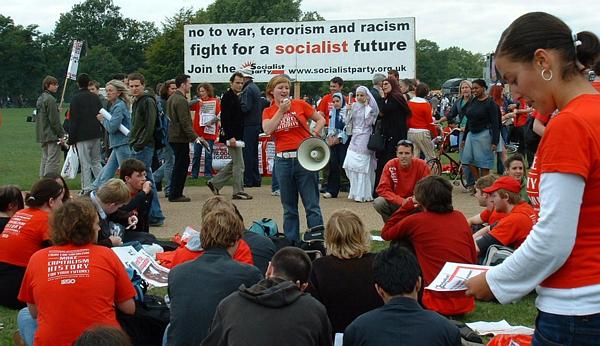 Socialist Party holding their own mini-rally 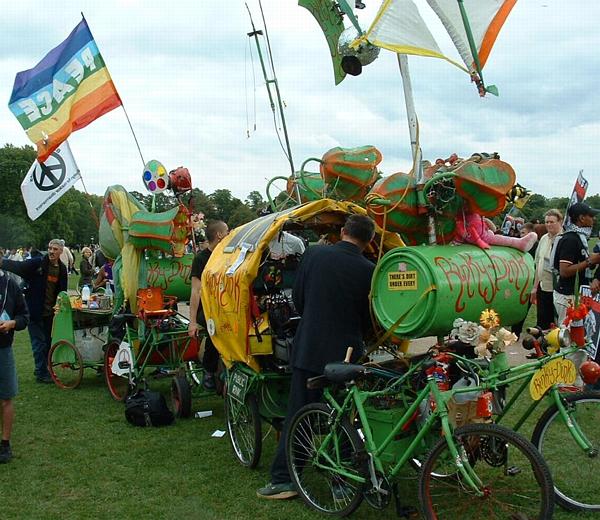 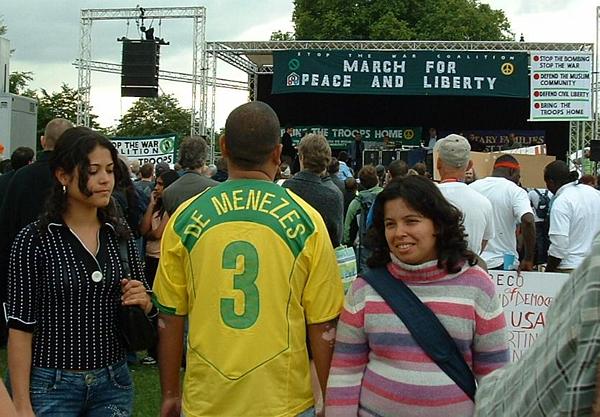 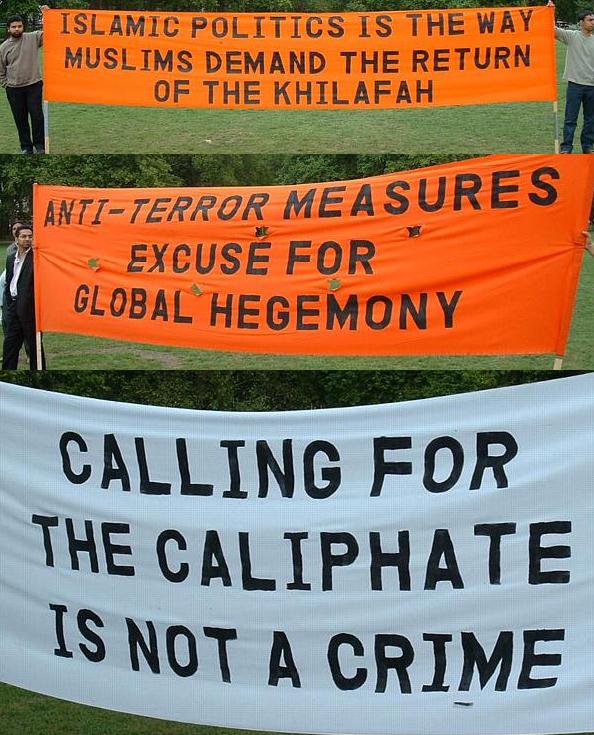 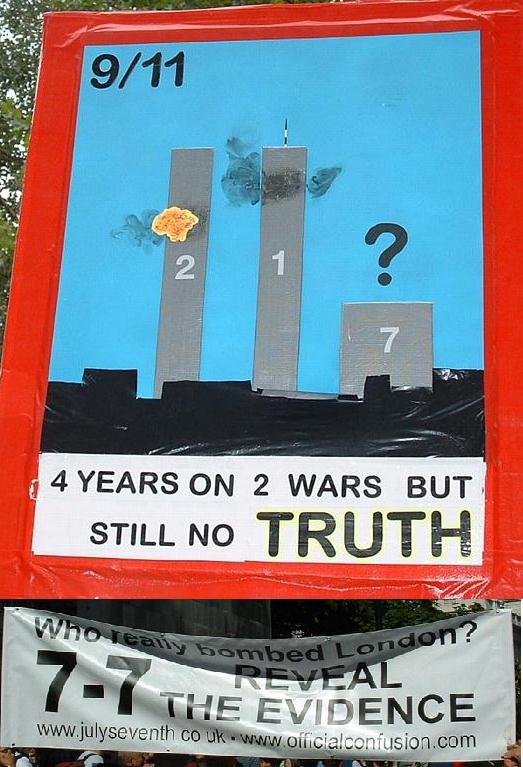 The marchers gradually assembled in the gardens of the Parliament Ticket Office and along the road in front of the Houses of Parliament. I presume that the organisers had arranged prior police permission for this assembly point, otherwise the marchers would be committing a Serious Organised Crime by assembling there. Although the grassy area of Parliament Square was cordoned off, and Brian Haw’s (still legal) peace camp was apparently being guarded by a line of yellow-jacketed police, marchers and other passers-by were visiting the peace camp without interference from the police, reading the placards and information on display, taking photos and chatting with Brian. More photos to follow.

A large and rather pink samba band provided entertainment for the waiting marchers, of which a 1 minute 16 second mp3 clip is attached. This is recorded at 16kbps to keep the file size small for dial-up users, but I can upload a higher-resolution version on request.

One organisation I hadn’t come across before was Hizb ut-Tahrir, which describes itself as “a global Islamic political party working against western imperialists and their proxies in the form of Arab and Muslim dictators”. It is already defined as “terrorist” in many of the Arab and Muslim countries run by western-supported dictators, and Tony Blair recently announced that he planned to proscribe the party in the UK.

From chatting to one of their activists for a while, and from reading their leaflet, they don’t sound like a terrorist organisation to me, any more than the SWP are. Their idea of a “Caliphate” across the whole Muslim world, governed according to true Islamic law (not the perverted versions of the Taleban or the Saudi Wahabis) sounds to me much more agreeable than the current arrangement, although my anarchic tendencies aren’t too happy with the need for a “Caliph” to rule the whole thing.

We marched to Hyde Park, and near the end of the route a small crowd had formed around what appeared to be an anarchic art exhibition. Attached to the railings were a series of mounted and framed cartoons, subverted propaganda and photographs, apparently for sale although it was not clear who they could be bought from. Some photos of these to follow.

Inside Hyde Park, Stop the War stewards were urging the marchers to drop their placards on a big pile unless they intended to take them home. Hopefully this measure made it easier to clean up Hyde Park afterwards!

Rebel Labour MP Jeremy Corbyn was on fine form, and brought forth a stream of righteous anger at what our government is doing in our name with our money. He summed up the recent incident in Basra quite neatly.

“And what happened in Basra this week, you couldn't have written a play about it. You couldn't have made it up. British SAS officers, armed to the teeth, driving through a checkpoint, dressed in some Arab clothing, then try to shoot their way out of it. And then they were arrested, apparently quite properly, by the local police, and the British army then bombard the police station in which they were held. Who are the lawless forces now?”

A doctor from Iraq, whose name I didn’t catch, brought an eye-witness account of life on the ground in Mosul and Tal Afar. Both this and Jeremy Corbyn’s speech are attached as MP3 files.

I just happened to be in the right place at the right time, when to two relatives of murdered Jean Charles de Menezes were introduced to a supporter in a sports top bearing the name “de Menezes” on the back, and all three posed for photos.

An MP3 file of a jolly tune which the Rinky Dink (mobile sound system powered by renewable energy) was playing when I was passing, is also attached.