After8 is a music weekender showcasing the best in Live Rock and Live Hip Hop that Derby has to offer. Organised by Derby residents who undertook a sponsored cycle to the G8 summit After8 hopes to raise over £5000 for Greenpeace and Oxfam as well as awareness regarding the G8s role in creating poverty and climate change.

An After 8 compilation CD featuring all bands involved shall be available throughout the weekend.

For more info and directions check out www.after8.givingabitback.net 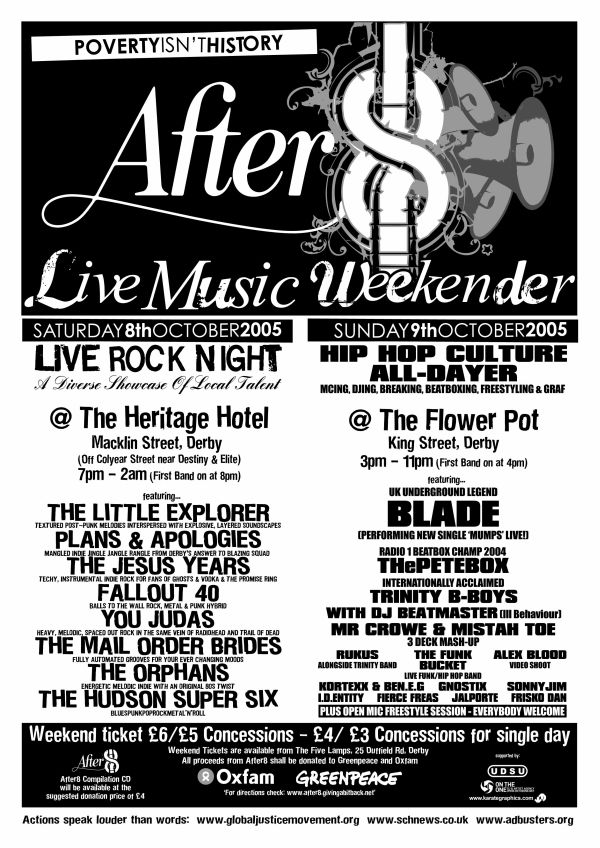 On July the 2nd 2005, 5 amateur cyclists from the city of Derby peddled into Edinburgh to join the diverse congregation of campaigners who were demanding that the leaders of the eight most powerful countries in the world “MAKEPOVERTYHISTORY!”. Good intentions were expressed from podium to press release, yet ultimately the G8 failed to present itself as the solution to global poverty. As highly-esteemed journalist, John Pilger, stated following the summit: “In summit after summit, not a single significant "promise" of the G8 has been kept…It is a fraud - actually a setback to reducing poverty in Africa.”

Derby lads – John Banks, Oliver Frearson, Richard Kelly, Simon Jones, and Ashley Stirland – undertook a sponsored cycle from Leeds to Edinburgh in order to protest against the harmful affects that G8 policies were having on the worlds poorest plus the G8s absolute dismissal of the reality of climate change. Supported by Clare Garnett and Sarah Whitehurst who drove alongside them, whilst camping along the way and enjoying the generous hospitality offered by campaigners met on route, the boys managed to complete the 250 mile cycle and raise £700. In order to raise more money this £700 has been invested in a fundraising music event that shall combine music with politics in a way that hopes to raise awareness regarding the undemocratic, unrepresentative and unaccountable illegitimacy of the G8 summit plus over £5000 for Greenpeace and Oxfam.

On Saturday 8th and Sunday 9th October the “After8” music weekender shall be kicking off in Derby, showcasing the best in live Rock and Hip Hop the city has to offer. The event aims to raise awareness regarding the role that the undemocratic G8 summit plays in exacerbating poverty around the world whilst securing its own economic position of privilege and simultaneously fuelling the crisis of climate change, something described by Sir David King – the governments chief scientific advisor - as “the most severe issue we are facing today.” An After8 compilation CD, featuring songs from all bands supporting the event shall also be on sale and all proceeds from the event and the CD shall be donated to Greenpeace and Oxfam to help combat the causes of climate change and global poverty.

On Saturday 8th October at the Heritage Hotel, Macklin Street, from 7pm until 2am there shall be local Rock bands The Little Explorer, Plans & Apologies, The Jesus Years, Fallout 40, You Judas, The Mail Order Brides, The Orphans and The Hudson Super Six.