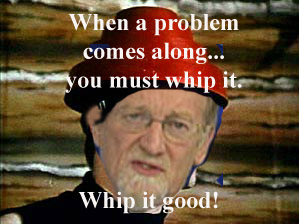 it's not too late to whip it, whip it good!

Evans doubts reports
that 800 potential
terrorists are living
in Australia.

AUSTRALIA: Head of the International Crisis Group and former Labor foreign minister Gareth Evans says while the threat of a terror attack on Australian soil is real, it is a moderate one.

Crack that whip, give the past the slip, step on a crack, break your momma's back.

He says he is sceptical about reports that suggest 800 potential terrorists are living in Australia and warned police to be careful in applying new Australian anti-terror laws.

Mr Evans said he does not have a problem with police using racial profiling to help identify suspects, saying it is a reality of the current global climate.

"The extreme political correctness that has led some of the American law enforcement authorities to be sort of religiously strip-searching 90-year-old ladies because that's what they have to do to demonstrate that they haven't got any racial bias built into it, is palpably absurd," he said.

Mr Evans says if there are 800 potential terrorists in Australia, it may be the result of government security agencies broadening their definition of Islamic extremism.

When a good time turns around, you must whip it, you will never live it down, unless you whip it, no one gets their way, until they whip it!

He says there is a big difference between Muslim activists and those with a violent political agenda.

"What I fear is that there's a bit of a disposition to run all those categories together, and say 'Anyone who's expressing distaste for the Government and doing so from a kind of religious perspective, is a potentially dangerous terrorist'."

I say whip it!

Devo and the Monster!

Over the past several years, the Howard government has passed a series of dangerous new laws. These laws have undermined our basic legal and democratic rights.

Send and e-mail to your premier now! Tell them where to go!

'New terror laws? We're already suffering under the current ones!'

With both the federal and state governments agreeing new more draconian anti-terrorism laws, Mr Les Thomas, brother of Jack Thomas – the Melbourne man facing court under terrorism offences – today spoke out about his fears concerning the operations of current legislation.

All Sieg Heil John Howard as his enabling act gets passed.

Months before Bali Au warships were seen invading Iraqi territorial waters in deliberate provocations under American protection. It was obvious that Howard had decided before Bali to join in an illegal and aggressive invasion of Iraq and in fact , when that happened, it was led by Au stormtroopers BEFORE the ultimatum given Baghdad had even run out!

As reported in the Australian today, ASIO has apparently identified up to 800 people deemed a potential security risk. Ruddock says the draconian COAG measures "deal with people who pose a risk to the safety and security of the Australian community." Hmmm, like detained and deported US peace activist Scott Parkin perhaps? What is this broad definition of a "Terrorist"?

Civil libertarians and lawyers describe the anti-terrorism laws agreed upon by the Commonwealth and States today as "a severe erosion of individual freedoms; appalling, totalitarian and un-Australian," and will lead to the "creation of a fascist state; to lead to a police state"

The Reichland was calm today following the passing of the Fuhrer's enabling acts. These acts were drawn up to deal with the disgraceful state of anarchy that the Reichsland was falling into.

A law will be passed outlawing the "glorification" of terrorism and the introduction of an offence of committing "acts preparatory to terrorism." This introduces the Orwellian concept of "thought crime" into British law.

Devo and The Monster