an environmental protest comprising sand dump and banner drop with megaphone and samba band went without hitch at the shell centre on the south bank at midday today highlighting the shell development in rossport, county mayo in the north west of ireland. 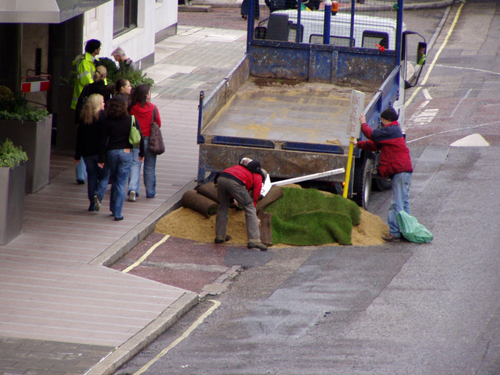 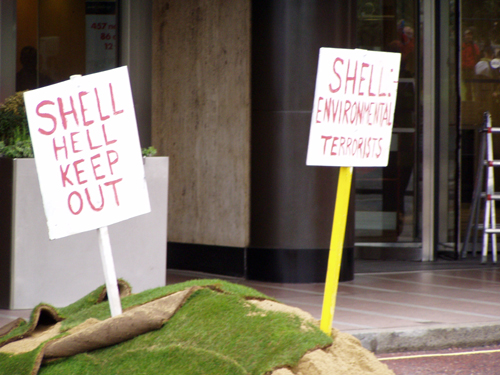 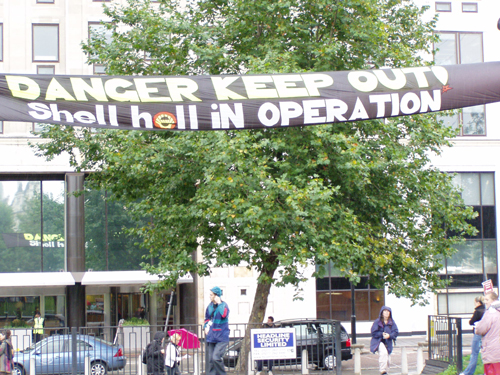 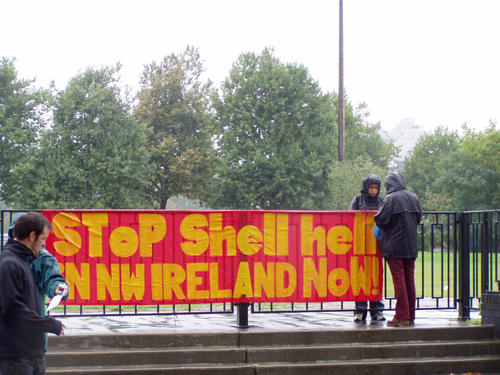 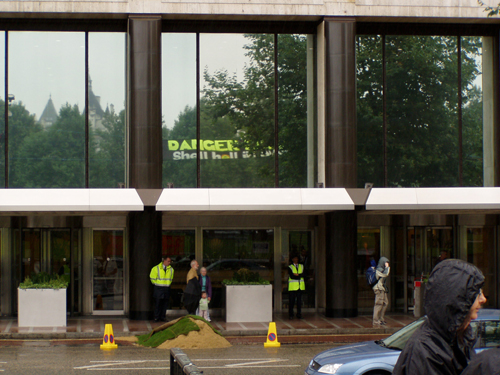 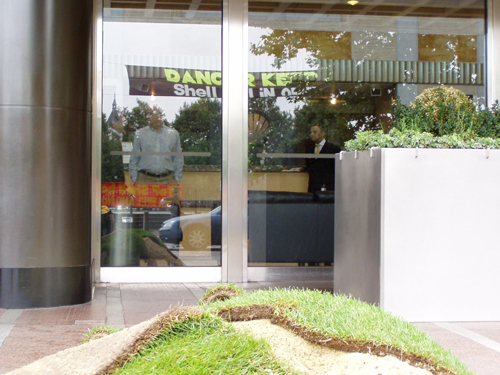 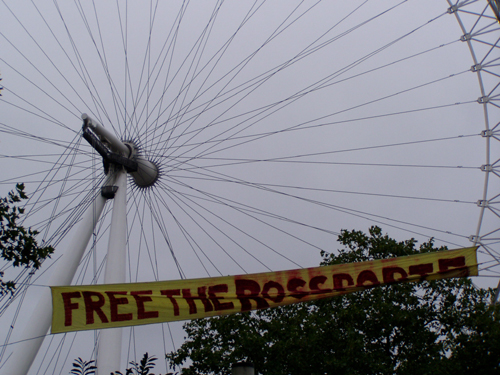 at just after midday today activists arrived outside the shell centre entrance on the south bank in a seven and a half ton lorry and dumped a large mound of sand and turf infront of baffled security guards. the activists topped off their creation with placards bearing the slogans "shell hell - keep out" and "shell - environmental terrorists" before driving off.

meanwhile, climbers quickly mounted lampposts and trees across the road and fixed a huge banner "danger - keep out - shell hell in operation" while other activists handed out leaflets, a megaphone gave out information, a small but very loud samba band started up, and more large banners stating "stop shell hell in nw ireland now" and "free the rossport 5" were put up.

the action caught shell, south bank security and police by surprise, and once underway was allowed to continue without hindrance. it is suspected that this is because shell were anxious to avoid further the publicity likely through attempts to smother the protest.

the action was aimed at highlighting the way shell runs roughshod over local communities. they are responsible for health problems, spills, toxic releases and even the murder of local peoples around their plants in nigeria, south africa, texas, louisiana, the phillipines, curacao, and brazil.

today's action focussed on the remote conservation area of outstanding natural beauty in the north west of ireland at rossport in county mayo, where shell are poised to cause a likely environmental disaster zone with serious public health and safety implications. it comes a day before and in solidarity with the shelltosea irish campaign's day of action in ireland on the 1st october.

after a lengthy and dubious planning process shell are building an unprecedented dangerous raw gas pipeline across farmers' land to a massive onshore refinery, poisoning the area, endangering residents and further adding to climate change.

due to compulsory acquisition orders shell are free to access private land to prepare the new pipeline. the high court has passed injunctions preventing local people from protecting their homes and families, and the struggle has culminated in the jailing of five rossport residents (including a 65 year old ex-teacher) for contempt of court. their incarceration is indefinite until they either "purge their contempt" and allow shell access, or until shell drop the injunctions.

the irish state has sold interest in its gas fields for a song, removing its 50% stake and introducing 100% write-offs against development costs. half the oil will go to the uk. the consortium also includes norwegian company statoil (with norway taking 78% of its profits) and marathon oil (texas).

the pipeline itself will carry raw, odourless gas at five times the usual pressure over unstable bogland with a history of landslides and through villages and small farmland to a massive refinery to be built just two miles from the region's water source, lake carrowmore. the line will also carry electric cables, hydraulic fluids, cleansing acids and waste. all of this because offshore refineries cost more.

the refinery itself will have nine chimneys releasing co2 and methane into the atmosphere. it will be constructed on unstable bog using untried methods to stabilise the bog surface. there are 16 houses within 2km of the plant. construction will displace 160,000 cubic meters of peat bog, and the wastewater storage sump is liable to overflow into lake carrowmore despite eu and un protected status.

toxic waste will pump into broadhaven bay and due to tidal patterns much of it will remain in the bay contaminating important bird, whale, dolphin and fish habitats.in shell's environmental impact statement (eis), they omitted to mention the site was of importance to wildlife despite its status as a special area of conservation under eu regulations, and their own commissioned study showing the area as an important breeding and rearing area recording over 220 sightings of seven species of whales and dolphins, two seal species, basking sharks, and sea turtle. the area also provides livelihoods to local communities through fishing.


"no other country in the world has given such favourable terms as ireland..." - mike cunningham, former director at statoil exploration, ireland.