This is a copy of a letter sent to ABC online this morning in response to their 'current affairs' programme "Insiders". It reads, in part, as follows: "On your webpage you declare "Insiders" is a, "fast-moving treatment of national affairs". Because of the loaded reporting style, I would say Insiders is more like a gaggle of protection for the elite, and a thorough-going endorsement of the state's handling of national affairs." 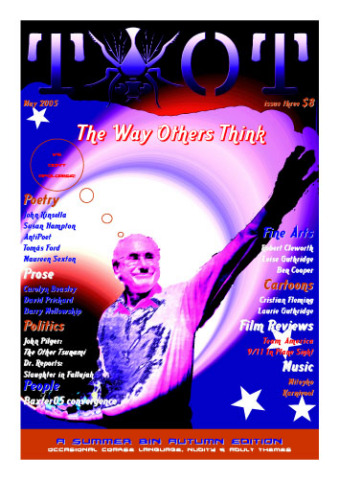 Gaggle of protection for the elite

AUSTRALIA: These shows demonstrate how even our best mainstream news/current affair shows are effectively another corrupt decoy for career politicians (and the rich they serve) to legislate their way to further wealth... via media cronyism.

Occasionally I drag myself out of bed on Sunday early enough to watch your collection of prognosticating journalists going under the name of 'the Insiders'. I did so this morning and heard the panic picnic about terorism at home and abroad (esp. Bali).

May I ask what your guests are "inside", Barrie? Our politicians' minds and policies? A sewer? A cosy little Sunday club? Or, all of the above?

Howard, Beazley, Downer, Ruddock, et al, are lying every time they open their mouths in public... and these are the people your reporters seem to know so well. Why should viewers expect pollies' allies in the media to let us in on the real picture? I don't. Programmes like "The Insiders" purport to be investigative and progressive, but inevitably wind up blowing Howard's bugle for him.

Piers Aching-man, perhaps "sorry Laurie" Oakes' main rival for 'aussie' asinine superiority, derides everyone who sees current events differently to him, and assails any/every (rare) comment that comes from the left field (David Marr or Misha). What is he inside? He is a despicable disinformation agent more than anything else.

Likewise, Andrew "nuts and" Bolt(s), sucks more effectively than expensive vacuum cleaners. He is a shameful conduit for state propaganda. I was once an empty-headed cocky, god-bothering know-it-all like him, too. Thankfully, I saw the 'light', and it was dark! Writing for mammon (even if under the banner of 'god') is just not worth it, I'm no longer into fausticuffs.

And who does Paul Kelly think he is? For that matter, what's with the reverence you give him? Is he the face on Mars or something?

Crabby Annabel talks about "trust" like a gullible little schoolgirl-one that hasn't discovered her daddy's involved in prostitution. What on earth have these politicians done to earn our trust? You trust them Annabel, I'm buggered if I will. Your crabby denunciation of George Galloway displays exactly whose camp you're 'inside'. Knowing which side the bread is buttered, you decry the bravest voice in British politics. Put your mirror back in your handbag and go back to the girl guides.

America engineered its own terror scenario by allowing, maybe even planning 9/11. They got their Nazi style "homeland security" and wars in oil-rich Afghanistan and Iraq. England engineered the subway attacks. Suddenly 'Poms' could cope with Tony Bliar's insincere vocal strains again-even his backbenchers have stopped calling for his resignation. Bobbies can now carry guns and the Brits have given the world a template for murder of innocents via the summary execution of Jean Charles de Menezes. Don't you think governments do this in times of national struggle? Think (or research) back to Nazi Germany and the Reichstag Fires! Or Pearl Harbour!

Mainstream journalism and media refuses to even investigate such angles. That is why there is a need for more honest reporting, which only comes via the internet, which is why freedom-hating governments like Australia and America are attempting to outlaw internet sites, etc. The hypocrisy is breath-taking for anyone with the skills to actually read between the lines (lies) of the media.

John Howard has a happy knack of appropriating other nations' terror as our own-he cares not whether it's US, UK, or Bali. Indeed, by jumping into an illegal invasion of Iraq with the megalomaniac George Bush, he boxed Australia into this nightmare. Fear has been his main electoral weapon in consecutive elections, and continues to be the stick behind much of his legislation.

Have a proper gander at the news, Barrie. It's on the web, far away from your nonsense of 'trust'. Remember, the Germans (and Prescott Bush, George. W's grand-daddy) trusted Hitler too. Australians should beware who their politicians jump into bed with.

Latham had it right before he got cold feet. Bush's America is immoral, illegal, and dangerous. Australia should tell them and Howard to piss off.

Your show is just another example of an ideological state apparatus at work-only marginally better than the commercial nonsense pushed by Ray Martian, Mooney Yvette and the like.

However, it gives me good insight into the mindset of the journalists who set the tone for Aussie thinking. No wonder we get results like Howard 4 times running. This is the real inside story of "Insiders": what makes Australia's right wing journalists tick?... Egos, dollars and a mentality of naïve trust. We trust the government juggernaut, and you should trust us.

How do these 'experts' differ from the politicians they serve? The only circle they are 'inside' is a ring of liars perpetuating falsehoods for the benefit of the wealthy. I can remember reading a report in "The Bulletin" 15-20 years ago called "Is Our Media On The Nose?"

It was then, and it is now!

Alexanda Drowner was asked would he pressure Indonesia to ban JI on Sunday CH9.

He said, "Oh they are a shadowy figure". Even though he went hammer at JI for causing the bombing.

Inependent media is where the truth will be found for all who have had their bellyful of mainstream media propaganda.

Here in America, the mainstream media serves as "waterboys" and lackeys for the New World Order power elite.

All free-thinking people of the world are strongly urged to seek out independent sources of information if interested in more than mere corporate-controlled hype and tripe.

The truth is out there for all with eyes to see and ears to hear.

Incidentally, the United States government front is NOT America, nor is the evil cabal that drives it "America". We in independent media are battling the "collective coma of the conditioned masses" here in our country and stress the vital importance of ALL independent media throughout the world to push hard and bypass the mainstream, governmental, and corporate obstacles to exposing truth directly to the public.

I applaud your efforts, Barry Parsons. Please know you are not alone in this fight.

Many, many persons of conscience are fighting on this battlefield.
Most people don't yet realize the harsh reality, but the mind is the true battlefield in these "wars".

We all need to put up a fight. It will be the only way we can defeat this beast.

Federal and state leaders sold out democracy when harsher laws were agreed at the Terror Summit. The stronger laws potentially threaten to target Muslims and dissidents with searches, raids, and secret detention. In a country without a Bill of Rights, the draconian Terror Laws set us up for police statehood.

They know where you live

Head of the International Crisis Group and former Labor foreign minister Gareth Evans says while the threat of a terror attack on Australian soil is real, it is a moderate one.

All Sieg Heil John Howard as his enabling act gets passed.

Months before Bali Au warships were seen invading Iraqi territorial waters in deliberate provocations under American protection. It was obvious that Howard had decided before Bali to join in an illegal and aggressive invasion of Iraq and in fact , when that happened, it was led by Au stormtroopers BEFORE the ultimatum given Baghdad had even run out!

There is a consitutional human rights protest outside the Liberal HQ (104 Exhibition St) at 11:30am on Wed 5th October.

This protest organised by Joseph Toscano (and friends?) seems like a good opportunity to protest the new so-called anti-terror laws that will deprive us of our rights.

We need to at least object to being stripped of our civil liberties.

Come and make some noise!