Is Tony Blair an MI5 agent?

Mr Shayler believes Dr David Kelly was an MI6 agent who was murdered and he alleged that Tony Blair worked for MI5 before he became Labour leader.
Ex-MI5 officer David Shayler alleged so at a public meeting in Bristol last week, as was reported in the Bristol Evening Post. Money quote:

Unfortunately, Shayler's exact words were not reported, making it difficult to assess the claim. Luckily, I found a recording of his words at this website.

Shayler was speaking to 9/11 sceptics in Bristol. They showed a video, then he spoke and took questions. The topic moved from 9/11 to the July 7th bombings in London. Shayler suspects the British security services might have had a hand in 7/7. An audience member asked about MI5's possible complicity in 7/7, and, if so, whether Tony Blair's government was involved or were kept in the dark. This was Shayler's response [my transcription]:

Yeah, I mean, I don't know how involved Blair is - it's a difficult question to answer. I mean, certainly I know, as I say, the intelligence services do things behind the backs of government, the cabinet and parliament - it's very easy in this country to do that, as there's no oversight of the services. And, in some ways, they don't want the government to know, so, when they are sent out to deny these things, as Robin Cook was, they can do it looking honest, basically.

But I think the only way we can explain Blair's behaviour is that he is blackmailable by the intelligence services. I know that the intelligence services have files on most of the Labour government because I saw some of the files while I was there. In fact ... [inaudible audience interjections, laughter] ...Well, one of the things I want to tell you is that - I actually, I didn't see this myself, I must admit - but somebody who was reviewing Blair's file, this was when Blair was unknown really, in 1992, not particularly well known, told me that Blair was an MI5 agent. In the 1980s he'd reported on members of CND and the so-called Trotskyists in the Labour Party. Now, I've tried to get to the bottom of this, it's very difficult. But it would in some way explain why he does what he does, basically, because he's actually a stooge, he's one of them, basically.

Shayler may be wrong about many things, but he's right that the Blair-as-MI5-agent report has much explanatory value. But whether Blair needed to be blackmailed to act for MI5 is another matter - Blair's naivity, vanity and ambition, coupled with the state of the Labour Party in the 80s - may have been sufficient motivation for him to inform on "left-wing extremists" to his MI5 contacts. (But then that act of informing might itself become a blackmailable vulnerability, so perhaps Shayler's right after all.)

I dread to think what might be in Gordon Brown's file.

this is worth a read

this is a good read though...

http://www.declarepeace.org.uk/captain/murder_inc/site/psyopswakeup.html
lifted from the online magazine
'wake up'

Was Kelly MI6? is the sun hot?
Did Blair (and far more significantly Jack Straw) report to MI5 in their early days? is water wet?

Look, this is just how the system NORMALLY works. What exactly do you think the job of MI5 and MI6 is? Many, if not most of those that will rise to high rank in the government, or key civil service departments, will have been 'agents' of some kind for the security services, although 'agent' covers a very wide range of sins.

Think of it as a power game trade. As a young person, you promise to 'look out' for certain things and people, and in return, you get to 'meet' other power players that will help you in you ambitions.

Sometimes, the crudeness of the game is clearly revealed. In his youth, Straw famously (pretended to) campaign against the butcher Pinochet. When a minister, Straw personally arranged Pinochet's famous visit to the UK, and protected him from prosecution and extradition. The famous BLIAR psy-ops campaign was created so that people shrug such acts off as obvious political hypocrisy- the NORMAL way politicians are expected to behave. This is important, since the facts 'prove' that Straw's political acts as a young man were a front, and that he was an agent for the state. Laughably, when Straw first rose to significant power, a psy-ops campaign was run in the mass media telling how MI5 had monitored Straw when younger. Boy, nothing convinces more than MI5 telling me that a named individual couldn't have been working for them because they were spying on him, snigger snigger.

However, why pick on straw. MOST significant student leaders will have regular contact with the security services. Most of the key leaders of public pressure groups are agents too. If this WERE NOT the case, the heads of MI5 would find themselves immediately replaced. The game is very dirty, and intentionally so.

David Shayler, amongst other things, is a very DIM bulb. When he reveals that ambitious young Blair worked occasionally with MI5, he says nothing surprising at all. When he fails to put this info in context, and stupidly suggests that this means that Blair is, today, a stooge or a puppet, he unthinkingly promotes Blair's own cover story.

NOBODY blackmails powerful leaders!!! Damn, did you not notice all the things that Clinton got up to in office without consequence??? A powerful leader is a GOD to his people, and can get away with anything. Blair can point his finger at any powerful civil servant, and they are history. Same with ANY minister in government, or person of rank in the armed services. What the hell do you think happens when that power is in the hands of a ruthless evil person. After a few years as PM, Blair has NO-ONE of significance to oppose him. People might start to worry if they thought about this, so the CLOWN, PUPPET, STOOGE, BLIAR campaigns are ESSENTIAL to distract people from Blair's success in taking over EVERY power structure in the UK.

The magician only fools people if his act of MISDIRECTION works. How often are YOU misdirected by what you read or hear about Blair in the papers, or on TV. A few carefully placed lies, and a whole nation is wasting their time discussing those lies. What is it now? Three post Xmas campaigns telling people that Gordon Brown would be replacing Blair that coming year. I swear, Blair could run the same misdirection TEN years in a row, and STILL expect to tie up the majority of political discussion on that same false-flag.

Make me a promise please- when you are dying on one of Blair's future front-lines, or receive notification that one of your loved ones has just been killed at the front, make your words "Tony Bliar, what a clown that puppet is" so that the gods may look down upon you, and howl with laughter at the idiocy of the Human Race.

via the special relationship
and Thatchers attack dogs

when he never mentions
Operation Northwoods
or Operation Gladio...
or Michael Meiring, who was
sussed in the Philipines
and blew his own leg off
making bombs in a hotel room!

he never mentions
The infiltration of the IRA
by DET/FRU

and the Omagh set up

out of all of these - Lady Diana
is the one thing which puts people off...
it could well be that she was murdered, but...
in the context of dirty wars
the above seem more obvious examples

He also asserts that the UK government
gave 'Al Queda' [ahem] ?00.000 quid to blow away
Gaddafi


when Gaddafi has played a useful role for the last
?? years or so, taking the blame and playing
terrorist for the Lockerbie bombing and WPC fletcher

look what happened to him

I hear Wallace & Grommit are the new Q's. MI6 agents always knew it.

The Clown Prince of Umbrella Land

Ta for this link. I have heard Shayler make mention of the Force Research Unit BTW.

"Many, if not most of those that will rise to high rank in the government, or key civil service departments, will have been 'agents' of some kind for the security services"

And on what do you base this sweeping and frankly amazing assertion?

Having been following Shayler's careeer/revelations with critical interest, and indeed having closely questioned him in public debate (now on DVD) I would be most interested if you would provide, either publicly or via email, the exact file reference for the Bristol meeting at which Shayler claimed Blair was MI5 and the reasons he gave for doing so. Once I have perused that, and compared it to earlier versions/his statements on 21/6/05, I will then have a further comment. This topic is too important to be left to fantasists/conspiracy theorists

Here is a Good One for You!

Get this one :- Shayler worked for Mi6

I mean who really cares to waste there time on such dribble.

The 'Truth' movement do, what a joke! 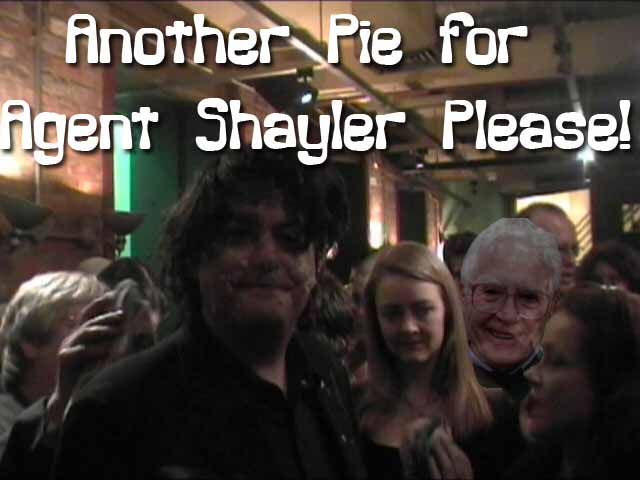 just to prove a point:

A deal has been signed with Libya allowing the UK to deport
foreign terror suspects without fear of them being mistreated.

The move follows a similar agreement with Jordan.

Under international convention, the British government can't send people
back to a country where they might face inhuman or degrading treatment.

Still waiting for something to back up your amazing assertion...YOOO HOOOOO

I see that you posted a dozen lengthy messages last night, all in the normal firm accusatory format, but stragely you overlooked responding to this thread or the ather challenging you for evidence. I'm sure it's just an oversight, and look forward to your response - assuming you have one! Otherwise I think we can all draw an obvious conclusion, eh?