The last two days saw the AIESEC careers fair taking place at Nottingham University. The Portland Building, where the Students Union is based was full of businesses promoting their oppertunities for the under and post-graduates. People within the university informed the students attending the fair about some exhibitors: 'the problem is, they supply arms to countries with appalling human rights records'.

Arms manufacturers such as Caterpillar, BAE systems and Rolls Royce exhibiting at the fair were targeted because of their non-commitment to ethical responsiblity and the way in which they 'lie about the truth'. The protest, organised by NSPM, took place on both days of the fair. The Student Environmental and Ethical Network (SEEN) is organising an ethical careersfair later in November.

19/10/05: Students at Leeds University succesfully shut down BAe stall at the AIESEC careersfair at Leeds Uni. 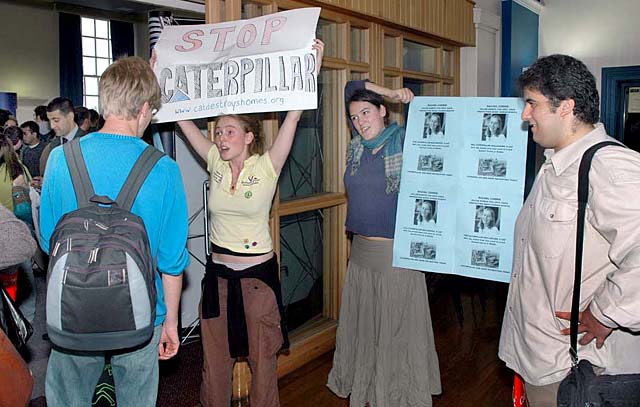 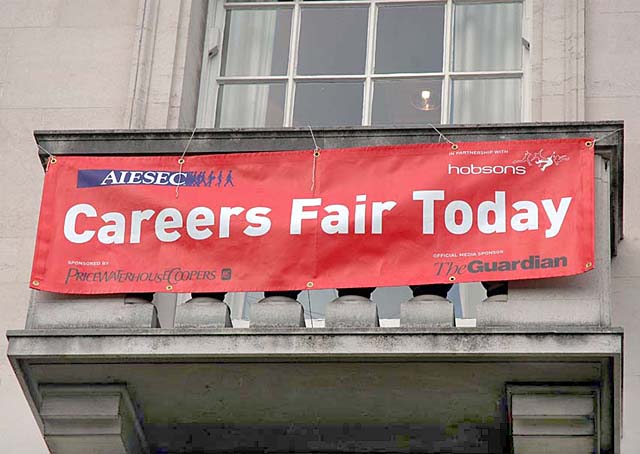 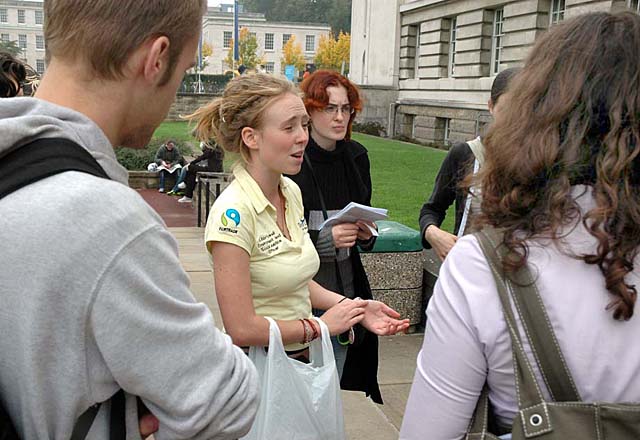 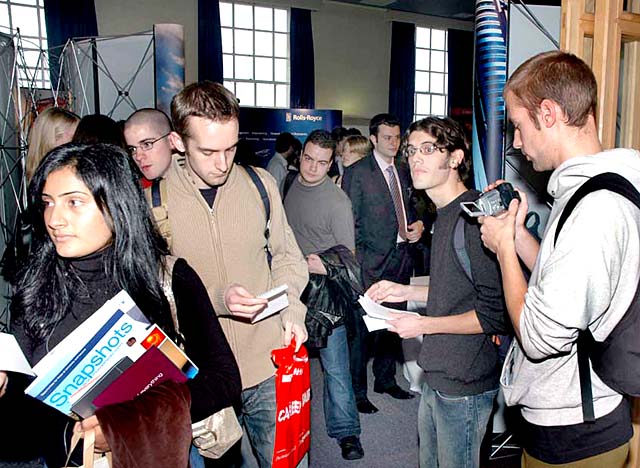 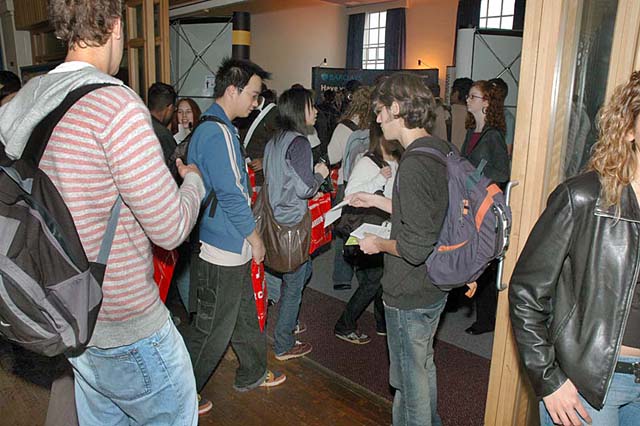 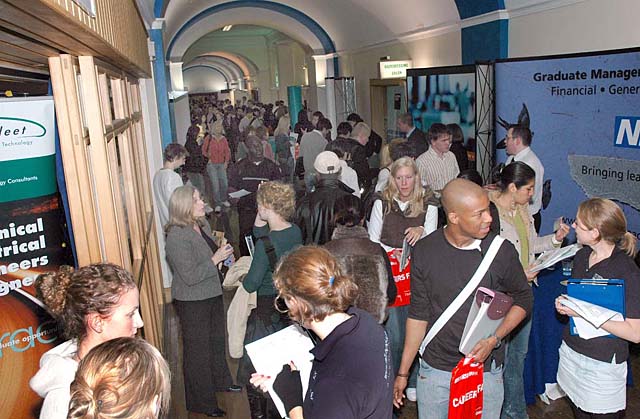 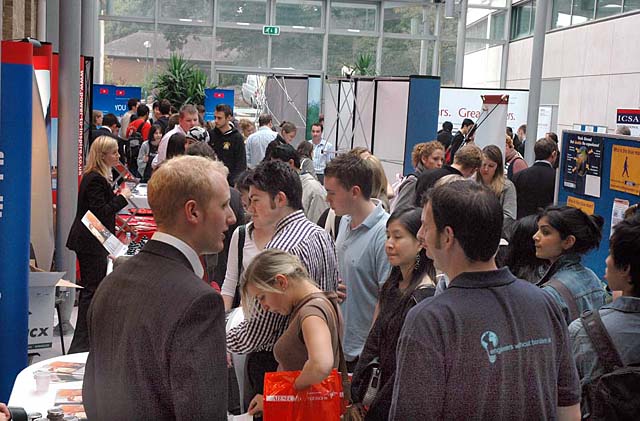 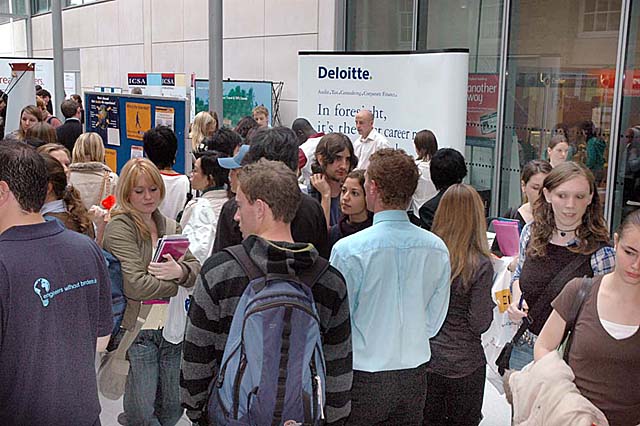 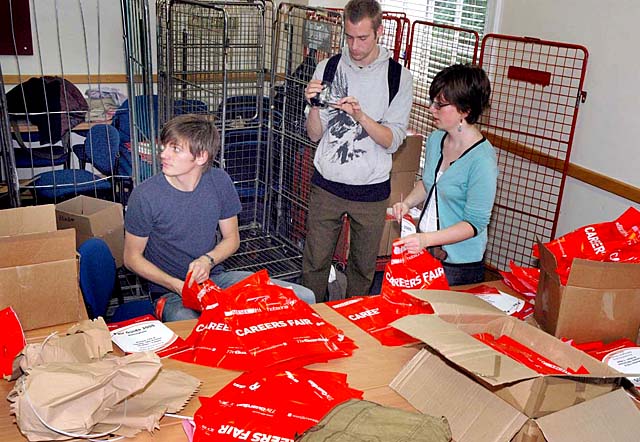 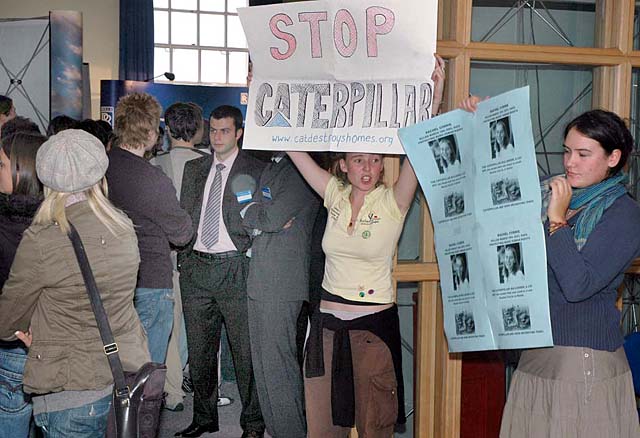 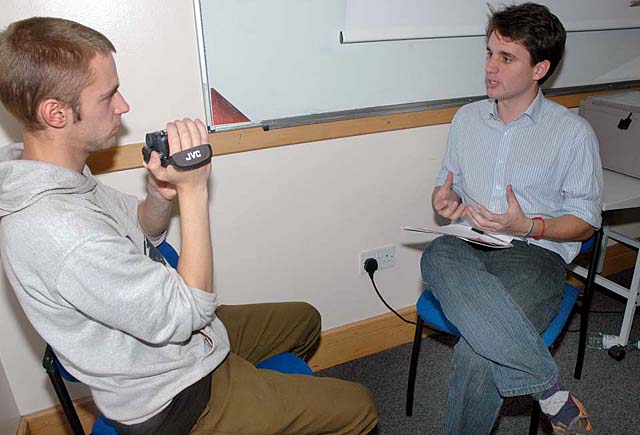 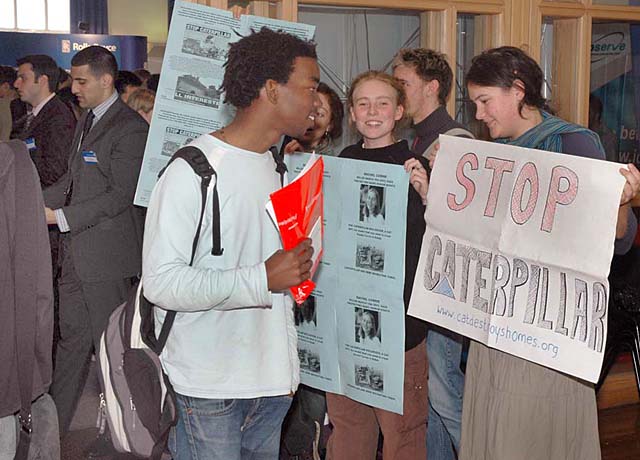 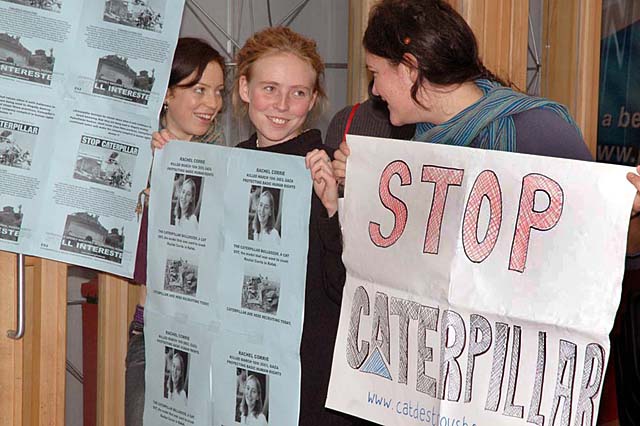 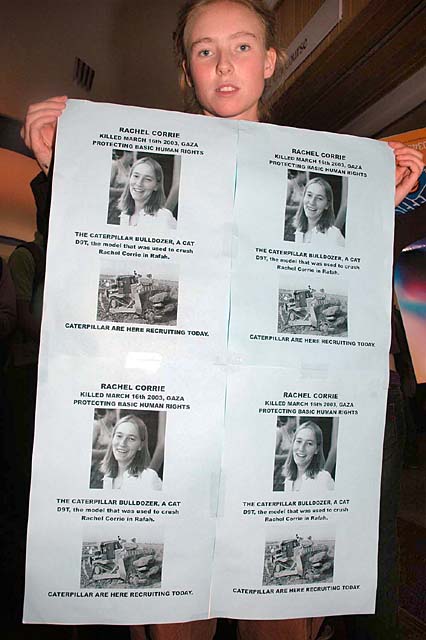 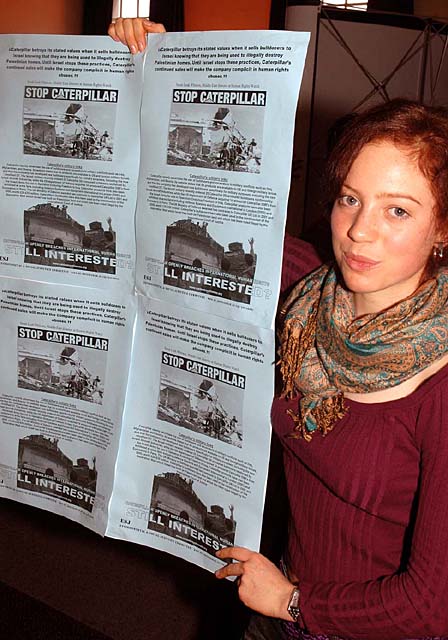 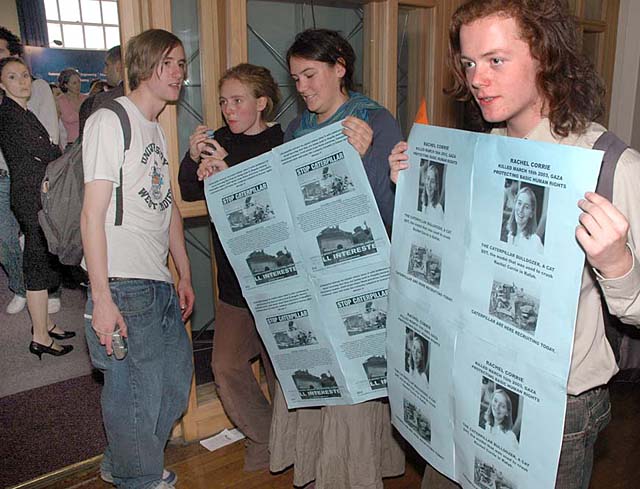 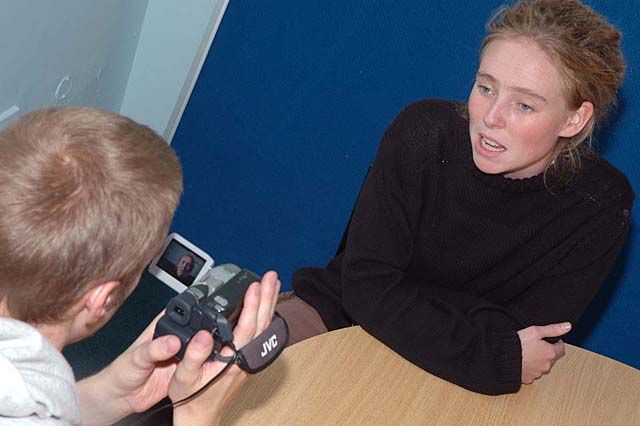 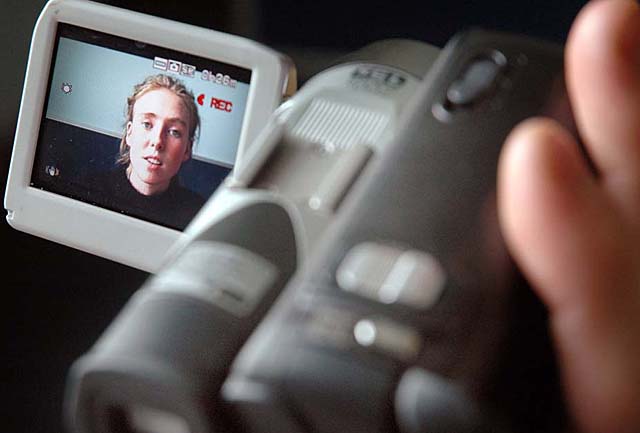 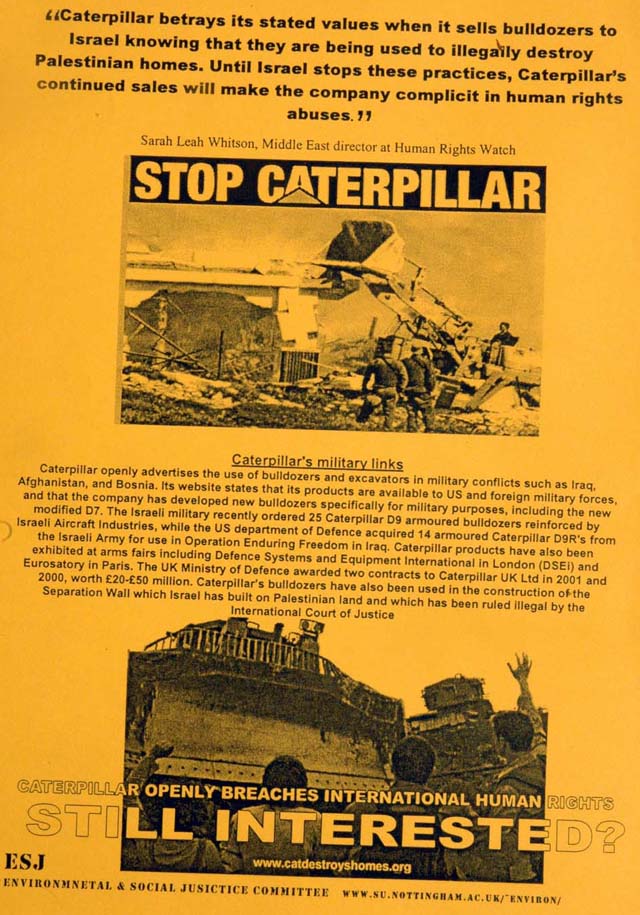 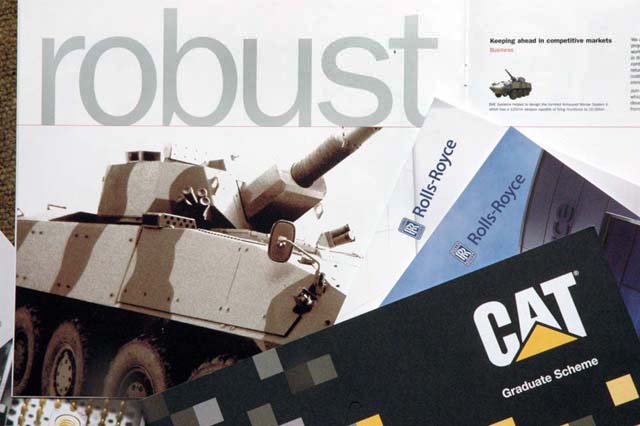 The article consists of interviews being taken at the fair:

'It is the AIESEC careersfair today and we're protesting against BAE systems how are an arms manufacturer who've got a reputation an a track record of corruption and bribary and selling weapons to oppressive regimes. They show no ethical awareness at all, even as far as weapons manufacturers go. It is important that potential employess who come from the university here know what the truth is about this company. The university should in theory promote ethical awareness.'

What has the response been from students?

'We've had a very positive response. We've actually had people come up to us and say: I'm very happy you do this protest.'

'The entire university is been taken over by these companies!' - student

'Amongst those companies are some with the worst human rights records, they sell arms, pollute the environment, abuse human rights and we think its really important that as a student peace group we put our own information to people to fill in the gaps and say: look, the people on the stalls aren't gonna tell you these things, but these companies do some pretty terrible things.'

Isn't your university run by companies like these anyway?

'Unfortunetelky more and more vice chancellors of the university are straight from business and don't have an academic background. thats reflecting on the university. Just little things like I can't actually sit in the cafe in the Students Union building unless I buy food there, because its franchised out. It's closing down the free space in the university and closing down on freedom of expression.'

How about the Student Peace Movement?

'Nottingham Student Peace Movement is really a pretty loose network of people, students mainly, who are concerned about issues such as anti-war and anti-armstrade but also anti-rascism: a whole range of issues. We get together and try to raise awareness and campaign.'

'Basically we got BAE here, which has a stall over there, and the problem is, they supply arms to countries with appalling human rights records, there basically supplying arms to sometimes either side of the conflicts. There are a lot of students here who are very vulnerable to the idea of big corporations, lots of money, lots of benefits and they dont know the facts behind the companies that they're joining. So we're here to hand out some flyers. What we want students to do is ask some questions, BAE needs to know that students know whats going on. That they're not just vulnerable to all the machinery that's on show. It's more about informing people than actually inflicting things, all you can do is educate them.'

'We're here to boycott Caterpiller from being in our student union!' - student

'I'm one of the university Chalpins, I'm paid by the church to work in the univeristy. Every Monday we organise a lunch and profits goes to Oxfam. This week we can't have our usual pitch, because of the careers fair and we moved to one side. The choice of career is very important for everybody and it's a matter of finding something that's gonna be good for you and for the wider picture. Some of the companies here, I wouldn't work for and they are companies I wouldn't encourage any of the students to work for. Caterpiller is a company that has been an issue for the Church of England recently. It is a company that produces contruction equipment, but it's recently been supplying armoured bulldozers to the Israeli army and others used in military situations. So there's been a move within the Church of England to de-invest its investments in Caterpillar recently.'

A response from the organisers

'The challenge that AIESEC has is that in a politcal process towards a better world I think there [are] different roles that organisations can play. There's political parties that say: this is our vieuw and that's what we're gonna strive for and then there are some organisations such as AIESEC that say: we want to be this space where people from those political parties can talk to each other. We have an ethical leadership seminar every summer and both Greenpeace and Shell are there and talk to each other. If AIESEC would have an agenda beforehand, it would be impossible to get these people in a room. That's what AIESEC is trying to do, to be the platform rather than the different forces going in and that's challenging. I feel the best way is to allow people to speak to companies and speak to partners, and that's what we do.'