American soldiers killed journalists at this hotel before. If the american army are in Baghdad why aren't they protecting the media, and how can this hotel be attacked so many times?

The Palestine Hotel, which houses many foreign journalists in Iraq, was hit by two rockets and one car bomb Monday, causing considerable damage to rooms, Iraqi police said.

Reuters cameraman Taras Protsyuk and Spanish cameraman José Couso of Telecinco were killed by US soldiers in April 2003. Three other journalists were wounded in the attack. 100 journalists were in the Palestine Hotel when american troops attacked the Hotel. 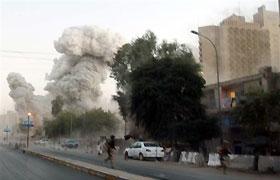 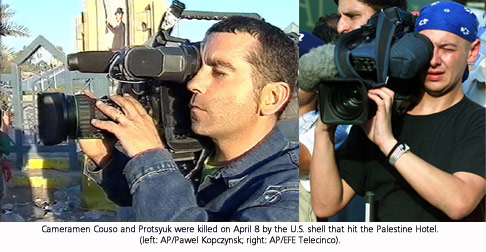 BAGHDAD, Iraq (AP) - Two enormous bombs, including a cement-mixing truck packed with explosives, blew up outside the Palestine Hotel - home to many foreign journalists - wounding at least six people and causing considerable damage. Arab satellite television networks said 11 people were killed in the vicinity of the bombs.

Associated Press Television News pictures showed the cement mixer exploding in a huge ball of flame and a cloud of smoke billowing into the central Baghdad sky.

Iraqi security officials said the explosions occurred two minutes apart, not long before Muslims marking the Islamic holy month of Ramadan were preparing to break their day-long fast. Shortly before the explosion a truck was seen coming under fire nearby, according to APTN.

Inside the hotel, light fixtures were blown out, pictures were blasted off the walls and windows were shattered.

An AP photographer at a checkpoint at the northwest corner of the hotel said at least three fellow photographers were injured and taken away by ambulance. Two TV personnel inside the hotel also sustained minor injuries.

The death toll of 11 was reported by the Qatari-based Al-Jazeera and the Dubai-based Al-Arabiya networks, quoting Iraqi security officials.

The attacks caused heavy damage to the south side of the 19-story hotel, forcing journalists, including those from AP, Fox News and the U.S. government-funded Alhurra TV station to take refuge in the corridor. Fox and Alhurra said their staff members were safe.

After the bombing, Iraqi forces opened up with heavy automatic weapons fire, apparently firing at random. There was no sign of a further assault on the hotel.

It did not appear that the car bombers managed to penetrate the high concrete blast walls around the Palestine Hotel, which was last hit by an insurgent rocket attack on Oct. 7, 2004.

APTN video taken immediately after the explosions from inside the hotel showed people evacuating through damaged hallways with panels from the ceilings and walls blown out in the stairwell. Debris from the blasts was seen on the floor of one empty room, where a television set was still turned on.

The hotel has been attacked several times since the war started in March 2003. On April 8, 2003 - the day before Saddam Hussein's regime fell - U.S. tank fire killed two TV cameramen - a Spaniard and a Ukrainian - at the hotel.

The nearby Firdous Square was the site of a statue of Saddam Hussein that was toppled as Baghdad fell to the U.S.-led coalition. Concrete barriers topped with barbed wire guard the Palestine and the nearby Sheraton, which is also home to foreigners.

http://www.rsf.org/rubrique.php3?id_rubrique=20
73 journalists and media assistants killed since the start of fighting in Iraq in March 2003, two still missing. Today's casualties will increase the number killed and injured who are in Iraq doing their job of reporting on the Iraqi war.