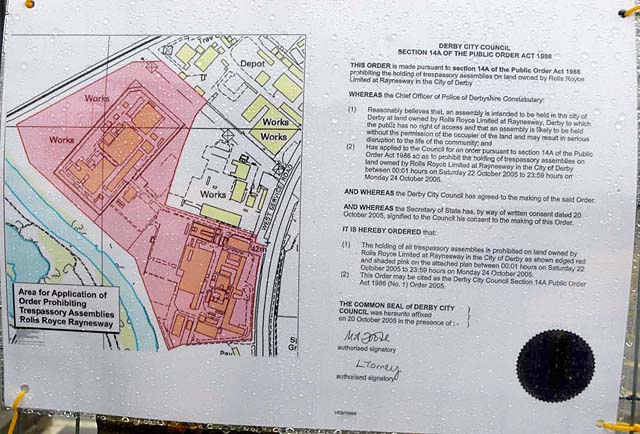 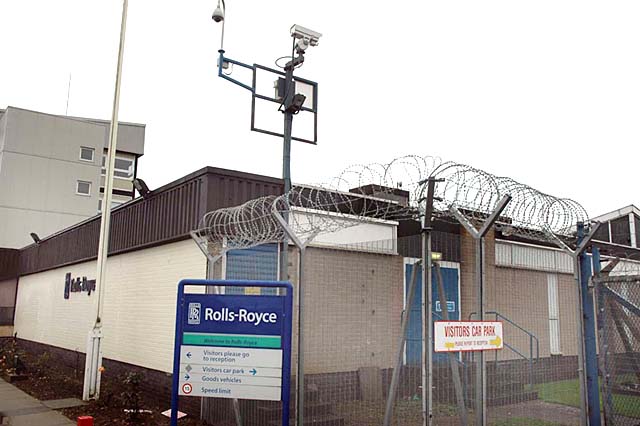 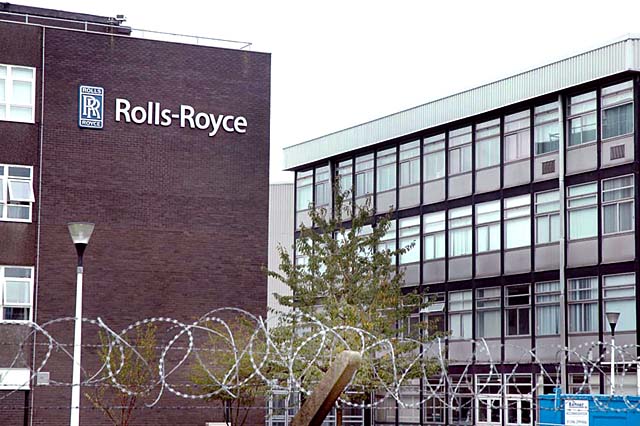 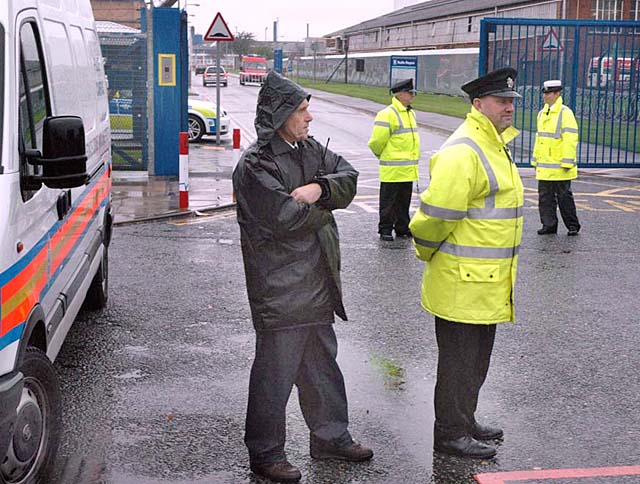 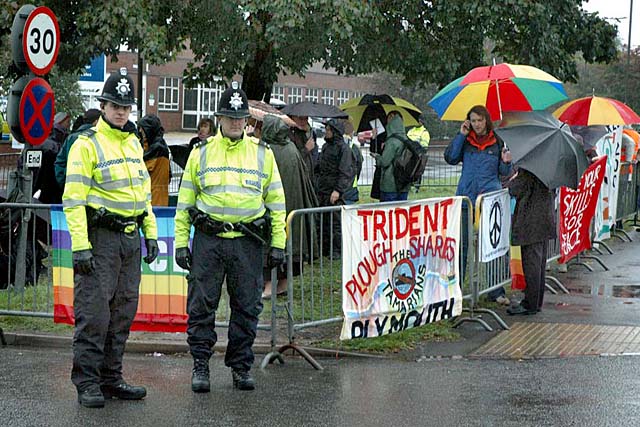 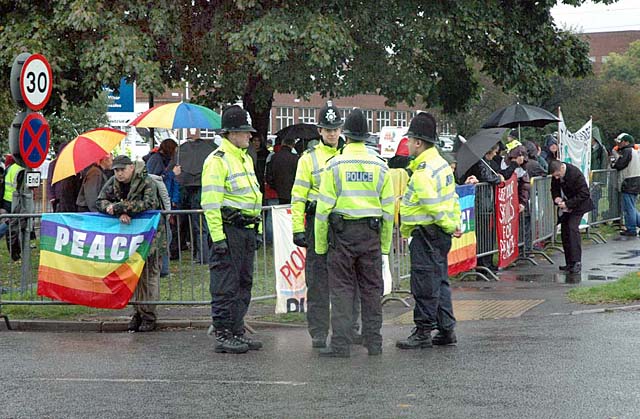 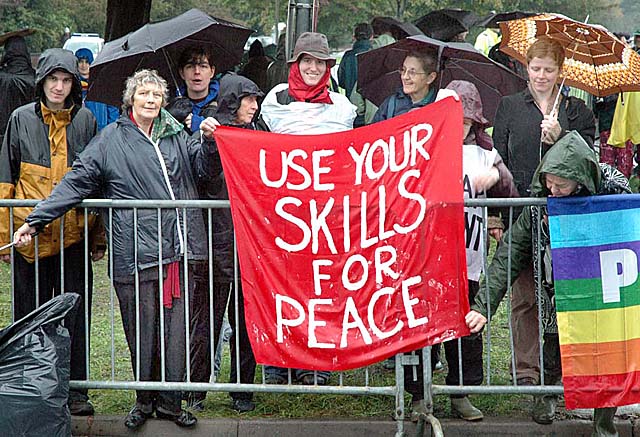 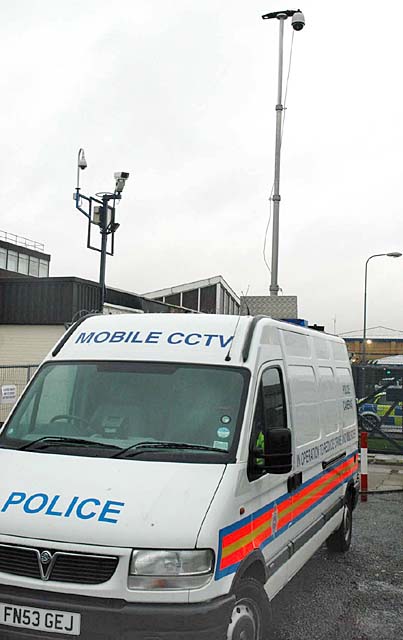 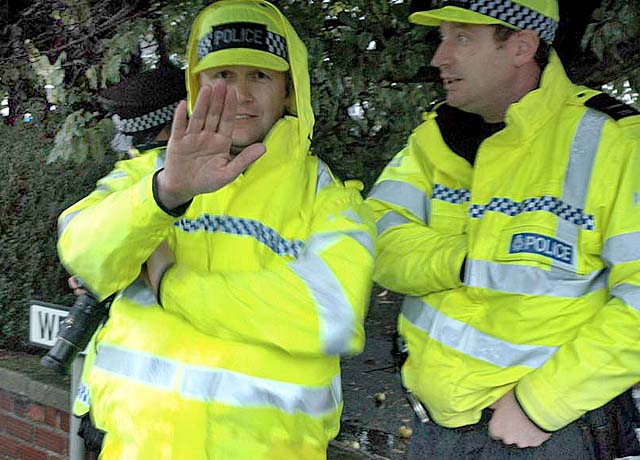 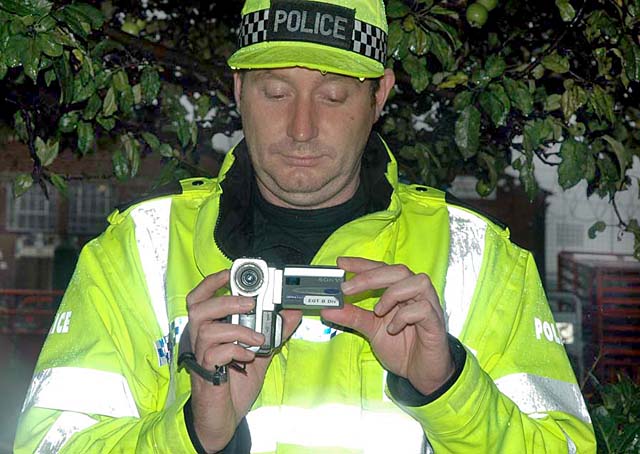 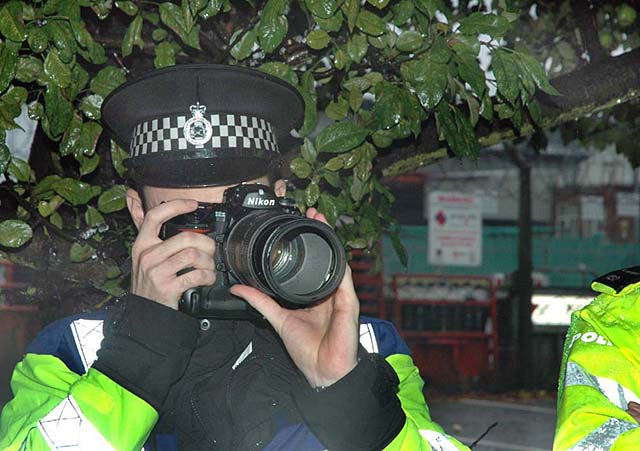 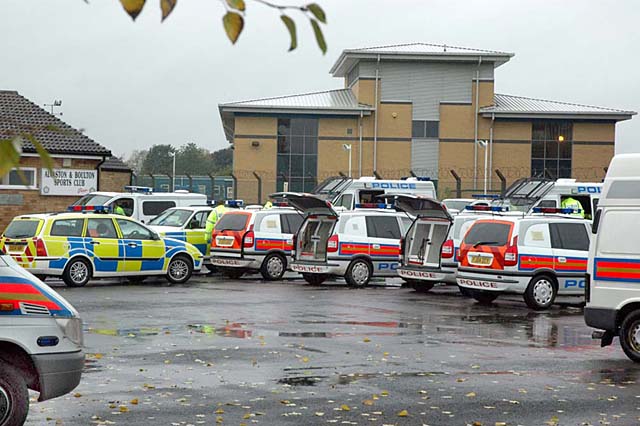 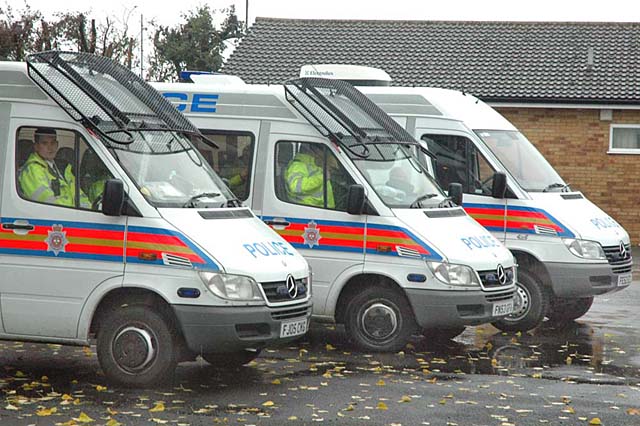 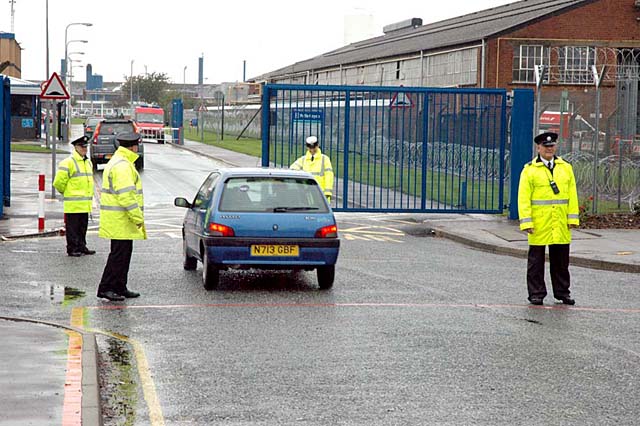 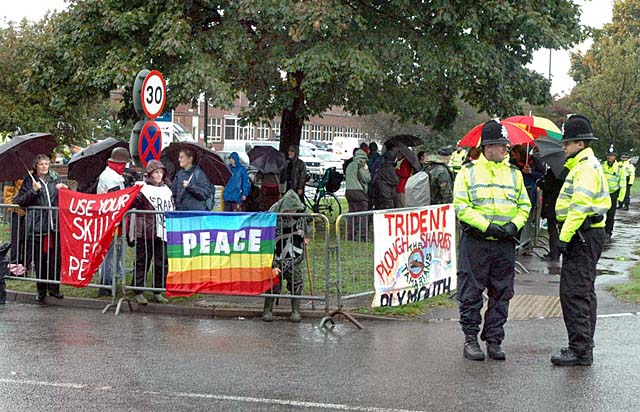 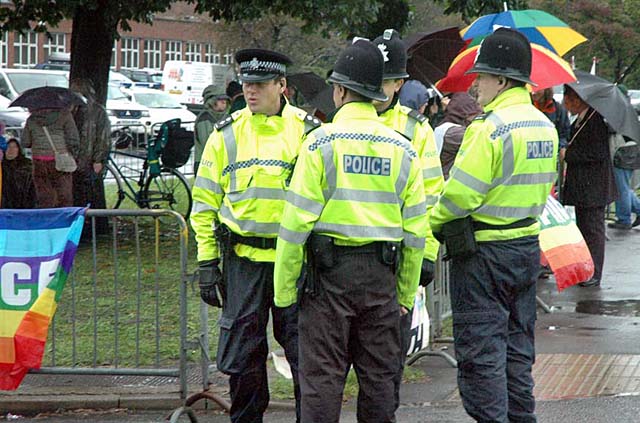 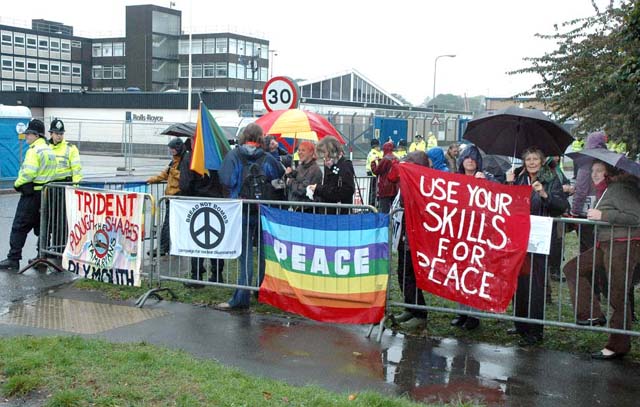 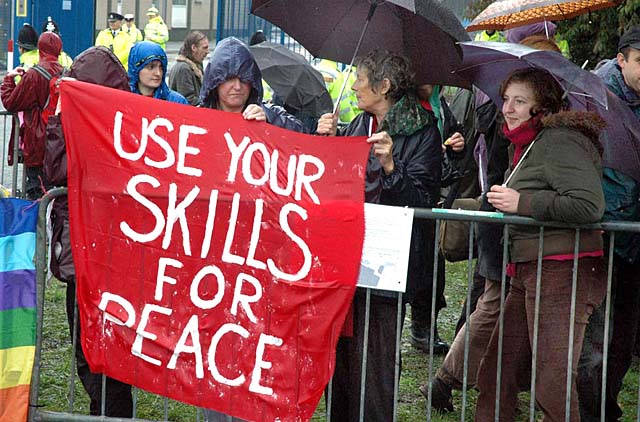 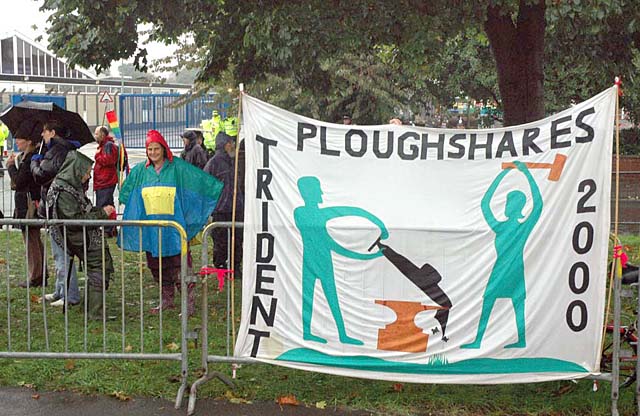 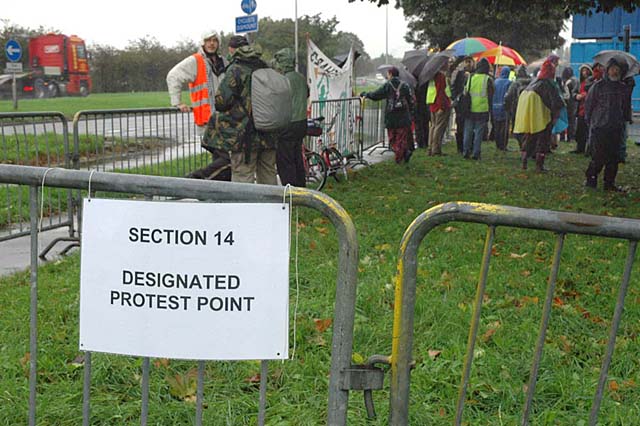 Derbyshire Police do it again: Back in March, they applied for Public Order Act 1986 Orders, that allowed them to limit, numbers, location and duration of protest against the G8 minsters meeting at a hotel, just north of Derby. Millions of pound spent to 'police' [oppress], a couple of hundred protesters, with 1600 policemen.


So they do it again, here is a copy of the order that they have obtained for this time.

You will see from these pictures that the size of the operation was again, well out of proportion to the numbers in attendance. There were many police on duty to enforce the order, at the main gate, together with a number of company security officers. Just down the road, there were a further 20-30 serials, and a few cars. Back at 'D' Division HQ in Derby City, there was yet another car park full on standby. All this in case the 30 or so present at the gate, 'Kicked-off'. Those present where confined in a small 'cattle pen'. on the grass verge, near the main gate. For thier own safety you understand, there being the A5111 ring road nearby. Well, that's what Inspector King was explaining on Radio Derby. Yea right!

The people of Derby being quite rich, well they must be, to be content to see all that council tax [their] money being spent.

Anyway, numbers turned out even though the weather was aweful. It rained, and then is rained further. Then it rained a bit more. Oh, did I mention it rained?

What is wrong with Rolls Royce Raynesway

Rolls Royce Raynesway makes the nuclear reactors which power Britains Illegal nuclear weapons system, Trident. Without this fuel, Trident submarines cannot move and so are unable to threaten the world.

* Trident is Britains current illegal nuclear weapons system. It consists of nuclear powered submarines which constantly prowl the worlds oceans, armed with nuclear warheads.
* Trident is illegal under international and British law because:
o Nuclear weapons are uncontrollable: both damaging future generations, killing civilians and military personnel alike, and contaminating the whole world, not just the areas in which they are used.
o The British governments use and threat of use of WMD is a war crime under the Geneva Conventions and under many other international laws.
o Our continued possession and recent threats to use Trident, encourage other countries such as North Korea, to evelop their own nuclear weapons. It also undermines the international treaties which are designed to prevent nuclear roliferation.

* Phase out all nuclear activities at the Raynesway plant within the next 5 years, moving into work which is sustainable and legal in the long term.
* Produce and make publicly available a comprehensive evacuation plan for people living and working within a two mile radius of the factory. This plan should be thoroughly tested and evaluated by the local council and emergency services.

Monday was the end to a period of activities to highlight these issues:

* Saturday 2pm, leafleting in Derby Town centre
* Saturday evening a Public Meeting
* Those taking part in the blockade of Rolls Royce Raynesway on Monday Morning engaged on Sunday afternoon with some training.
* Monday 9am demonstration outside Rolls Royce Raynesway
* Write to your mp asking them to stop breaking International law and get rid of their nuclear weapons.
* To find out more background check the TP website at:

The Students Union was full of businesses promoting their oppertunities for the under and post-graduates. People within the university informed the students attending the fair about some exhibitors: 'the problem is, they supply arms to countries with appalling human rights records'.

Arms manufacturers such as Caterpillar, BAE systems and Rolls Royce exhibiting at the fair were targeted because of their non-commitment to ethical responsiblity and the way in which they 'lie about the truth'.