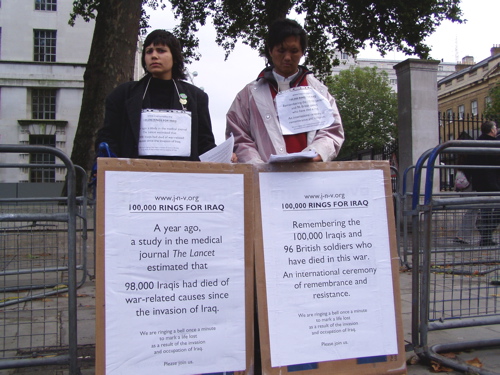 not the biggest of demos!! 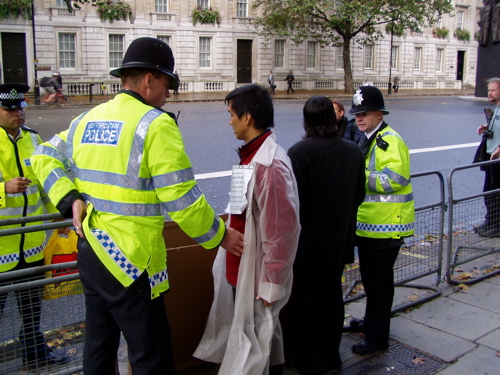 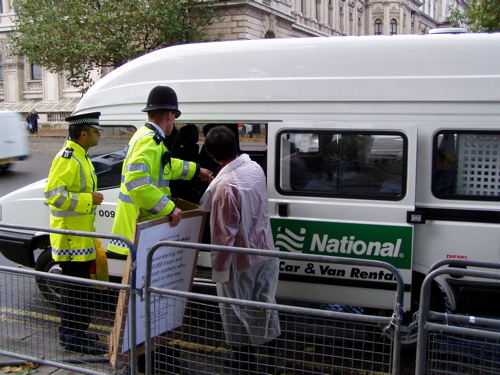 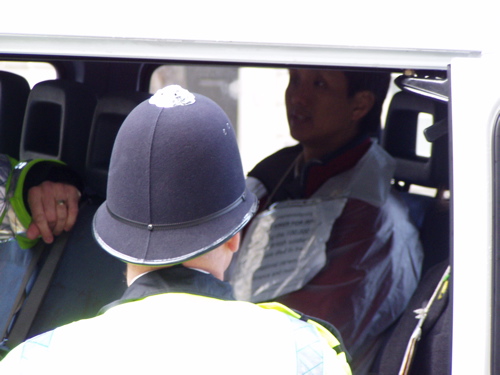 This morning at 9.40am, Milan Rai, and his colleague Maya Evans were arrested in Whitehall for organising and taking part in an illegal protest not authorised in advance by police. Their protest was part of a JNV-co-sponsored international project entitled '100,000 Rings for the people of Iraq'. A year ago, a study in the medical journal 'The Lancet' estimated that 98000 Iraqis had died of war-related causes since the invasion of Iraq. This international ceremony of remembrance and resistance marks each life lost with the ringing of a handbell.

So far they have rung a hand bell 250 times in the middle of Brighton, and on Monday they rang the bell another 250 times outside Northwood in North London, the military base commanding British forces in Iraq. The next bell-ringing is planned in Hastings this evening. Today's ceremony went ahead minus the handbells, because of police warnings of arrest, as the organisers didn't want the bells confiscated. Instead, they marked the moment by reading out the names of known dead in Iraq. More information about this international project is available on the website at www.j-n-v.org

The SOCA legislation was originally brought in to remove Brian Haw's one-man protest from Parliament Square, but because of the way the Law was framed, and a High Court challenge, his is now the ONLY protest that doesn't require prior authorisation by police in the area near Parliament Square covered by the act, as his protest was ongoing and the act could not be applied retrospectively.

Since its introduction on the 1st August this year, 25 people (according to police who compile the figures) have been arrested as participants in illegal demonstrations. One of today's additional arrests was for 'organising' an illegal protest, a much more serious misdemeanour with up to a year in prison as penalty. None of the cases have come to court yet, and it remains to be seen whether this law can be challenged using human rights and common law arguments.

For further information about the continuing struggle against this repressive act, please see www.parliament-square.org.uk

The two protestors were released this afternoon and bailed to return to Charing X police station on 10th November to face charges.