A weekend of activity against Rolls Royce in Derby started on Saturday, with a stall and protesters handing out leaflets to the general public with a surprisingly good reception from the Derby public. 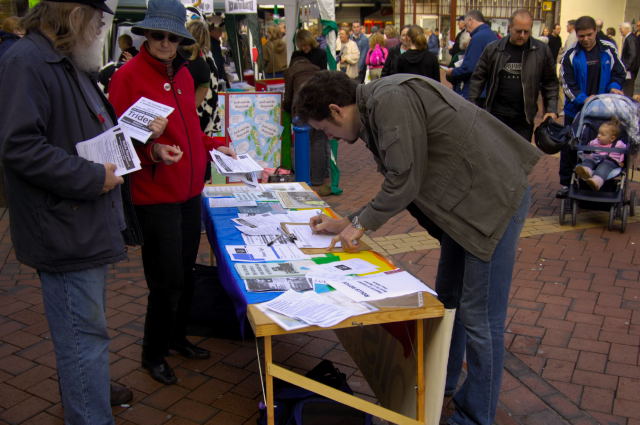 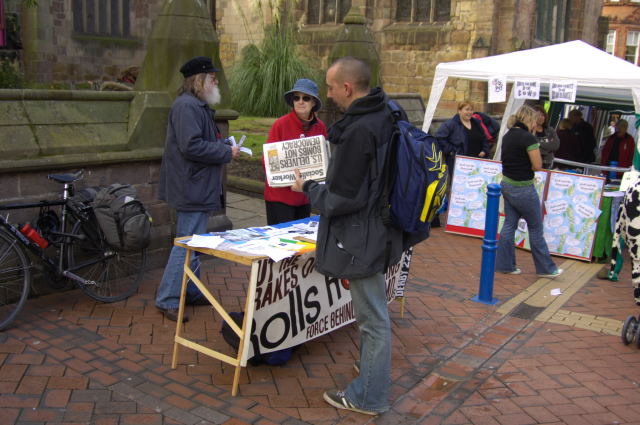 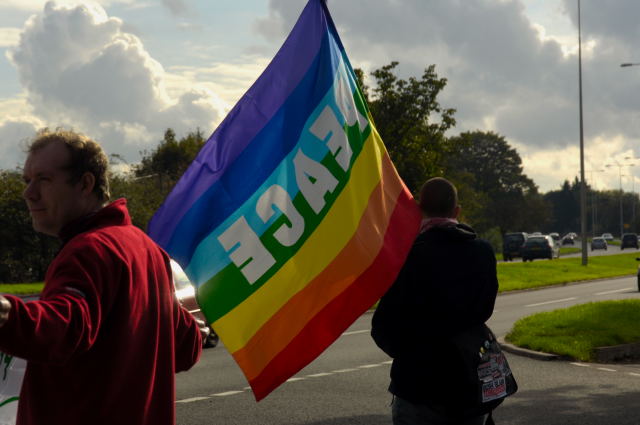 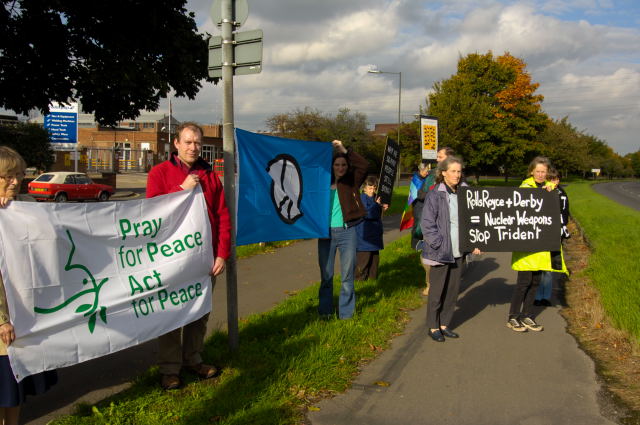 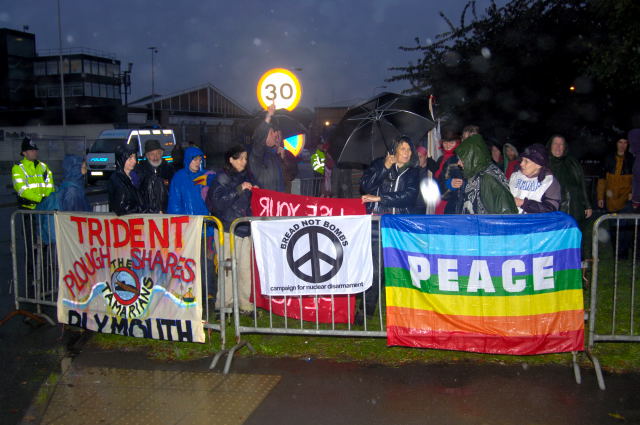 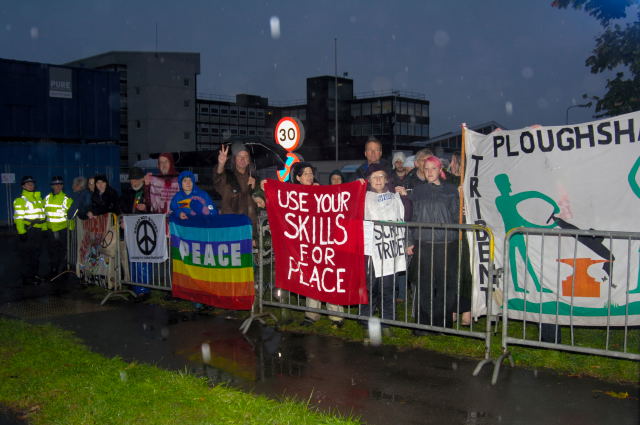 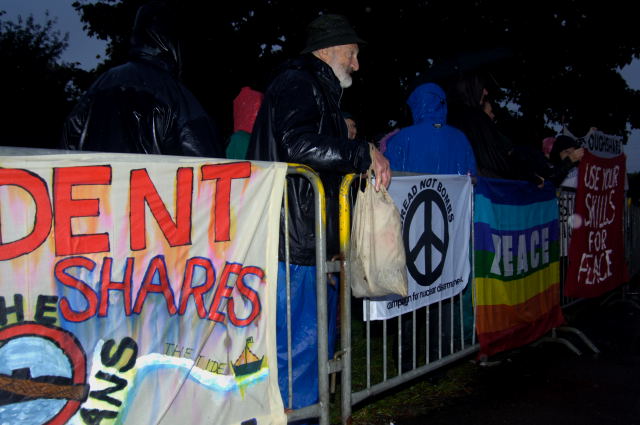 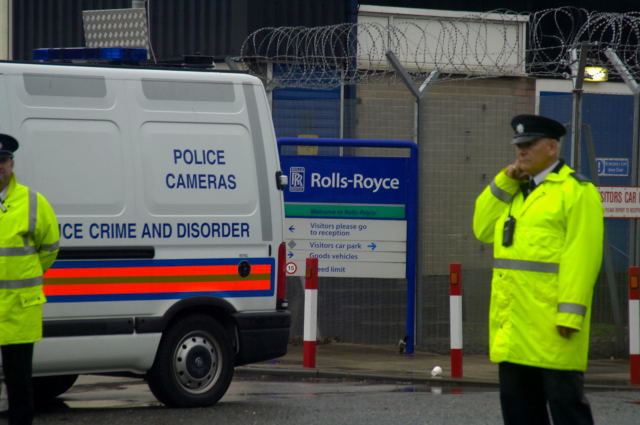 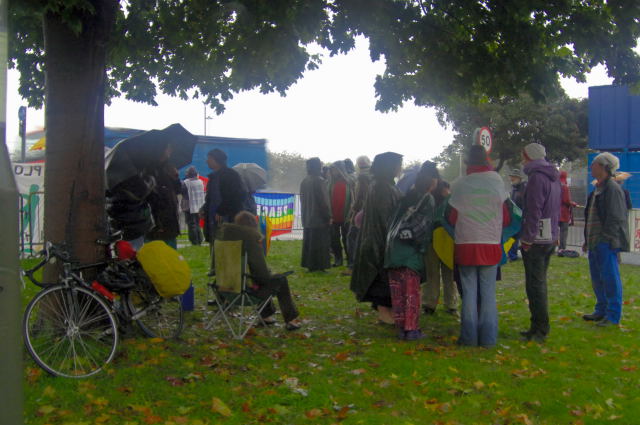 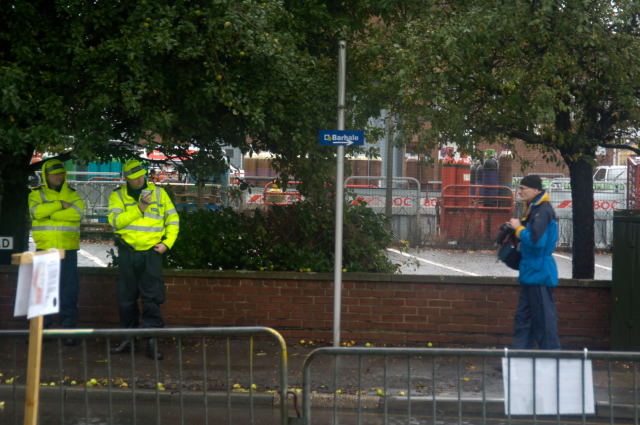 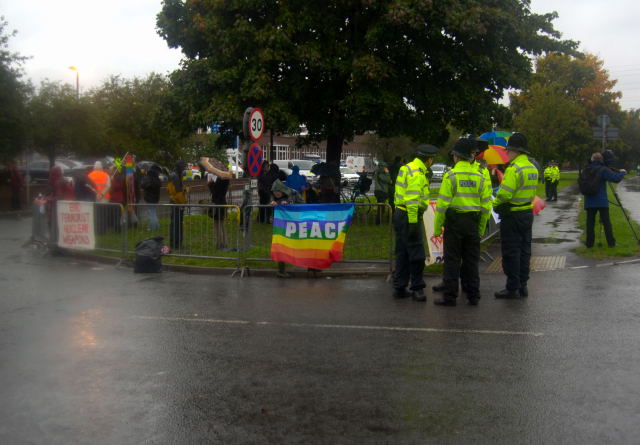 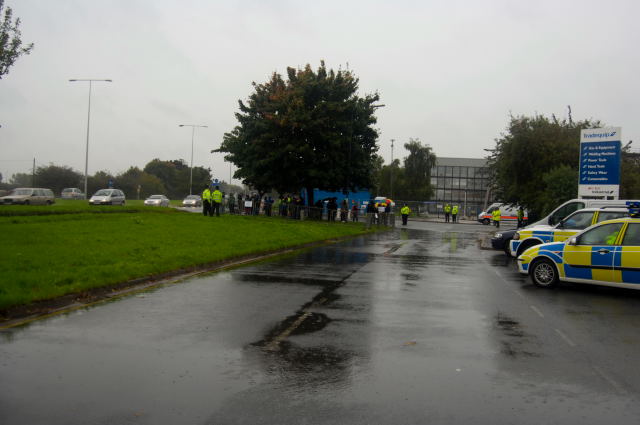 A lot were shocked to find that Rolls Royce’s Marine Division, on the Rainsway is actually illegal under international and British law as nuclear weapons can not distinguish between civilians and military populations due to the radiation being released, as it cannot be contained in space or time. Further the use of or the threat of use with weapons of mass destruction is a war crime under the Geneva Convention as well as other international laws. Which makes you wonder why this country is still producing the Trident nuclear submarines at the tax payer’s expense? There are also the potential local health hazards as they routinely release radiation and these were just some of the points raised by the protesters from East Midlands CND, Trident ploughshares and others that had travelled from as far north of Scotland and from Plymouth for the weekend of activity.

Sunday was a chance for people to train in Non violent direct action which people had to agree to before joining the Monday’s blockade and the Queens Hall on London Road that was used for meetings and accommodation was buzzing with enthusiasm, at around 2 pm some left to do a silent vigil outside Rolls Royce on the Rainsway, although this turned out to be quite noisy with all the motorists hooting their horns and waving in support. The police turned up with two vans of MOD police all dressed in civilian clothing (they were having a relaxed day) and the response was fast, well they were staying in the Stuart Hotel next to the Queens Hall so it was easy for the protesters to keep an eye on them! Despite the rapid turn out there was little presence by the police, even the FIT (Forward Intelligence Team) guy couldn’t be bothered to film the peace activists. Oh and did I say the weather was nice.

Monday morning and it was teaming it down with rain and the protest had started at 6.00 am with four protesters locking on to the gate of the main entrance according to the local radio station, but from what I heard from the protesters it was the access road they had the lock-on as the police had driven up to the van doors to stop all the protesters getting out , the four were quickly removed and arrested, some other vans were delayed from getting to the protest on time as it had been stopped and searched which brought the total number of arrests up to 10 for the day.

Derbyshire constabulary did the usual over the top response with numbers, the protest being limited to 50 but this didn’t apply to the police as we counted twenty vans plus cars and section 14 and 14a to put the limited number of protesters in a pen but at least this was outside the main entrance so the protesters could see the infamous company. Despite the rain refusing to let up the now reduced number of 40 protesters stuck it out until 11.00am which was the limit of the section 14a when they all departed.

Your conclusion regarding the legality of nuclear weapons is not strictly true. In fact, the 1968 Treaty on the Non-Proliferation of Nuclear Weapons expressly recognises the legal right of the five original nuclear powers to possess nuclear weapons, and this includes the UK.

Hmm.. Not quite Paul

It also commits those five powers to progressive disarmament; hardly compatible with the new generation of nukes UK plc has committed itself to...

The Derby Evening Telegraph reported the police presence as a joint Derbyshire/Staffordshire operation. It doesn't require much imagination to figure that the Staffs Environmental Protest Unit set up to police protests at Newchurch (and almost unemployed now) were giving the local plod loads of advice on the dozens of new Acts they could use to shut down peaceful protest.