We showed them who runs London 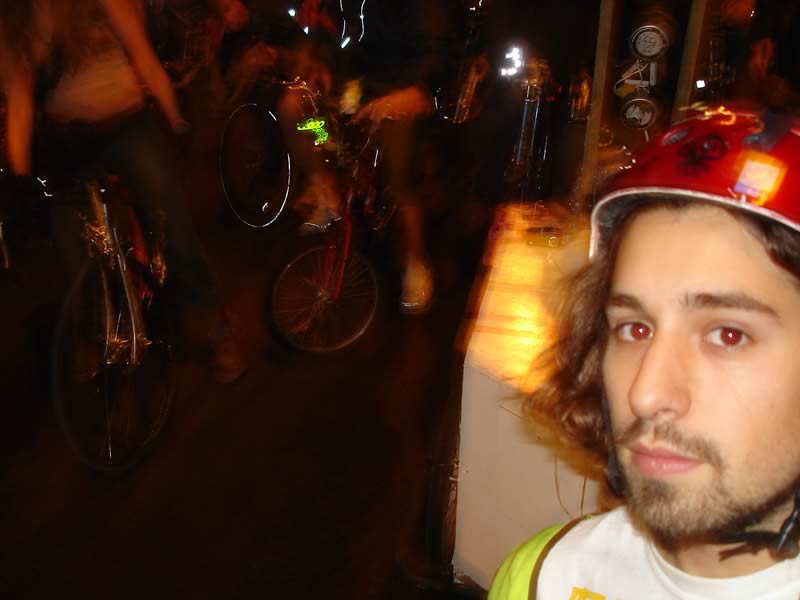 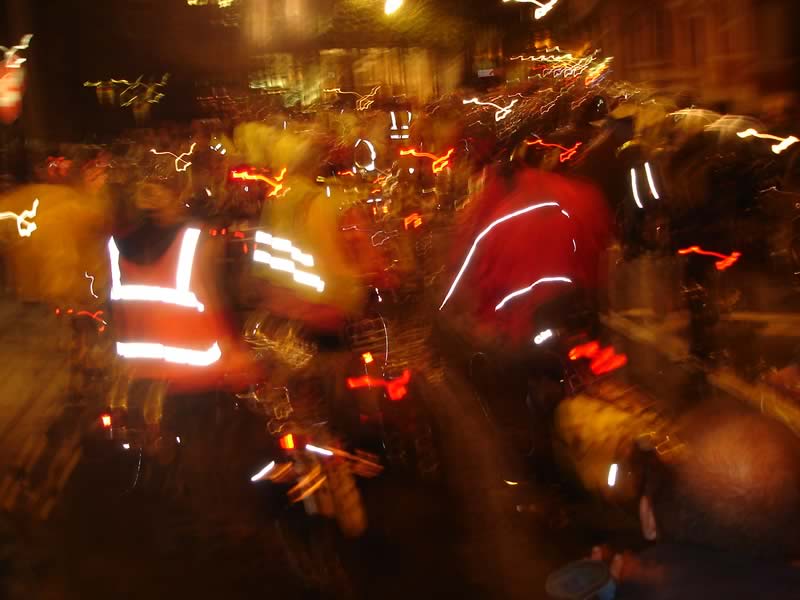 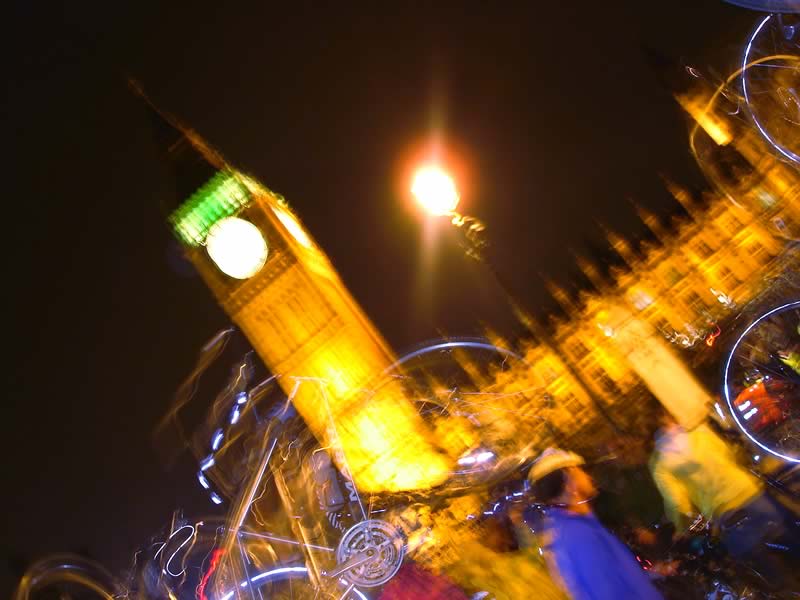 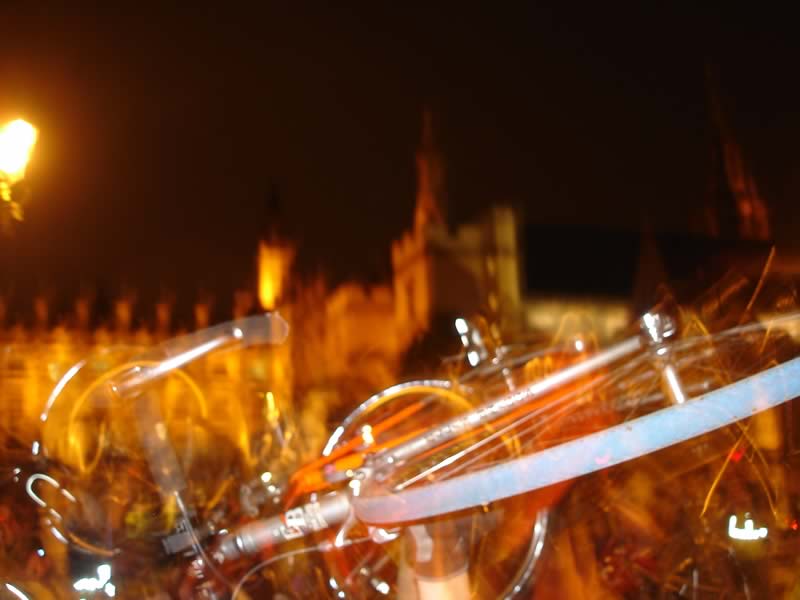 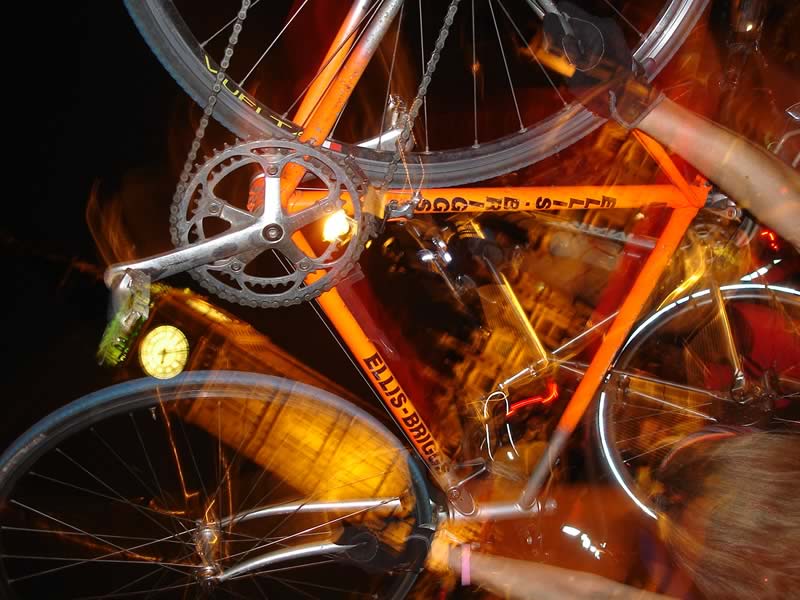 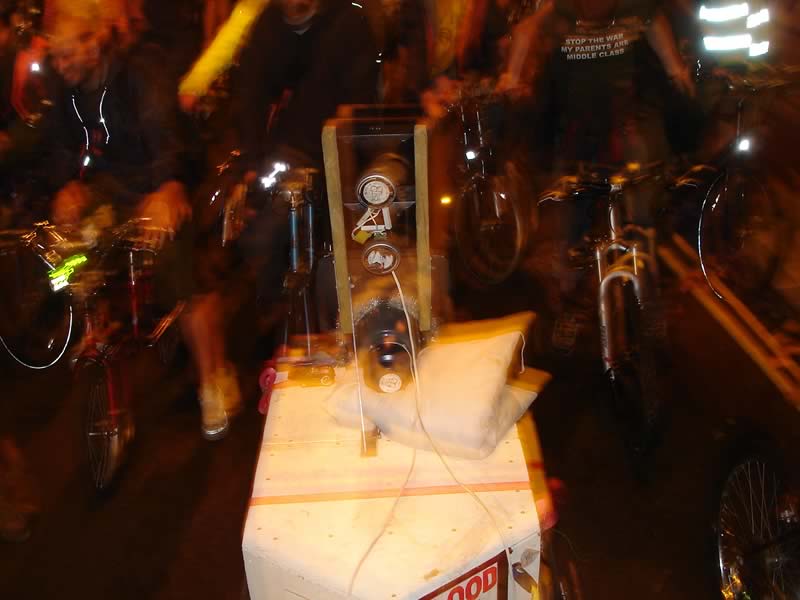 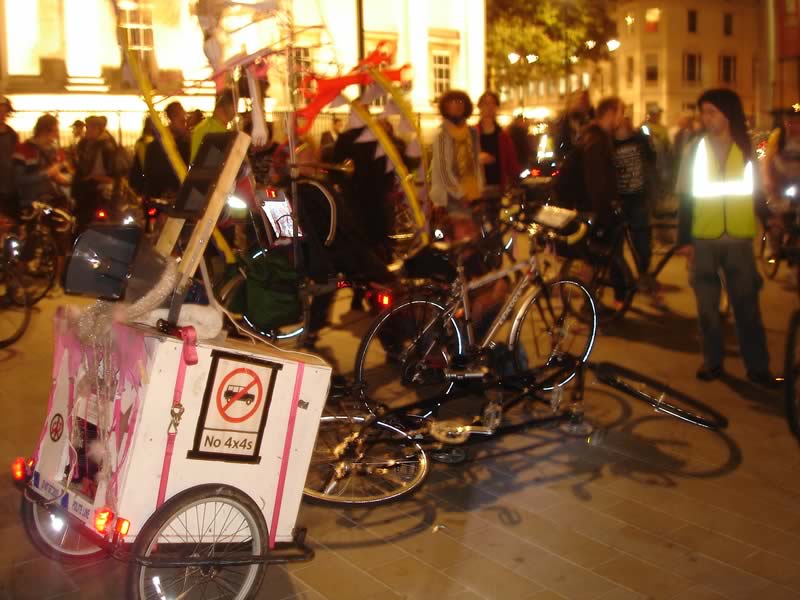 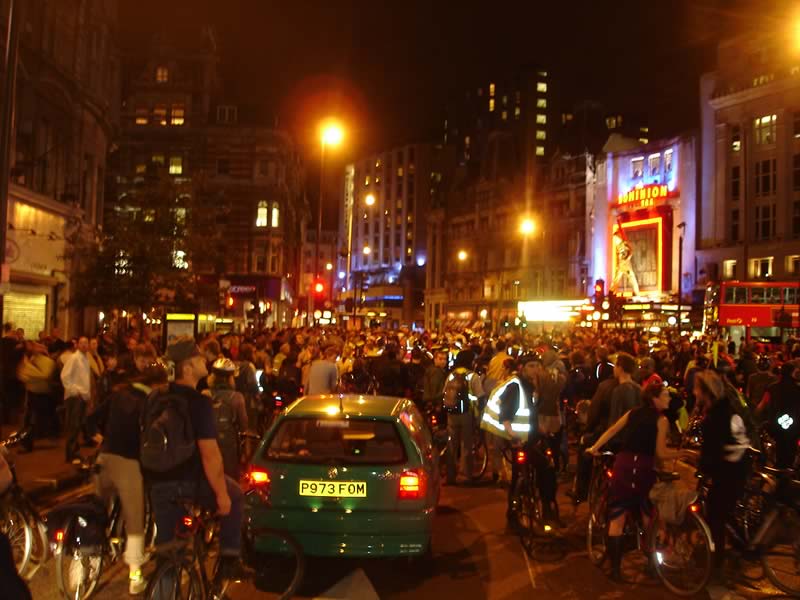 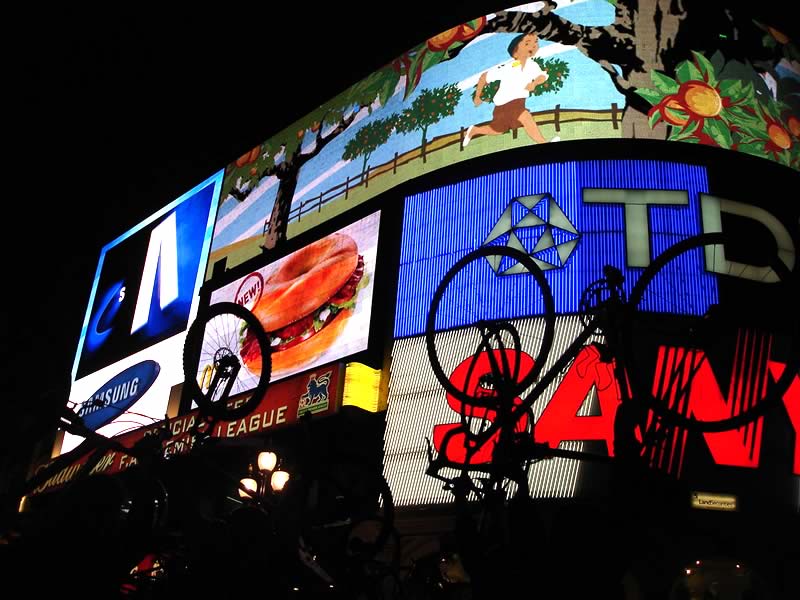 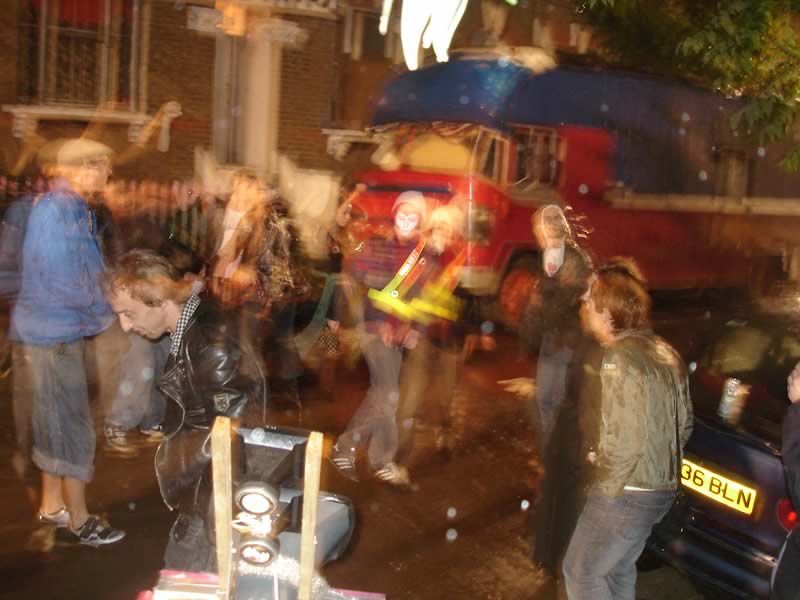 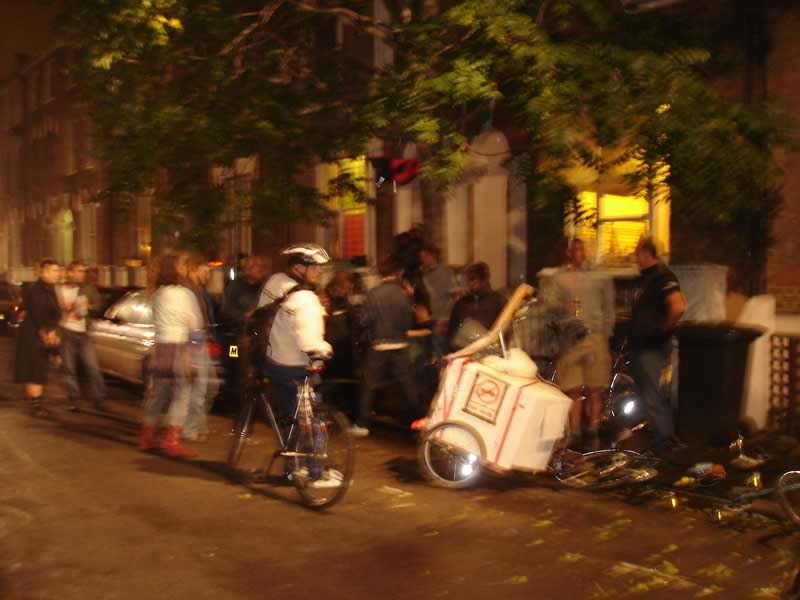 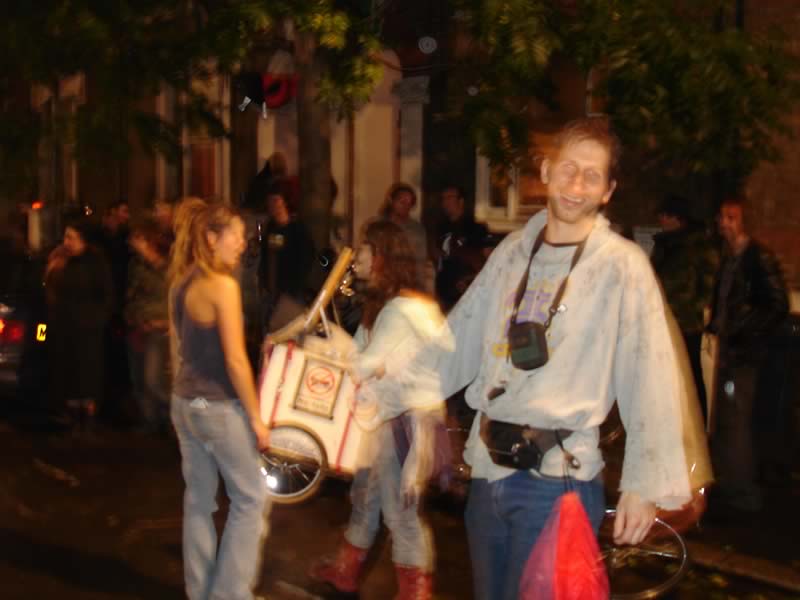 I am very proud of London right now.

The last Friday of every month fields Critical Mass, London’s weekly bike protest street party. We meet under Waterloo Bridge at 6pm, & ride at 7. At the last mass, end of September, after a week of protests against DSEI, the worlds biggest arms fair, held in the Docklands Excel centre, the police handed out letters explaining that because Critical Mass was an unlicensced protest, with no organiser & no official route, cyclists at the next Critical Mass would be facing arrest.

The Police should have known better.

Trying to ban Critical Mass was the catalyst for the biggest ride I have been on – around 1,000 cyclists swarming through the city, reclaiming the streets for those who live a sustainable lifestyle. An age range from 2 – 8X, with the cultural diversity you come to expect from a large event in London. Cyclists are already pissed off with the situation in London’s streets. Banning our biggest ride could only provoke the situation.

I was Djing on the ‘Pedals’ sound system – a 180 litre volume high-tech wooden loudspeaker cabinet towed behind a metallic green tandem. We towed pedals from London to Scotland in June 2005, part of the G8bikeride, a 60 strong cycle protest. The pilot sits at the front, the DJ at the back. I play tracks off my MP3 player, hyping the crowd with a microphone. Its an open mic giving us an interesting mix of protest & party announcements, points of view, rallying cries, songs & confused burbles. I play a mix of music - Drumnbass, Breakbeat, Breakcore, Blues, Jazz, Protest Tunes, RocknRoll, Heavy Metal, Funk, Reggae, Ragga, Dub, Hiphop, Folk, Psychadelic Trance, BreakCore. I try to ensure there’s something for everyone. Judging by yesterday’s smiling faces & bouncing front wheels, it went well.

We began the ride from under waterloo bridge, riding up to the Roundabout & crossing over the bridge. There were so many cyclists this month that it took about half an hour before we were all moving. By the time pedals sound system got onto the bridge, all 6 lanes were occupied by cyclists – We had taken Waterloo Bridge! We headed on to Buckingham Palace, and then Parliament Square. We managed to totally surround parliament square – showing solidarity with Brian Haw, and showing the government what happens when you try to make protesting or cycling illegal. This was a protest against attempts to control protesting, and we made certain our voices were heard. We stayed and partied for a bit, I played, ‘George Bush is an Islamic Fundamentalist’ by The Rub, who later got on the mic while the samba band where playing at Oxford Circus, just after we’d taken the junction of Charing Cross Road & Oxford Street.

A big shout to Samba band Rhythms of Resistance, who went a step further than attaching drums to bikes by riding & playing from cycle rickshaws! No protest is complete without loud pumping drum music, an audible call to the senses for everyne present.

After Picadilly Circus we moved down to Trafalgar Square where we had a a street party in the area between The National Gallery & Nelson’s column. This was the end of the ride for many. After half an hour we headed South towards Oval, to get pedals safely home. We stopped at St.Agnes Place on the way back, London’s biggest squatter community & the home of the world Rastafarian Headquarters. There were a few surprised people when we turned up pumping music, doors opened & people poured into the street, & as I started playing reggae, the beers & spliffs began to flow! The St.Agnes crew were well up for it, with about 40 people dancing in the street in the rain, supported by Fire Poy. When we had run pedal’s battery flat, we were invited inside for tea & food, & got to know the St.Agnes place crew. We ended the night with a party in a house 2 doors down, rockin to the Dub & Reggae sounds of Ras.Benji. I left to go home at 5.30am! Bigup Critical Mass! Ya Run London Town!!

Thanks for the report.

And u gotta love those fuzzy pics! The crowd shots of so many people makes me smile.

And nice one on the ‘Pedals’ PA - class.

Yes Hagop, and shouts to all the Critical Massive, especially G8 Bike riders... Couldn't be in town for this one but reading about it and seeing the pics is a happy consolation... Keep up the good work, hope they're all like this from now on... Did anyone actually get arrested?
B