This is an account of the talk given by Jan Benvie who spent 6 weeks in Iraq this summer with CPT (Christian Peacemakers) - 9 labelled photos are attached. 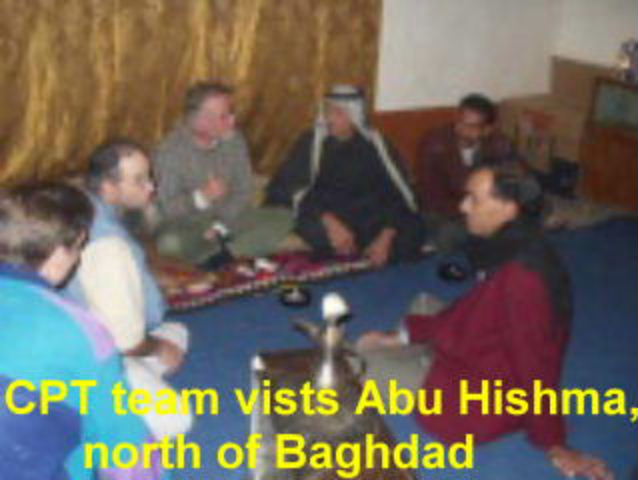 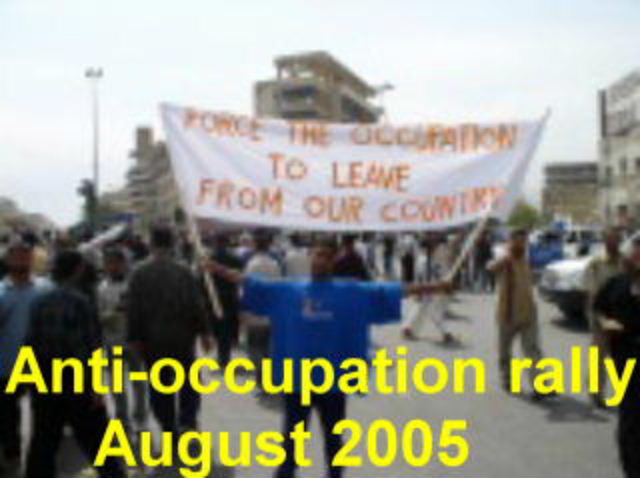 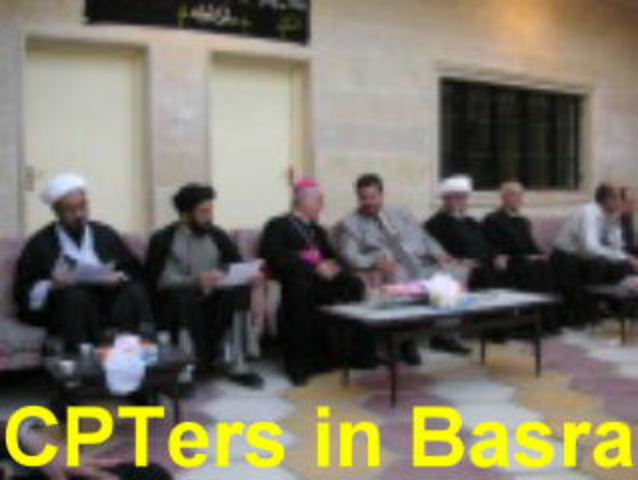 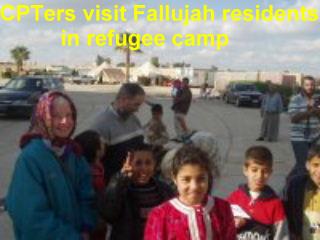 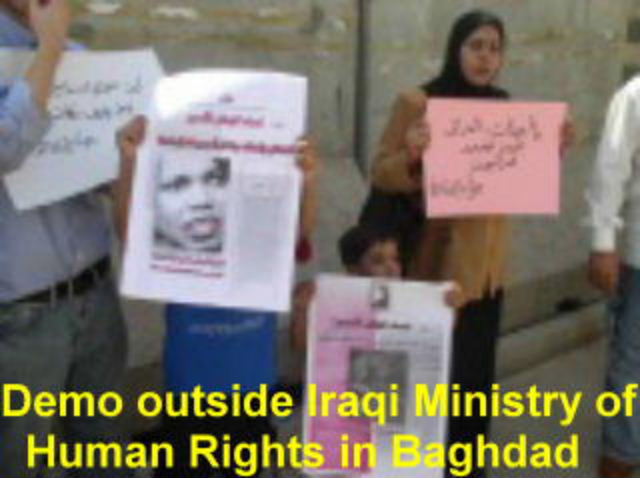 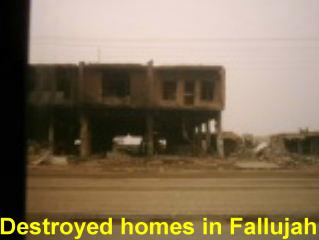 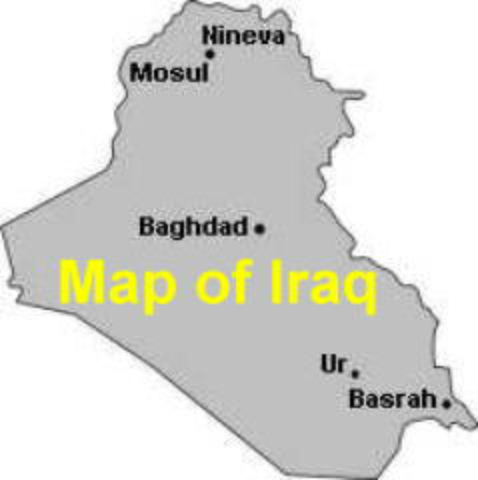 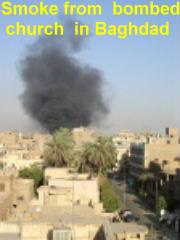 Jan Benvie, a schoolteacher from Fife, spent 5 and ½ weeks in Baghdad with a delegation from Christian Peacemakers (CPT) this summer. She gave a talk about her trip to a small group at St Francis Xavier’s Church Hall in Falkirk on Monday 31st October. Christian Peacemakers are an organisation composed of Quaker, Mennonite Churches and other Christians that support non-violence - their website is www.cpt.org - and their motto is "Getting In the Way.”


Jan spoke of the intensive training in non-violence, which CPT members undergo before their mission. They operate in small groups and liase with local peacemakers.
CPT operates in a number of countries including Colombia and Palestine. The idea of Christian Peacemakers is to get in the way of potentially dangerous confrontations and defuse them.

CPT has been in Iraq since October 2002 – before the current conflict began in March 2003.

CPT initiated a long-term presence in Iraq in October 2002, six months before the beginning of the U.S. led invasion in March of 2003. The primary focus of the team for eighteen months following the invasion was documenting and focusing attention on the issue of detainee abuses and basic legal and human rights being denied them. Issues related to detainees remain but the current focus of the team has expanded to include efforts to end occupation and militarisation of the country and to foster non-violent and just alternatives for a free and independent Iraq.


In the last days of Saddam Hussein the CPT groups had minders but people were quite happy to receive you in their homes. Now the local people ask you not to visit them in their homes because they are afraid that foreigners will be seen coming to see them so they go the CPT office instead.

In the 2 and ½ years since Bush declared major combat operations over things have gotten steadily worse. The thing, which surprised Jan, was that initially Iraqis who thought that things could get better welcomed the Americans. They looked forward to the reconstruction of their country and the restoration of basic services, the end of sanctions and so on. They now ask if the Americans were ever really serious about helping the Iraqi people.

Local people asked CPT to go back and tell their populations how bad things are. Jan spoke of the severe electricity shortages leading to a lack of air conditioning in summer temperatures of 120°F (49°C) – the heat is insufferable and it is virtually impossible to sleep at night without air conditioning. The CPT building did at least have some electricity but even then they had the inconvenience of getting up at 4 or 5 O’clock in the morning to switch on a generator. Many local people simply sleep out of doors, on rooftops etc to try and keep cool. What electricity there was had a habit of going off at really inconvenient times – when you wanted to cook or have a shower etc. Cooking was very trying as the temperature was already 45 or 50 degrees C and the heat of the oven made it hotter still.
The condition of the water is appalling and Jan had two bad stomach upsets when she was there. The CPT drank bottled water though this is not an option for most Iraqis. As well as poor quality the water pressure is often low and pumping it up to storage tanks can be a problem. Having a shower was very difficult and Jan said she wondered how families with small children coped. The sewage system is also dreadful with sewage in the streets of the huge Shia neighbourhood Sadr City. Imagine what the smell is like in the oven like temperatures. The stench from the waste bubbling up through cracked pipes is overwhelming yet children run around playing in it. The area in which the CPT mission is located is one of the more affluent parts of Baghdad yet even there things are bad.

During the 1991 Gulf war the allies bombed sewage and water treatment plants and electricity stations despite the prohibition of this by the Geneva Convention. After the war Saddam had the electricity fixed in 3 months while the current occupation hasn’t fixed it in two and a half years. The sanctions, which were imposed in August 1990, covered everything. They included not only arms but food, medicine, spare parts and tools were restricted or prevented form getting it so the infrastructure is in a dreadful state.

Jan is sad when people are killed but many of the so-called `civilian contractors` who are killed are in fact mercenaries. She spoke of a US military convoy with a taxi behind. The young American soldier was furiously waving the Iraqi taxi driver back but the taxi driver grinned and stayed close. Luckily nothing came of that particular incident. When convoys go through the streets the local people have to get out of the way. Parents are afraid to let their children go out and play.

Jan spoke about the bombings in Iraq and spoke of the fact that the so-called `insurgents` are largely home grown. The number of foreign fighters is actually low – maybe 6% or less. A lot of Iraqis believe that some of the bombings are carried out by the occupation – the case of the SAS men carrying explosives and dressed as Arabs in Basra springs to mind.

Jan spoke of the Palestinians in Iraq who are having hard time at present. As soon as Saddam fell there was a big backlash against the Palestinians. They now have to carry passes and they said they would rather be caught without papers than have to show a Palestinian identity card.

The UN is confined to the Green Zone and employs Iraqis to act for them. The Red Cross in Iraq are totally overwhelmed and many Iraqis don’t know were their loved ones are after arrest.

The Americans initially promised to destroy Saddam’s Abu Ghraib prison but it is still going. Many people are still being held there without charge.


Iraqi are very afraid of the country drifting into civil war, for centuries Sunni, Shia, Turkmen etc have lived side by side and intermarried.

The Americans and the widely supported Sadr organisation (formed by young cleric Moqtada Al Sadr) hate each other.

Jan spoke to refugees from cities, which have been bombed by Americans, and the bombing raids are very indiscriminate. The city of Fallujah for example has hardly a building left standing.

Iraq has an unemployment rate of over 40% yet amazingly immigrant workers are being brought into the country from countries like Nepal and Bangladesh.

Paul made the point that with all the oil wealth in Iraq then reconstruction should be no problem. The local people could do the reconstruction work them selves but they are prevented from doing so by the occupation. Also there are actually queues for petrol in Iraq! The queues can be miles long – Iraq has what is believed to be the second largest oil reserves in the world but the Iraqis have no control over it.


The shops are poorly stocked and hospitals are desperately short of medicine.

The Green Zone (called the `International` Zone) by the American State department website is surrounded by a ring of security which involves going through around 6 checkpoints to get inside. At each checkpoint you need two forms of photographic ID and you are not allowed to bring in cameras or mobiles phones. You need a good reason for going inside the Green Zone. The US Embassy, UK Consulate and other important buildings are housed inside the Green Zone.

Saddam’s palaces have been taken over by the occupation and the local people resent this. This is true even of these who had been imprisoned and tortured by Saddam.

The conditions in the hospital in Sadr City, which has a population of some 2 million, are ghastly with a shortage of basic equipment and medicines. Many of the drugs being imported into Iraq are very cheap generic drugs, which are below full strength. Water borne diseases like typhoid are rife and hepatitis is at epidemic proportions.
Yet there was a time some 15 or 20 years ago people used to go from all over the Middle East to Iraq for treatment but no longer.

Someone made the point about how apologists for the invasion came out with things like what Labour MP Ann Clwyd says, “Things get better day by day.” This is because they are shown what they are supposed to see but even these people are falling silent as the lies and myths of the benevolent occupation gradually fall apart.

Jan said that the TV coverage bore little or no resemblance to what she saw there. In Fallujah for instance hardly a single building is left standing.

The destruction of historic sites like Babylon was mentioned – the occupying forces simply don’t care about Iraq’s cultural heritage Iraqis are angry at the ransacking of their museums.

Many US military bases are being built – local people have to some extent accepted that the Americans are there to stay but ask why the troops cannot stay in their barracks.

9 photos (taken from the Christian Peacemaker Website) are attached.