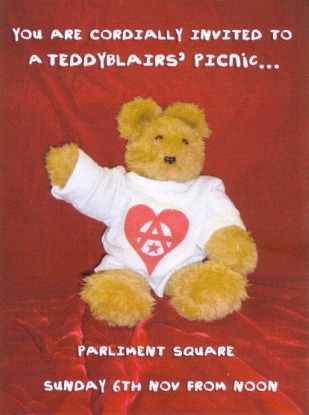 The Federation of Teddy Protesters are becoming increasingly unhappy with the way their furless friends, the Parliament Square Picnickers have been harassed by the Police since the introduction of the Serious and Organised Crime and Police Act (2005) this year. This draconian law forbids demonstrations within 1km of parliament without the prior ‘authorisation’ of the Police. To date we believe that they have made at least 19 arrests of people aged 17 to 70, and possibly more.

For Winnie the Pooh's sake, at least six of those arrested were friends of ours the Parliament Square Picnickers! Their crime? Simply daring to eat cakes with ‘Freedom to Protest’ and ‘Save our Speech’ written on them in icing, for wearing t-shirts with slogans such as ‘Make Trade Fair’ and ‘Peaceful protest is an essential part of democracy’, for discussing the important issues of the day at their ‘people’s commons’, for clapping in a provocative manner and generally drinking tea without permission. Even T-shirts and art supplies have been seized as evidence.

Being inanimate objects and therefore not subject to this outrageously undemocratic legislation the Federation of Teddy Protesters (FTP, in solidarity with the fledgling civil rights movement here in the UK) have decided to support their comrades by staging a ‘Teddyblairs Picnic’ this Sunday at noon in Parliament Square. Therefore we call on all free thinking Teddies, and their human buddies who value free speech, and the right to drink any beverage without authorisation in front of the 'Mother of All Parliaments' to join us in tea, cakes, singing, party games and silly peaceful protest.