On Wednesday the Fascist BNP called a national mobilization in support of their leader Nick Griffin and his rather embarrassing sidekick Mark Collett. Mark you may remember was the loser who allowed himself to be filmed saying all kinds of pro-Hitler shite by a BBC reporter. Both of them are up in court for incitement to racial hatred. There would have been a third defendant had former BNP leader John Tyndall not croaked in the month of July. This was a terrible shame as Tyndall was one of the more entertaining (not to mention incompetent) self-proclaimed neo-Nazi leaders.

Unite against Fascism and Yorkshire and Humber TUC called a counter demo outside the court. 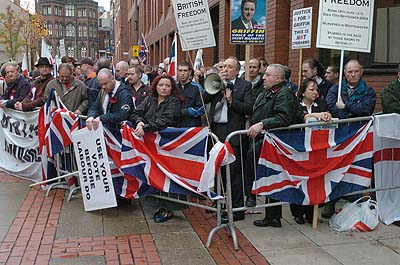 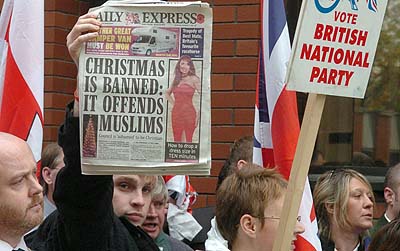 Egged on as always by hysterical racist tabloid bollocks. 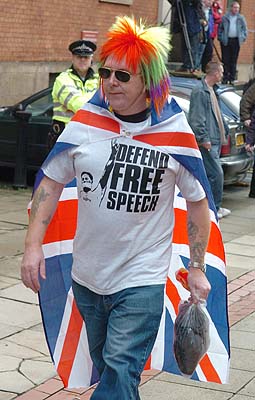 Always ready to reinvent themselves and try new strategies. 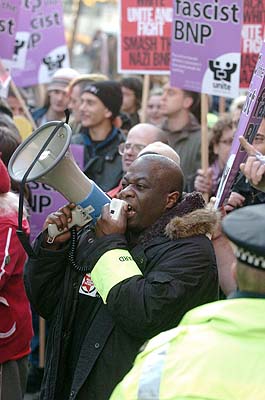 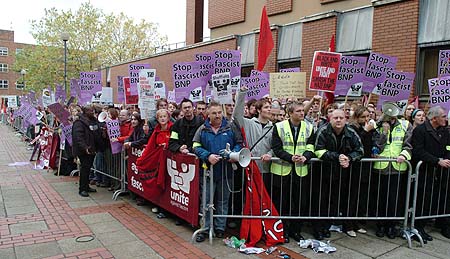 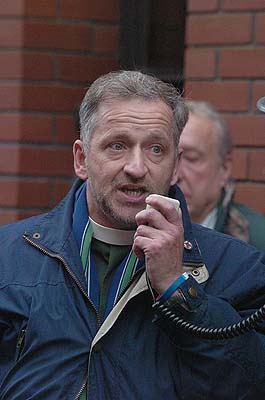 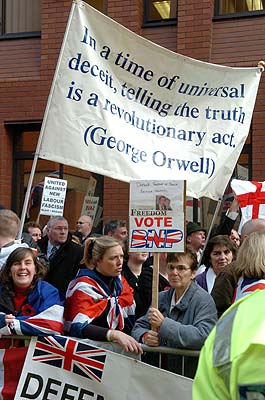 Yes thats the same George Orwell who went to Spain to kill fascists. 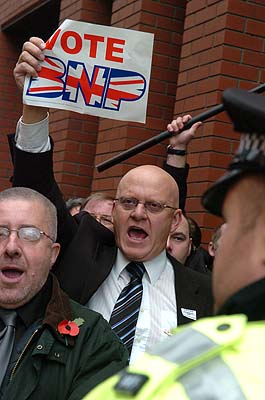 Uncle Fester from the Adams Family joins the protest. 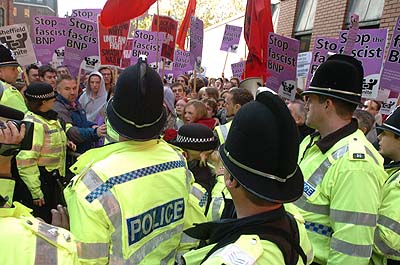 The cops move in as Griffin arrives. 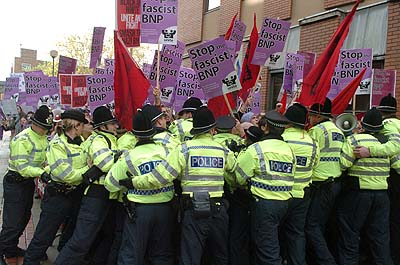 Police protecting the Nazis. No arrests. 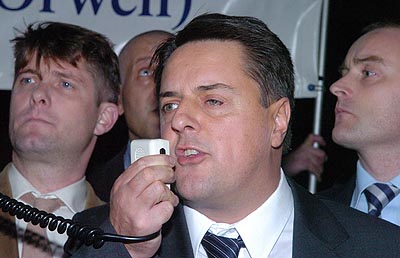 It was the biggest BNP demo that I have seen, certainly more than the 37 fuckwits that picketed the NUJ a while ago. However the 350 claimed by the BNP is bollocks. It was half that size and outnumbered by the counter demo by more than four to one.

Griffin and Collett’s grand entrance was somewhat spoiled by them and their minders running for cover under a hail of flower and eggs as they reached the court. After this the day became an elongated slanging match between the two sides with the BNP demonstrating their political weaknesses on more than one occasion. Recently they have tried to reinvent themselves as some kind of libertarian free speech campaigners. A notion that looked steadily more ridiculous as they screamed that their opponents would all be banged up or deported when they came to power. A banner with a quote by George Orwell looked particularly daft when you consider that Orwell was an antifascist who fought Franco in the Spanish civil war.

The most amusing character served up by the master race was a man in a dog collar claiming to be some kind of clergyman. He entertained the waiting journos with some of the most bizarre semi religious political ranting ever heard. Whether he was a real priest or some nutter who has bought his qualifications and outfit off the internet was unclear. He refused to say what denomination if any he was of even where he preached. If he was for real he would not be the first so called Christian to wave a fascist flag.

At the end of the day Griffin emerged to crap on about his struggle for liberty to incite hate against minorities. Unfortunately for most he is in a win-win situation. If he is found not guilty he will be given a license to say what he likes about ethnic minorities and other religions. If he loses he will get the credibility and martyrdom he craves. I suppose he could end up sharing a cell with Abu Hamsa? That would be poetic justice…..