bears, but not how you know them! 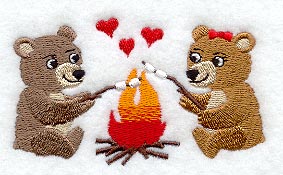 REPORT ON ABUSE OF THINGS THAT WE DONT LIKE , NOOO! :

Bears have been found to be making a hazard of themselves in manchester city centre.
Since the Ming scandal broke out, bears from all around the country have been joining together to protest against Ming. One bear made a statement to BBC news reporters saying "bastard". the bear then went on to say, "Ming is a bastard and i dont agree with her speaking for us bears, innit. shes a fuckin nobber. we like circus's y'know, we have all been auditioning for bloody ages, she gets in, and then complains!?, what the fuck yeah?" the bear then ripped of the bbc reporters face and poo'd on his dead body. the other bears then engaged in some primitive tribal bear dance around the body, all shouting and singing.
some accuse the bears of being 'primitivists', and against technology. But then a bear was seen making a call on his new nokia phone.

The latest bear orientated protest was lighting fires, singing songs, and cooking marshmallows. (the picture illustrates what we think happened but in no way implies that bears can actually create hearts from fires, if they did they would probably be burnt at the stake, at leats i would, stupid heart making bears)

so there you have it, conclusive evidence that bears are...well...stupid and stuff.