There is widespread unease among Government backbenchers and civil libertarians. These orders will be imposed for no crime, control people and prevent people from speaking out or participating in their normal day-to-day activities. The backbench committee and Attorney-General were at loggerheads over issues of no principle in the laws. 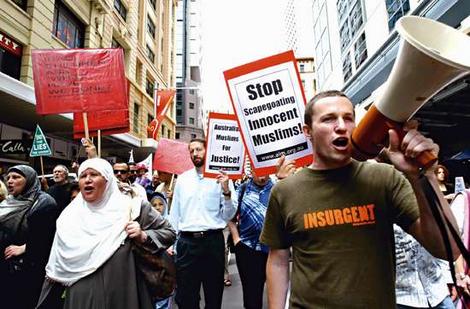 These orders will be imposed for no crime

AUSTRALIA: Thousands of people protested their concerns yesterday that new draconian Anti-Terror laws were an attack on dissent, not fit for a dog and any new sedition laws would strangle freedom of speech and target innocent people.

Under the provisions, jail terms could be imposed on people seen to oppose violence, protest illegal and degrading wars, or incite ill will against Australia's involvement in criminal activities like the war on Iraq, where over 100,000 innocent men, women and children were killed, maimed or tortured.

An estimated 2000 protesters took to Sydney's streets yesterday to express their concerns about the anti-liberty laws.

Similar rallies were held in capital cities across the country as civil rights groups and Islamic leaders gathered to protest against the legislation.

The whole anti-liberty package should be dumped as another HoWARd crime against humanity. The anti-terrorism legislation, which will give police and intelligence authorities unprecedented powers, was introduced into Parliament last week.

There is widespread unease among Government backbenchers and civil libertarians. These orders will be imposed for no crime, control people and prevent people from speaking out or participating in their normal day-to-day activities. The backbench committee and Attorney-General were at loggerheads over issues of no principle in the laws.

The state premiers ought to be ashamed of themselves for not standing up for their communities in that these laws would breach any general standards and common law principals. NSW Premier Morris Iema is well aware that at present his government is being sued over the Community Protection Act 1994, a law that also imposed preventive detention so he knows that legislation proposed by the hoWARd government is already 'invalid'.

When hoWARd played his terror card last week the only way he could continue to validate the serious alarm and affront he imposed on the nation was to have frontline intelligence officers and pro-government media giants prop up to argue that the government had breached the security act.

But this was only to help cover up hoWARd's lie. Then low and behold a former Australian Security Intelligence Service agent Warren Reed said state-based police and intelligence officers involved in covert surveillance of suspected terrorists feared their targets would now go underground.

Reed played right into hoWARd's hands 'or the other way around more like it' appearing to validate the notion that Australia had faced a 'real threat' when hoWARd announce the fear.

But this was just more propaganda and their fears that the 'targets' would now go underground was like 'phantom of the opera', but in a long, long list of lies this was just another blatant lie by the hoWARd dictatorship because no one is able to get to the truth, because it's another secret.

The propaganda message from inside the intelligence system, especially on the front line at the state level, is that hoWARd's terror scare had some validity.

Shame hoWARd shame on you.

Preventive Detention: A Shield or A Sword?

There is a consensus among educated Australians that Preventive Detention is inimical to the democratic evolution of our country. Many are those who argue that given the standards of our time preventive detention is an unnecessary evil.

Who cares about history and legal precedence?

So for all these reasons you should be terrified of history and legal precedence?

A Senate inquiry into the proposed anti-terrorism laws will start advertising today for submissions.

Public hearings are likely to start in nine days and are expected to be held in Sydney, Melbourne and Canberra.

After lobbying from the Australian Democrats, the Government has agreed to a three-week inquiry.

Mutiny on the bounty hunters

The big news today, well some of us had wind of it that the Shoot-to-Kill bluff was part of the cog in the machinery of the police state and that the prime meanster john HoWARd would be forced to concede ha, ha, ha, to the state pre-meditators and we'd suck on the rest of the draconian laws like a lolly-pop for our children to chew on in generations to come.

Perhaps some rear-view vision may help you when considering the laws now being proposed regarding arbitrary detention. It is somewhat gratifying that international treaties are belatedly being cited as reasons to oppose this slide into dictatorship, but it is odd that no-one seems to remember what underpins our personal freedom here and the whole of our legal system.

Australia's 'Anti-Terrorism' Bill: the framework for a police state

Over the past month, Prime Minister John Howard and the six Australian state premiers and two territory chief ministers have joined hands to draft draconian new laws that will erect the juridical scaffolding for a police-state. The Anti-Terrorism Bill 2005 is unprecedented in both its content and in the conspiratorial methods that have been employed to push it through the state and federal parliaments.