The first book-length expose of CIA kidnappings and prisons -- two of the greatest evils in the Bush government, and the world -- by the Italian investigative journalist Guido Olimpio is here, and it's new and as current as todays news stories about secret jails the CIA runs! The book is a must-read for anyone wanting to know about the CIA's practice of "rendition": kidnapping people and transporting them to places like Egypt for torture. It's an extremely controversial practice, a threat to America's security and character, and a sweat-provoking threat to potential victims and an insult to the sovereignty of countries like Italy and Sweden. Read the book, and your reactions will range from cold sweat to boiling mad. 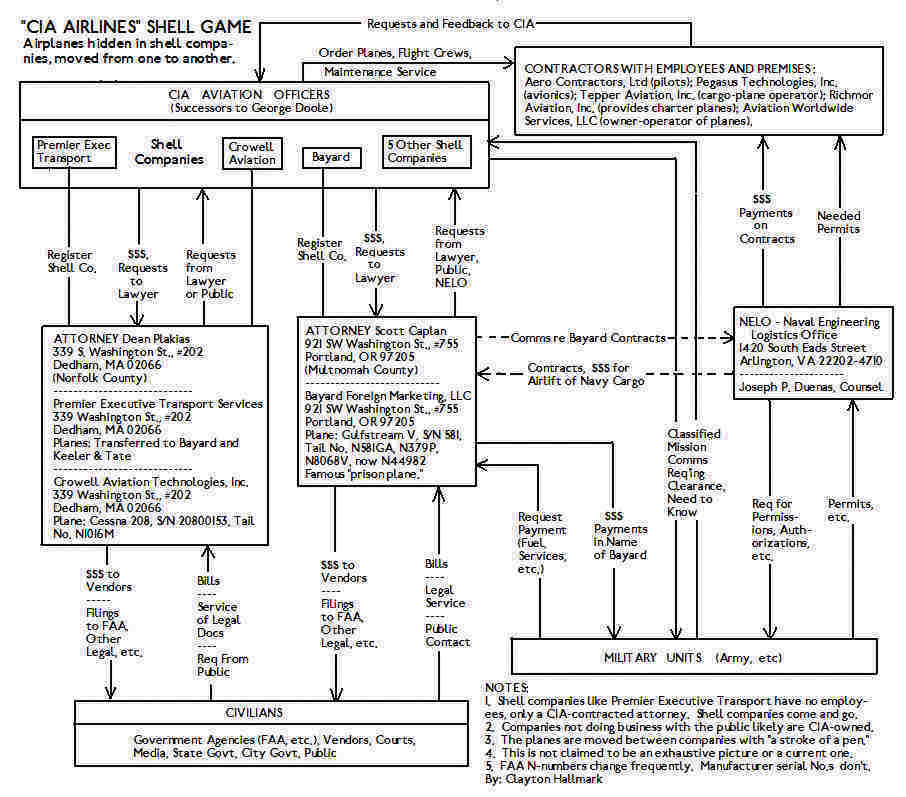 How the CIA's Prison Airline Works

Guido Olimpio is no leftist conspiratorialist. He is a serious journalist at one of Italy's largest newspapers. An expert on the subject of the times, terrorism, Olimpio comes highly recommended. Michael Ledeen, no less, one of the most radical of neoconservatives, recently refered to the author as "a very smart Italian journalist named Guido Olimpio." Neither left nor right, Olimpio is dead on target with this explosive expose.

[Table: Not from book: my own explanation of CIA's airline.]

The name "Hotel California," taken from an Eagles song, was intended as a metaphor for the CIA's secret prisons in some compliant Moslem countries. About two weeks after the book's October 2005 release in Italy, allegegations that there are also secret CIA prisons in Eastern European countries made world headlines and threatened the EU membership of the countries. Any connection with the book? Probably not, but the book clearly explains the news stories.

-------"Welcome to the Hotel California...Such a lovely place...You can check out any time you like, but you can never leave."
(Lyrics from "Hotel California")

Scores of Muslims -- some guilty of crimes, some innocent -- have been kidnapped by the CIA in Western countries and transported to non-Western countries where they can be imprisoned indefinitely without being charged, places where the CIA knows full well they will be tortured. .

Think that can't happen in America? Olimpio tells the story of Maher Arar, a Canadian-Syrian who was "just passing through" on an airline trip with the JFK Airport as a stopover. It turned out to be a trip from (and to) hell. Mohammed was arrested at JFK and transported to Syria for interrogation, where he was tortured before being released -- without charges. It was a case of guilt by association, Joe McCarthy style.

Another rendition "Operation Hotel California" recounts grabbed the top headlines of Italian papers for most of the summer of 2005. A watered-down version made its way into minor stories in some American papers. Abu Omar, an imam (cleric) at a militant mosque in Milan, was the victim of a CIA "rapito" (kidnapping) in February 2003. It was an attack on Italian sovereignty as clearly as Pearl Harbor was an attack on American sovereignty, since the Italian government, or so it claims, had nothing to do with it.

Abu Omar was tortured and maimed in an Egyptian hell hole (a Hotel California) as his American captor, CIA man Bob Lady, apparently watched. Omar got out briefly in April 2004, called home to report his fate, and was reimprisoned as his story came to the attention of the Italian police, who up to then had considered him a "missing person." In 2005 the story came to public attention, mainly in Italy, as a prosecutor obtained arrest warrants for 22 American agents, confounding Italy's allies in Washington.

The book tells the stories of dozens of hapless "check-ins" at the CIA's "Hotel California" locations. These are often like the Roach Motel product: "Roaches check in, but they don't check out." Except these check-ins are people, not roaches, and they often are less criminal than those who snatch them. It's a red-blooded 007 story that makes fiction spy-thrillers pale.

"Hotel" fully documents, with cross-references and citations, the torture methods and the secret CIA jails now famously coming to light.

"Operation Hotel California" is the definitive work on the unspeakable CIA practice of rendition, by an authority with over 20 years' experience investigating terrorism solely to alert its potential victims.

The only problem is, the book is in Italian. If like most Americans you are unilingual, or if your second language is not Italian, that leaves you out.