A month of events in November 2005 to remember what happened in Fallujah and other cities in Iraq and to demand justice for those attacked.

One year ago this month the US, with the support of the British, began its second major assault on the Iraqi city of Fallujah. This massive and unprecedented offensive killed many hundreds of civilians, destroyed much of the city's housing and created tens of thousands of refugees. An earlier attack in April 2004 had killed at least 600 civilians. See Jo Wilding’s report of riding an ambulance inside the city during the siege. Report

US forces committed major war crimes during the assaults including: bombing residential areas and killing many civilians; imposing a 'shoot-to-kill curfew' and using snipers to fire on unarmed civilians; targetting and shutting health facilities; and, using phosphorus weapons. See the Italian documentary showing use of phosphorus weapons, background to film.

Over twenty UK Remember Fallujah events are taking place including: non-profit film screenings; a national speaking tour with US author and activist Rahul Mahajan (in Fallujah during the April 2004 siege Report); an international teach-in, Voices from Occupied Iraq organised by Iraq Occupation Focus; vigils to mark the attacks on Fallujah last year; a screening in Manchester of 'Caught in the Crossfire' about the second seige of Falluja 'Jo Wilding's Diary from Iraq' by Manchester Indymedia.

See www.rememberfallujah.org for more information on all the events, on what happened in Fallujah and the ongoing attacks on Iraqi cities. 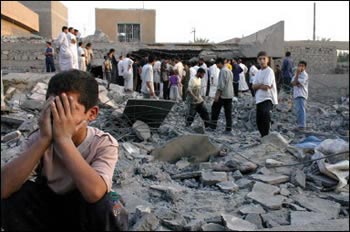 One year ago this month the US, with the support of the British, began its second major assault on the Iraqi city of Fallujah (an attack originally codenamed “Thanksgiving Massacre”). This massive and unpredented offensive devastated a city the size of Plymouth (the US State Department estimated 100% of the city’s housing was damaged to some degree) and killed many hundreds of civilians. British troops had been redeployed specially from southern Iraq to help form a “ring of steel” around the city.

An earlier attack in April 2004 had killed at least 600 civilians. See Jo Wilding’s report of riding an ambulance inside the city during the siege. Report

US forces committed major war crimes during the assaults including:

The November 2004 assault was trailed well in advance and generated a brief spurt of anti-war activity here in the UK. Reports

Since then, however, media reports on Fallujah have been few and far between, and the plight of the city’s inhabitants – including the estimated 200,000 civilians who fled the attack and have yet to return to their homes – appears to have been largely been forgotten. Not long after the assault the US and Iraqi leaders declared that Fallujah would become a "model city"' (Boston Globe, 5 Dec) and have used daily intimidation, curfews, ID cards, repression, torture and detentions to try and create it.

Meanwhile, further assaults during the past year on Iraqi cities including Qaim, Karabila and Tal Afar have killed many more Iraqi civilians and created thousands more refugees with little media coverage or response from the anti-war movement.

”My son got shrapnel in his stomach when our house was hit at dawn, but we couldn’t take him for treatment We just bandaged his stomach and gave him water, but he was losing a lot of blood. He died this afternoon” - Fallujah resident Mohammed Abboud, November 2004.

Month of events
It is vital that we do not allow the war crimes committed in Fallujah and the ongoing attacks on Iraq's civilian population to be forgotten. We also need to demand justice and compensation for the victims of these assaults.

The month will start on 8 November (a year to the day last November’s attack started), at the ICA in London with screenings of the films Occupation Dreamland (an award-winning documentary about marines in Fallujah) and Testimonies from Fallujah, followed by a discussion with author and activist Milan Rai. Milan Rai visited Fallujah on several occasions during the sanctions years and was convicted earlier this year of causing over £2000 worth of criminal damage when he spray-painted the Foreign Office with the slogan “Don’t attack Fallujah” just before last year’s offensive. Report.

Remember Fallujah is Sponsored by Brent Stop the War, Iraq Occupation Focus, Justice Not Vengeance, Sutton for Peace and Justice, Voices in the Wilderness UK and the Wrexham Peace and Justice Forum.