In 2003 Sarah Elizabeth Campbell took an overdose in her cell in Styal Prison. Despite her rapidly worsening condition the Prison authorities waited 40 minutes to call an ambulance. When it arrived it was held at the Prison gates for a further eight minutes. Sarah lost consciousness and died in hospital a few hours later. Pauline Campbell was informed of her daughter’s death by the Police by phone.

Ever since this tragedy Pauline has tirelessly campaigned for the rights of women prisoners. On Wednesday she took her unique form of protest to Holloway Prison which has just seen yet another suicide by a prisoner. 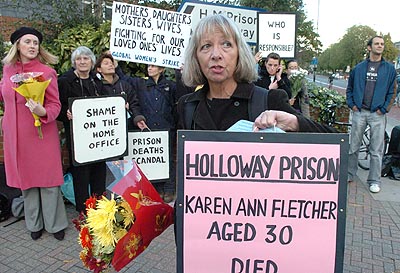 Waiting for the prisoner transport. 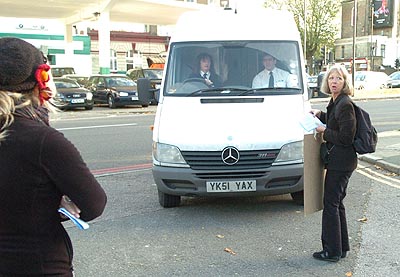 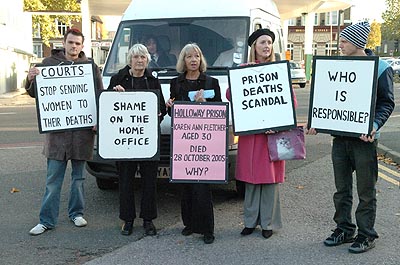 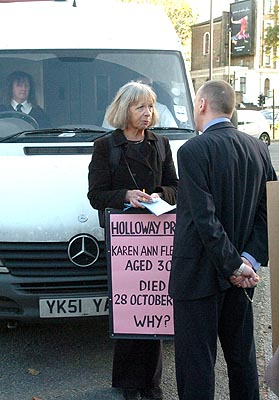 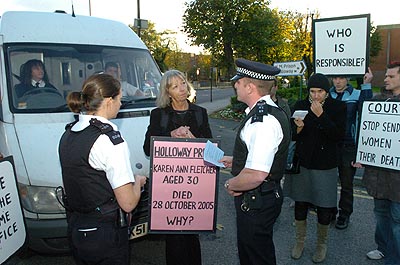 The cops show up. 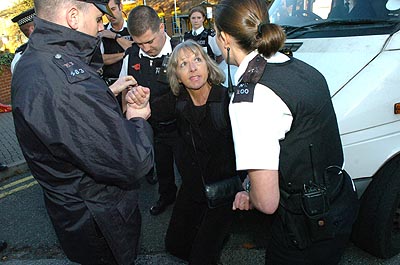 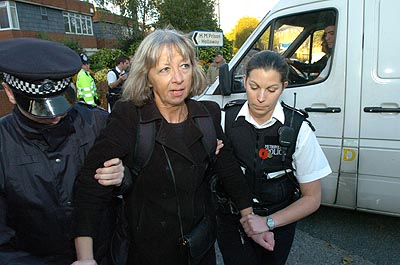 Later released without charge as authorities bottle it.

It’s a simple tactic. Pauline calls as picket of the jail and then waits for a prisoner transport to arrive. She then blocks its path arguing that the prisoner should be taken to a place where they will be properly looked after. The Police get called. Pauline gets nicked and gets the opportunity to highlight many of the facts and figures that the Prison service would rather keep quiet.

On Wednesday Pauline was joined by around 25 supporters including two ex prisoners. When the prisoner transport was halted the Duty governor arrived. He tried to persuade Pauline to move. She refused. Around 15 cops showed up and were equally unsuccessful in persuading Pauline to make her protest legal. So she was arrested for blocking the highway which seemed a little odd as the Governor had been arguing that she was on private property.

This is the tenth time that Pauline has been lifted in the past year. She has only been charged twice. On this occasion the cops decided that ‘It was not in the public interest to press charges’. In other words it is not in Holloway Prison’s interests to create another PR disaster. A court case would give Pauline the opportunity in the public domain to make the following facts known:
1)The death of Karen Ann Fletcher is the 4th at Holloway since last year.
2)The regime at the Prison has been repeatedly condemned by HM Chief Inspector of Prisons.
3)The Prisoners in Holloway share their cells with what has been described as a ‘serious infestation’ of mice and cockroaches.
4)Another prisoner remains in a coma after being cut down from a makeshift noose last year.