"Oh, your belly looks bad. All I know is if I had that rash on my belly by ... an incision site, I'd be at the hospital on some serious antibiotics." - Covance technician referring to the infected incision site on a rhesus monkey after irradiation. 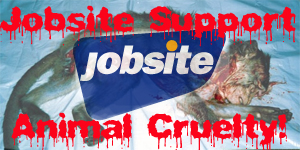 Jobsite issued a statement to the Covance Campaign about their advertisements for Covance, but soon after the adverts re-appeared. In their statement Jobsite said "Jobsite does not condone animal cruelty in any way." Covance have been exposed for animal cruelty numerous times, they were condemned by leading primatologist, Jane Goodall for the cruel conditions monkeys are kept in inside their labs. Workers were exposed for not giving adequate veterinary treatment to sick and injured primates. The comment at the top of this page was made by a Covance Primate Technician in the recent expose of their labs. By advertising for jobs as animal technicians for Covance, Jobsite are actively supporting animal torture. Please politely contact them about their lies. A sample letter is at the foot of this alert:

Cheryl Morgan is the PR Executive and issued the statement:

-----SAMPLE LETTER-----
Dear Sir / Madam, Jobsite,
Recently your firm issued a statement to The Covance Campaign regarding advertisements for Covance, a contract research laboratory who conduct animal experiments. In the statement, "Jobsite does not condone animal cruelty in any way." was said. Adverts have re-appeared on the Jobsite website for positions at Covance. By advertising for positions at Covance, you are actively supporting animal cruelty. Covance have been exposed numerous times and leading primatologist, Jane Goodall condemned the labs for their ill treatment of animals. Primates were left without adequate veterinary treatment. Covance?s daily business is poisoning animals to death including; dogs, cats, primates, guinea-pigs, rabbits, rodents, horses, farm animals and more. This is obvious animal cruelty, supported by Jobsite.

I would appreciate it if the advertisements are removed,
Yours Sincerely,