The second part of the World Summit on the Information Society (WSIS) is held from November 16 to 18 in Tunis, Tunisia. The first part of the UN sponsored event was held in Switzerland in December 2003, where people from all around the world gathered for meetings and actions during the official meeting in Geneva expressing protest under the slogan 'WSIS - we seize'.

The choice of place for the second part of WSIS - Tunis - is more than hypocritical for a summit on information society: While Tunisia is catching up economically with the capitalist North, it is far from any information society if you are talking about the freedom of information (report). Furthermore - and different to 2003 - it seems almost impossible to express protest against this summit. Nevertheless some initiatives and organisations called for alternative meetings. Some Human Rights Groups take part in the "Citizens Summit on the Information Society (CSIS)". Others try to bring in their ideas within the WSIS itself.

Free access to knowledge for everybody is not the goal of WSIS, and the summit organizers' plan is to concentrate on governmental and corporate use of information and communication technologies. This approach fits the choice of place. Yet, the summit does not only give legitimacy to a repressive regime, its focus also ignores the social and technological situation in the Magrebh region. The majority of people in this part of the world do not have access to communication tools and the authoritarian regimes in the region are reliable allies to the european governments in supressing freedom of movement.

Update 16 November:It is reported that Tunesia is blocking unofficial websites related to the WSIS. People said that they could not access Websites as wsisblogs.org or the CSIS Website from hotels or other places outside the official media centre. ( study on Tunesian internet filtering ). Furthermore there were reports of repressiv actions by Tunesian authorities against groups claiming freedom of speech in the days before the conference started. 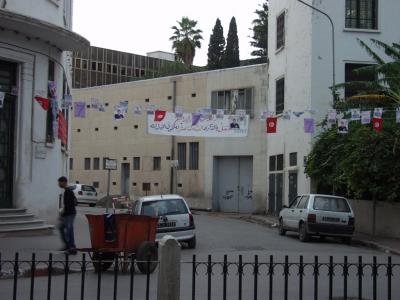